They extend from 6 ° 45 'to 13 ° 41' north, roughly along the 93rd east longitude west of the coast of Thailand and northwest of Sumatra . On 10 Latitude running ten-degree street (ger .: Ten Degree Channel ) separates the northern Andamans from the southern Nicobar Islands . Around a quarter of the 380,581 inhabitants (as of 2011) live in the capital Port Blair .

The Andaman Sea with the North Preparis Channel separates the territory from Myanmar to the east . The Andaman wood pigeon ( Macropygia rufipennis ) was chosen as the state bird , the state animal is the dugong , the native padauk tree represents the flora.

The territory of both archipelagos has been inhabited since prehistoric times. In the late 17th century , parts of the Andaman Islands were annexed by the Marathas . European colonized the Andaman Islands were from 1789 by the British East India Company . In the group of islands Nikobaren rose Denmark since 1756 claim. At the same time, it was an Austrian colony between 1778 and 1784 . In 1869 it became part of British India .

Before India's independence , the Andaman and Nicobar Islands served as convict colonies for members of the Indian independence movement due to their seclusion . The Cellular Jail built in Port Blair at this time , one of the first prisons with single cells, today keeps the memory of this fact alive in the rank of a national monument. The building with its formerly seven radially arranged cell tracts later also served the penal system of apolitical delinquents .

The Japanese occupation in World War II points to the strategic military importance of the island chain. India takes this into account today with a not inconsiderable presence of navy , air force and army (including a Gurkha regiment ). The reigning representative of the central government, the Deputy Governor (lieutenant governor), is a senior usually military personnel .

On December 26, 2004, an earthquake in the Indian Ocean (9.0 on the Richter scale ) and the resulting tsunami waves wreaked havoc on the Andaman and Nicobar Islands. More than 2,000 people were killed, more than 4,000 children were orphaned or lost a parent, more than 46,000 people were injured and at least 40,000 people were left homeless. Of the inhabited islands, Katchal , Car Nicobar , Nancowry and Groß Nikobar , among others , were most affected. While Trinket split in two, some uninhabited islands and coastal strips of larger islands sank due to the shifting of the tectonic plates below sea level, so that the Andaman and Nicobar Islands lost 120 km² of land to the sea. 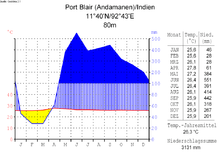 The climate is tropical , the water temperature is around 24 ° C all year round, the air temperature fluctuates between 18 ° C and 34 ° C. A light wind makes the high humidity (approx. 66 to 85%) bearable. The average annual rainfall , caused by the monsoons in Port Blair, is 3,180 mm on around 150 rainy days.

A large part of the 572 islands with a total of 8,249 km² (Andaman 6,408 km², Nicobar Islands 1,841 km²) is planted with tropical rainforest . The highest peaks are Saddle Peak on North Andaman with 730 m height and Mount Thullier on Groß Nikobar (642 m). The largest islands are Middle Andaman Island (1,536 km²), North Andaman Island (1,245 km²), South Andaman Island (1,210 km²) and Great Nikobar (1,045 km²), the smallest is Ross Island with 0.8 km². The chain of islands represents the peaks of an underwater mountain range that is part of the alpine orogeny from the Pyrenees to Indonesia . The origin of the heavily folded sedimentary rock goes back to the Cretaceous period . There are also some coral atolls and two islands owe their formation to volcanic events.

Strict fishing and hunting regulations protect the extraordinary biodiversity of the marine fauna. 27 of the approximately 60 species worldwide have been identified in the mangrove forests of the islands.

According to the 2011 census in India , the union territory has 379,944 inhabitants. Only 37 of the islands are inhabited, almost 90% live on the Andaman Islands and a good 10% on the Nicobar Islands. A third of the population lives in the capital Port Blair, 36% of the population live in cities. The population density with 46 inhabitants per square kilometer is one of the lowest of the 29 Indian states and 7 union territories (see Andaman / Nicobar in India-wide comparison ).

6 Scheduled Tribes (registered tribal peoples) are officially recognized on the islands and are  entitled to (central) state protection and support:

Except for the Nicobarese, all of them belong to the “particularly vulnerable tribal groups” ( PVTGs: Particularly Vulnerable Tribal Groups ) and are guaranteed additional funding from the Indian Ministry of Tribal Affairs .

In February 2010, the 85-year-old Boa Senior, the last member of the Bo tribe, died, the tribe is said to have settled there for 65,000 years. Her husband had died several years earlier after both surviving the 2004 tsunami, and she left no children. With her, her language died too.

The indigenous people of the Andamans are the linguistically, genetically and culturally related peoples of the Greater Andaman , Jarawa , Onge and Sentinelese . They are dark-skinned and curly-haired (so-called Negritos ) and live as hunters and gatherers . The contacts with the majority population vary in strength; the Sentinelese even live in complete isolation and reject any contact with the outside world. On the Nicobar Islands, the Shompen live as hunters and gatherers, while the Nicobarese also do horticulture .

Of the languages ​​of the indigenous population, the Nicobarese languages , which are spoken by the approximately 27,000 Nicobarese, belong to the family of the Austro-Asian languages . In contrast to earlier findings, the language of the Shompen also belongs to the Nicobarese languages, so it is not isolated. The Andaman languages , which are only spoken by a few hundred natives of the Andaman Islands, form a small language family of their own, which, as far as we know today, does not belong to any larger language family. (But see Indo-Pacific Languages .)

According to the 2011 census , Hindus make up the majority of the inhabitants of the Andaman and Nicobar Islands with 69 percent. There is also a larger number of Christians (21 percent) and a smaller Muslim minority (8.5 percent).

In addition to the extraction of diamonds , nickel , gold , selenium and sulphate , the export of tropical timber is an important economic factor. With the Chatham Sawmill, one of the largest sawmills in South Asia is located near the island's capital. The working elephants, which swim to their locations on the neighboring islands, should be unique.

Despite the cultivation of rice , coffee , bananas and coconut palms as well as cattle breeding, the archipelago is dependent on additional supplies from the mainland. Besides agriculture, fishing is another line of business.

An important source of income for the islands is tourism , the Andamans are partly accessible to tourists, the Nicobar Islands are not.

There are regular ship and air connections from Port Blair to Calcutta and Chennai . Occasionally there is also a ship connection to Visakhapatnam (as of 2004).

As a federal territory, the Andaman and Nicobar Islands have no independent parliament and no government. Administrative powers in executive and legislative terms are exercised by the Vice-Governor (since 2017 Devendra Kumar Joshi ). The area is under the judiciary of the Calcutta High Court , which has a branch in Port Blair .

See also : List of Lieutenant Governors of the Andaman and Nicobar Islands

The Andaman and Nicobar Union Territory is divided into the following three districts :

Located at the northern end of the Strait of Malacca , the islands are of significant strategic importance. India has military bases on the islands from which this supply route, which is important for China and other Asian countries, could be blocked in the event of a conflict or at least maritime traffic could be impaired. The islands thus give India a strategic advantage over China, which is confronted with the Malacca dilemma .