Sikkim ( Nepali सिक्किम Sikkim , Bhutia འབྲས་ ལྗོངས་ ′ Bras Ljongs or Denjong ) is an Indian state in the southern Himalayas between Nepal , China and Bhutan . With an area of ​​7,096 square kilometers and a good 600,000 inhabitants (2011 census), Sikkim is the second smallest state in India and the smallest in terms of population. The capital is Gangtok .

Kangchenjunga, the highest mountain in Sikkim and India at 8,586  m and the third highest in the world

Sikkim is located in northeast India in the eastern Himalayas . The state borders on the Indian state of West Bengal to the south, Nepal to the west, the People's Republic of China ( Tibet Autonomous Region ) to the north and east, and Bhutan to the southeast . With an area of ​​7,096 square kilometers (about a tenth of Bavaria ), Sikkim is the second smallest state in India after Goa .

The entire area is mountainous, the southern part of the promontory of the Siwaliks and the northern part is occupied by the high mountains. On the border between Sikkim and Nepal is the Kangchenjunga , at 8,586 meters the highest mountain in India and the third highest in the world. Sikkim is delimited by mountain ranges in three directions: In the north, the main ridge of the Himalayas forms the border with Tibet. In the west and east, the Singalia and Chola Mountains , two side chains that run south from the main ridge, border Sikkim against Nepal and Bhutan. The Tista , a tributary of the Brahmaputra , runs between these mountain ranges from north to south. The border with West Bengal is formed by the Tista and its tributaries Rangpo Chhu and Rangit in the south . Sikkim's deepest point is 280 meters in the Tista river valley on the border with West Bengal.

Due to its exposed location, which enabled good access from India to Tibet , Sikkim achieved strategic importance at an early stage . From 1641 to 1975, Sikkim was a kingdom under the Chogyal ( Tib . : chos rgyal ; "Dharma King"). Since the end of the Gurkha War (1814-1816), the British East India Company exercised some influence in Sikkim. In 1835 Sikkim had to cede part of the Darjeeling region to the company. Further territorial losses followed in 1849 and 1861 - the capture of British nationals served as an excuse. Furthermore, the company had to be granted full freedom of trade. In the following years imports and exports (mostly wood) fell sharply. 1861 Sikkim was the Treaty of Tumlong de facto a protectorate of the United Kingdom .

In early 1888, Tibetans invaded the country and occupied Fort Lingtu . However, the occupiers were driven out again by an expeditionary force immediately sent by the Viceroy of India. The Raja , a British government retiree who was close to the Tibetans, was subsequently further restricted by the British, while the Chinese government disavowed the conduct of its officials. At that time Sikkim had around 75,000 inhabitants, most of whom belonged to the Lepcha tribe . With the establishment of the Princely Chamber to represent the Princely States in British India in 1920, the Chogyal was also represented in it. After Indian independence in 1947, Sikkim, like all other princely states, became formally independent. However, none of the princely states could maintain independence for long, and this did not seem a realistic option. Gradually, the princely states of India or Pakistan joined.

On December 5, 1950, a treaty between Sikkim and India was concluded, according to which Sikkim became a protectorate of India. Sikkim retained self-government in internal affairs, while foreign policy and defense should be taken over by India. India also expressly reserved the right to station troops in the country if necessary. Sikkim was completely included in the Indian customs and economic territory.

In 1973 there was an attempted coup by the Nepalese population group, which the Indian secret service had supported. Then Indian troops marched in . The constitutional monarchy was introduced in Sikkim. India also took over the internal administration of the country. On March 1, 1975 Sikkim was granted the status of an Associate State of the Indian Union.

On April 14, 1975, a referendum strongly influenced by India was carried out, in which 60,000 of around 97,000 eligible voters were in favor of joining the Indian Union. Only 1,500 eligible voters voted against joining. On May 16, 1975, Sikkim, under the leadership of Chief Minister Kazi Lhendup Dorji Khangsarpa, declared its accession to India as its 22nd state. The king Palden Thondup Namgyal was expelled from the country because he did not recognize the accession to India. He then fled to Calcutta and died in New York in 1982. His successor and son Wangchuk Namgyal recognized Indian sovereignty and was therefore allowed to re-enter the country in 1985. The subsequent dispute between India and neighboring China over recognition of this step was only contractually settled in April 2005. 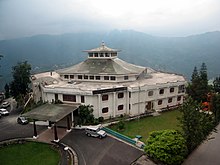 The legislature of the state of Sikkim consists of a unicameral parliament , the Sikkim Legislative Assembly . The 32 members of Parliament are elected by direct election every five years . 31 MPs are elected in individual constituencies according to the relative majority vote. Another MP is elected by the monks and nuns in all Buddhist monasteries in Sikkim. This is to ensure that the Buddhist community is represented in parliament. The parliament has its seat in Gangtok . The Chief Minister of Sikkim is elected by Parliament. But is appointed by the President of India governor at the head of the state (governor) . Its main tasks are to appoint the Chief Minister and to entrust him with the formation of the government. Sikkim's highest court is the Sikkim High Court in Gangtok.

Sikkim has one member each in the Lok Sabha , the lower house of the Indian parliament, and in the upper house, the Rajya Sabha .

Sikkim's policy was long supported by the Sikkim Democratic Front (SDF, founded in 1993). In 1994 the regional party came to power and has since won the following state elections (1999, 2004, 2009, 2014). The major national parties from the rest of India, in particular the Congress Party and the Bharatiya Janata Party (BJP), on the other hand, only play a marginal role in Sikkim. In the election to Sikkim's parliament in 2009, the SDF won all 32 parliamentary seats. The Sikkim Democratic Front has also been successful in the Sikkim constituency since 1996 in the Lok Sabha elections. In September 2013, a parliamentary group under the MP and ex-minister Prem Singh Tamang (also known as PS Golay) split off from the SDF under the name Sikkim Krantikari Morcha (SKM). In the 2014 election in Sikkim, the SDF suffered losses, but was able to maintain its absolute majority with 22 out of 32 seats. In the following election in 2019, the SDF lost both the government majority in the parliament of Sikkim, as well as the one parliamentary seat that Sikkim has in the Lok Sabha, to the SKM, which then became a government on May 27, 2019 under the new Chief Minister Prem Singh Tamang made.

The four districts of Sikkim

Sikkim is divided into four districts (population and population density according to the 2011 census):

According to the 2011 Indian census, Sikkim has 607,688 inhabitants. This makes Sikkim the smallest state in India. The mountainous country is only sparsely populated: with 86 inhabitants per square kilometer, the population density is the third lowest in India after Arunachal Pradesh and Mizoram . The degree of urbanization is relatively low: only a quarter of the population lives in cities. Between 2001 and 2011, the population of Sikkim grew by 12.4 percent. At 82 percent, the literacy rate is above the overall Indian average (74 percent). The fertility rate was 1.24 children per woman (as of 2016) while the Indian average was 2.23 children in the same year. Sikkim had the lowest fertility among all states of India.

The composition of the population has changed considerably since the end of the 19th century: As a result of massive immigration from Nepal , ethnic Nepalese now make up the majority of the population. The long-established peoples of Bhutia (Denjongka) and Lepcha have become a minority. The Indian government counts the Bhutia and Lepcha among the "tribal peoples" ( scheduled tribes ), which gives them certain special constitutional rights. According to the 2001 census, 20.6 percent of the population of Sikkim belong to the indigenous population (13.0 percent Bhutia, 7.5 percent Lepcha).

Sikkim census population (within today's limits) since the first census in 1951.

The most widely spoken language in Sikkim is Nepali , spoken by the Nepalese , which according to the 2001 census is the mother tongue of 63.0 percent of the state's population. It belongs to the group of Indo-Aryan languages and is written in Devanagari script.

The indigenous population of Sikkim speaks the languages Bhutia or Denjongka (7.7 percent), Lepcha (6.6 percent) and Limbu (6.3 percent) , which belong to the Tibetan-Burmese language family . The Bhutia is related to the Tibetan and even more closely to the Dzongkha spoken in Bhutan . It is written in Tibetan script .

Lepcha and Limbu have their own scripts, the Lepcha script and the Limbu script . A number of smaller Tibetan Burmese languages ​​-  Sherpa , Tamang , Rai , Newari , Gurung , Mangar, and Sunwar  - are spoken by parts of the Nepalese immigrant population. The Indo-Aryan languages Hindi (6.7 percent) and Bengali (1.2 percent) are mainly spoken among immigrants from other parts of India .

In 1975 Sikkim became the 22nd Indian state. Its official languages ​​are Nepali, Bhutia, Lepcha, Limbu, Newari, Rai, Gurung, Mangar, Sherpa, Tamang and, since 1996, the eleventh, Sunwar. Nepali is used as the lingua franca. As everywhere in India, English is present as an educational language.

The largest religion in Sikkim is Hinduism , which is mainly practiced by immigrants from Nepal and the rest of India. According to the 2011 census, Hindus make up 58 percent of Sikkim's population. 27 percent are Buddhists .

The majority of the indigenous population of Sikkim follow Vajrayana Buddhism, but there are also Buddhists among the Nepalese immigrants. Although its followers are now only the second largest religious group, Buddhism is still strongly represented in Sikkim as the former state religion. There are 75 Buddhist monasteries in the small state. Alongside Ladakh , Sikkim is one of the most Buddhist regions in India.

10 percent of the population of Sikkim are Christians . Most of them are members of the Lepcha people who were evangelized in the 19th century. Muslims are only a very small minority at 1.6 percent.

With a per capita gross domestic product of 176,491 rupees (3,861 US dollars ) in 2015, Sikkim ranked second out of 29 Indian states. Sikkim's economy is mainly dominated by agriculture. Tourism is playing an increasingly important role for the state.

In Sikkim, organic farming has been practiced exclusively since the end of December 2015 . More than 76,000 hectares of land are cultivated by around 66,000 farmers. The products are certified according to the Indian organic standard NPOP or the US standard USDA-NOP. In 2018 Sikkim received the Future Policy Award for this agricultural turnaround .