The Tibetan script is one of the Indian scripts . Like this, it is an intermediate form of alphabet and syllabary , a so-called Abugida . Due to its syllable structure, it differs fundamentally from the other Indian scripts. The Tibetan script is mainly used to write the Tibetan language in Tibet , the Dzongkha in Bhutan and the Bhoti in the Indian Union Territory of Ladakh . It is the script in which the sacred texts of the Tibetan Buddhists are written. 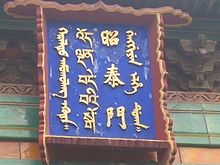 Mongolian , Tibetan, Chinese and Manchurian script in the Lama Temple in Beijing

Like many other Indian scripts, the Tibetan script has its origin in the Brahmi script , which was first used in the 3rd century BC. Is occupied. Over the course of time, numerous regional variants developed from this font, some of which differ greatly.

The invention of the Tibetan script is traditionally attributed to Thonmi Sambhota . This is said to have been sent to northern India (probably to Kashmir ) in 632 AD on the orders of the King of Tibet, Songtsen Gampo , to learn the local script and adapt it to the Tibetan language. According to current knowledge, the resulting Tibetan script is based on the Gupta script .

Although this narrative is still widespread, there is increasing doubt that Thonmi Sambhota really invented the Tibetan script. In Tibetan annals that were discovered in Dunhuang , it is written that the Buddhist texts were translated in 655, which, given the length of time, could hardly have happened so soon after the invention of writing. In addition, an inscription was found in Gopalpur, India, in a script almost identical to the Tibetan script, which was dated to the year 500 AD, well before the alleged invention of the Tibetan script.

The older style of this font དབུ་ ཅན dbu can (“with head”) from the 7th century is still the common print font today . It is extremely similar in shape to the Gupta inscriptions. As cursive common དབུ་ མེད dbu med ( "headless") only came to around the 12th century. There are numerous cursive scripts that fall under the term dbu med ; the most famous representatives include the འབྲུ་ ཚ 'bru tsha and the འཁྱུག་ ཡིག ' khyug yig . The difference between the two fonts is that the dbu can has a top line (a head) that is missing from the slightly more italic dbu med .

Title page of a Tibetan-English dictionary

As with the other Indian scripts , the Tibetan script is an intermediate form of the alphabet and syllabary , a so-called Abugida . In an Abugida, any consonant that does not have a vowel sign has the inherent vowel a . This inherent vowel can be changed by adding vowel signs that are positioned above or below the consonant sign. The consonant ཀ is therefore a ka , while ཀི is a ki . The Tibetan script is written from left to right and does not distinguish between uppercase and lowercase letters.

As a big difference to the other Indian scripts, the syllables in the Tibetan script are separated by a character called ཚེག tsheg , which looks roughly like a small triangle and is at the level of the topline . According to the rules of Tibetan orthography , a syllable may contain an initial, a basic letter with a vowel mark and an end. So z. B. the word བདུད bdud ("demon") from the initial b , the basic letter you and the final d . The initial and final sounds are usually no longer spoken in modern Tibetan, but are still written.

Another difference to other Indian scripts is that the ligatures for consonant clusters are only written vertically from top to bottom and never horizontally from left to right, as is the case with most of the ligatures in Devanagari .

Compared to the other Indian scripts, the Tibetan script has only a few vowels, which is due to the fact that in classical Tibetan the vowel length was not meaningful.

In contrast to the other Indian scripts, the Tibetan script has no independent vowel characters. The symbol dar is used to represent individual vowels without associated consonants . This serves as a kind of vowel carrier, since it has no sound value itself, but can carry any of the four vowel signs or the inherent vowel a.

The Tibetan script does not recognize any signs for diphthongs either , but these can be provisionally formed with the consonant འ ', for example to represent foreign proper names in the Tibetan script.

Table of consonants in the Tibetan script

The Tibetan script has 30 consonant signs (including the vowel carrier, which itself is not a sound). The transliteration is shown in this table without the inherent vowel a, which is normally always present when the consonant does not have a vowel sign.

The letters ཙ ts , ཚ tsh and ཛ dz were created by adding a small hook called ཙ་ འཕྲུ tsa 'phru to the respective letters ཅ c , ཆ ch and ཇ j , as they have no equivalents in other Indian scripts. The tsa 'phru is sometimes used - similar to the Indian nukta - to create additional characters to represent foreign words, such as ཕ ༹ f from ཕ ph or བ ༹ v from བ b . Today these sounds are mostly represented by consonant clusters, for example for the f ཧྥ h + ph . The character ཝ w was created later in order to be able to write foreign words from Sanskrit that begin with this letter.

The consonant འ ' , called ཨ་ ཆུང a chung in the Tibetan language (“small a”, in contrast to ཨ , which is called ཨ་ ཆེན a chen “ capital a”), has no sound value. It is usually used as a vowel carrier in the internal and final form, but can also appear as a basic letter like the ཨ .

In contrast to most of the other Indian scripts, clusters of consonants in the Tibetan script do not merge in horizontal ligatures, but are written vertically from top to bottom. The descender may be omitted, but the consonants themselves do not change their form. The vowel sign u is always written under all consonants. For example, the consonants ས s and ད d and the vowel sign ུ u result in the consonant cluster སྡུ sdu . In modern Tibetan, up to three consonants can be written one below the other, in classical texts, in some cases, much larger chains can be found.

However, there are a few exceptions that must be noted:

The following table shows all the special cases mentioned using the example of the consonant ཀ ka . 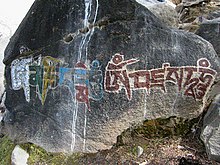 Manistein with mantras in Tibetan script

Often words from Sanskrit are also taken over into Tibetan. In order to be able to reproduce the sounds of Sanskrit in the Tibetan script, various extensions were introduced. As a rule, these are not included in the Tibetan alphabet.

In contrast to Tibetan, Sanskrit distinguishes between short and long vowels. To show the length of the vowel in writing, a reduced འ ' is appended to the consonant at the bottom right. This signals a long vowel and can be combined with the normal vowel signs.

The Sanskrit diphthongs ai and au are represented by doubling the corresponding vowel symbols e and o .

The cerebrals that Tibetan lacks are represented by mirroring the corresponding dental consonants.

Some special characters have also been adopted to correctly represent Sanskrit words that use these characters. These include the Visarga , Anusvara , Chandrabindu , Virama and Avagraha .

The Tibetan script uses its own punctuation marks. Apart from the already mentioned tsheg, there is also the ཤད shad , a vertical horizontal bar that occurs in several variants. A single shad closes a paragraph, two consecutive shad an entire section of text.

There are also the called ཡིག་ མགོ yig mgo ( "Head mark"). This used to be used to mark the title page of a book, as traditional manuscripts usually do not show which title page is, but it is also used in modern texts.

The Tibetan script has its own numerals , which have the same origin as the numerals of the Devanagari.

There are also so-called “half digits”. These look exactly like the normal digits, but have a diagonal line. They are used to represent fractions, but are very rare.

There are several systems for transcribing the Tibetan script. The difficulty is in deciding whether the script should be represented in the transcription or the pronunciation, as the two are very different in Tibetan.

Unicode encodes the Tibetan script in the Tibetan Unicode block in the code range U + 0F00 – U + 0FFF.

The following text is the Tibetan translation of the first article of the Universal Declaration of Human Rights .

The following table lists the basic letters in their usual learning order. The syllable in Latin script below each Tibetan letter follows Wylie spelling. The underlines and underlines do not belong to the Wylie transliteration, but characterize the tones, ā means a with a high tone, a means a with a low tone. To the left of each letter is a small film showing the stroke order and pronunciation.