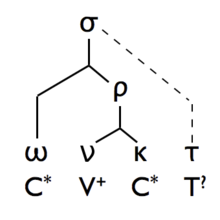 Syllabary scripts are phonographic "phonetic transcriptions" in which the characters ( graphemes ) predominantly represent larger units than the letters in alphabetical scripts (which have phonological segments , i.e. consonants Cand vowels V, correlate). The actual syllabary is to be distinguished from an Abugida , which consists of characters for sound segments that are grouped together to form a syllable representation.

The inventory of a syllabary's syllabary , and usually includes a few dozen to a few hundred characters , the Syllabogramme be mentioned. Syllabary fonts are thus in the visual complexity between alphabetic segmental fonts and morphographic "picture fonts".

For each “syllable symbol ”, a maximum of one whole spoken syllable (σ) is shown, but often only parts of it that have to be combined with one another. Most often these are CV-Syllabograms, i.e. combinations of initial and peak (ων), rarely the other way round VC.from peak and final (νκ), both usually combined with the “vowel mark” Vfor the peak (ν) and occasionally also individual "consonant signs" C.

Most of those in antiquity, but also those that were autonomous up to the middle modern period, i.e. H. without much influence existing Verschriftungen developed so-called. indigenous writing systems use solely or principally with syllabic signs, which suggests that it may here involve the intuitive approach of Verschriftung. The variety of syllabary fonts is correspondingly high. Due to the predominance of segmental scripts in Europe and the Middle East, as well as the colonization and missionary work of large parts of the world, which brought script to previously scriptless cultures and in some places displaced existing scriptural traditions, the Latin alphabet is predominant today.

The type of (partial) syllables that the syllabograms of a syllable script can represent without detours depends mainly on the phonological peculiarities of the language for which the script was (originally) created. Some spoken languages ​​have a relatively regular and limited inventory of syllables, which for example (almost) only consists of open (/ π ∨ ν /) or optimal syllables (/ ων /) or (almost) only allows single consonants in the margins (/ Cν /, / ν C/, / Cν C/, / ν /). Since the necessary number of syllabograms can be kept low by these restrictions on phonetic diversity, these languages, unlike German with its consonant clusters as in Strumpf , are particularly suitable for syllabary scripts. In order to be able to write irregular syllables or to use the script in another language, orthographic rules are being developed that assign a new sound to the combination of two syllable characters.

In a literalized society, the writing system used always has an influence on phonological perception. For example, there is only one explicit coda character in Japanese syllabary that stands for a nasal closure (/ n, m, ŋ / etc.) and is usually transliterated as ‹ n ›. As a result, many Japanese believe that they hear and speak a / u / or / i / even if a word ends with a corresponding syllabogram, although these vowels are mute (/ CVC./), which is also used in the transcription of other languages.

The Inuktitut syllabar has next to CV- also V-Syllabograms that are structured very regularly, so it is synthetic and systematic. Since the characters in / a / superscript also have to be used as final consonants, it is spurious.

The characters in “synthetic syllabary scripts” are partly motivated by the fact that certain characteristics are repeated within a row or column if they are sorted in a table according to the vowel core and the beginning or end margin. The syllabary is also systematic if all phonetic segments correspond with graphic properties. Both occur mainly in specifically developed modern syllabary scripts.

Other syllabary scripts use arbitrary syllabograms without recognizable similarities to one another and are called analytical (e.g. Kana ). These characters have often emerged from logographic forerunners over time, in that word characters were only used for their pronunciation and no longer for their meaning and were possibly graphically simplified.

In a real syllabary , each character stands for a syllable of the corresponding language (e.g. Cherokee ), i.e. H. a real syllabogram covers all parts of a syllable, i.e. (according to western phonology) initial, peak and final. Since both the beginning and the end margin, i.e. the entire syllable shell , are optional at least in some languages, there are start ων / β , core ν , end νκ / ρ and full syllabograms ωνκ / σ , although in most syllabary there are only simple ones Start- CVand core syllabograms V be used.

In the spurious syllabary scripts , the syllabograms have to be combined in part to form a spoken syllable, e.g. B. in the Japanese writing system〈CV〉 + ん ⟨n⟩ = / CVn / or ⟨ C i j V ⟩ = / Cj V/. Kana, in particular, is therefore also called Morales , because its syllable characters cannot contain a long vowel or diphthong or a nasal coda or a cluster of consonant and semi-vowel in the onset without a combination.

A syllabar is complete if it covers all possible syllables of a corresponding spoken language without having to resort to further graphematic rules in the writing system. In practice, this goal, which is similar to flat alphabetic orthographies, is never quite achieved.

A few writings, e.g. B. the Korean Hangeul , are based on segmental alphabets , but the segment characters are grouped syllable or morphemic in frames so that the reading unit is syllabic or morphemic. They are counted among the syllabary scripts if the term is based on a functional and not an operational view, i.e. H. if the practical application in reading and writing is considered instead of the theoretical analysis basis.

In many Indian scripts ( Abugida ) there are (often diacritical) vowel marks, but the most common vowel (mostly / a / ) is not written with its own character, on the contrary, there is often a special character ( e.g. Virama ) with which this "inherent vowel" can be suppressed. These fonts can be classified either subtractively as syllabary or additively as segmental script:

Many writing systems with letter fonts also have a small syllabic part, in that when separating words with the stroke that is only visible at the end of the line, a separation can only be made after complete syllables or morphemes ( syllable separation ).

The following fonts are syllabary fonts: