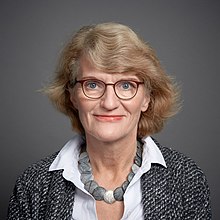 Christa Dürscheid (born October 4, 1959 in Kehl-Kork , Baden-Württemberg) is a German linguist . She teaches as a university professor at the University of Zurich , Philosophical Faculty, and holds the Chair for German Language, Department of Linguistics. Her research interests lie in the area of grammar , the language teaching , the font Linguistics , the Varieties and the media linguistics . In addition to numerous articles, Christa Dürscheid also wrote two study books, Syntax. Basics and theories as well as an introduction to script linguistics .

After studying German, French and educational sciences in Freiburg and Cologne from 1978 to 1981, she completed her doctorate in 1988 with a dissertation on the subject of pre-occupation in German verb- second structures . In 1998 she completed her habilitation with the work Die Verbalen Kasus des Deutschen. Studies on syntax, semantics and perspective .

In 2002 she accepted a professorship for German language, especially contemporary language, at the University of Zurich and turned down the call for a C-3 professorship for German linguistics at the University of Erlangen-Nuremberg . In 2006 she undertook another lecture tour that took her to Japan (Tokyo, Osaka). From 2006 to 2009 she was Vice Dean for Teaching at the Philosophical Faculty of the University of Zurich. From 2006 to 2011 she headed the National Fund project “Writing Competence and New Media”. Since 2011, together with colleagues from Germany and Austria, she has headed the international research project "Variant Grammar of Standard German" (funded by the SNSF, DFG and FWF). Christa Dürscheid was also in the program management of the Sinergia project "SMS communication in Switzerland: Facets of linguistic variation in a multilingual country" (funded by the SNSF). Since 2016 she has been leading the sub-project “Language Design in WhatsApp: Icono / Graphy”, which is part of the Sinergia project “What's up, Switzerland?” Together with Federica Diémoz.