This article deals with the topic in general terms. For the spelling of German see German orthography . 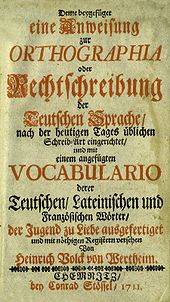 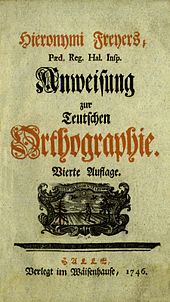 An early textbook of orthography in 1746

The orthography (also orthography ; from Latin orthographia , ancient Greek ὀρθός orthós "upright", "correct" and -graphy ) or spelling is the generally accepted spelling of the words of a language in the script used . Any spelling that differs from this is generally referred to as a spelling error.

There are two fundamentally different approaches to spelling in alphabet fonts:

The phonemic approach usually refers to only one standard variety of the language in question. In this sense, the orthography of Bulgarian , Finnish , Georgian , Italian , Serbian , Spanish and Turkish is predominantly phonemic . The spelling of Spanish, for example, is more phonemic for Castilian Spanish than, for example, for Argentine or Cuban (which, of course, do not understand each other as subordinate dialects, but rather as high-level Argentine or Cuban language).

What is particularly striking is the strongly etymological morphophonemic spelling of English . In English, a sequence of letters (e.g. ough ) can have four or more different pronunciations; conversely, a certain sound sequence can have many different spellings, depending on which word it occurs in, e.g. B. According to the [⁠ ʃ ⁠] ( unvoiced fricative postalveolar , "sh") as o c fi ean, sh , ac ti on, s acid, etc..

See also : ghoti  and The Chaos

The spelling of German has both phonemic and morphophonemic elements (not shown hardening of the final voices , e / ä spelling, etc.), but with relatively few etymological spellings (an exception are many newer foreign words and some homophones ). Especially with loans from English spelling is rarely to the German phonetic picture adjusted ( biscuit , strike , but not (grain) Fleks , Kompjuter , march Mello u. Ä.). However, were with the spelling reform of 1996 some Eindeutschungen in this area introduced (z. B. ketchup , wallet ,) but have not done consistently (eg. As boutique with e for Boutique [Butik], spelling with h for orthography [ɔʁtoɡʁafiː ]), were not consistently continued and some were canceled again (e.g. ketchup ).