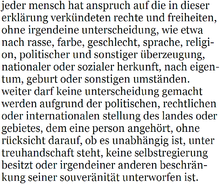 Under lowercase ( verb : small writing , before the spelling reform of 1996 : Write small ) is the use of small letters on letters.

While “consistent lower case” means avoiding all capital letters, “moderate lower case” (which is also referred to as “moderate upper case ”) allows certain cases of capitalized words, for example at the beginning of a sentence or in proper names .

Today's lowercase letters developed from the Carolingian minuscule as an administrative script under Charlemagne . The traditional Latin capitalization (uppercase) has been replaced by lower case letters that can be executed more quickly and are easier to read for reasons of everyday practicality. At first all capital letters without exception were rewritten in lower case; the use of capital letters to emphasize certain words in the middle of a minuscule text developed only secondary.

The capitalization in the German emerged in Baroque . Through German typesetters and printers, capitalization and the grammatical comma also spread into Danish , which was also a written language in Norway through the Union (1521-1814). In Swedish and English , too, it was customary to emphasize all or the most important nouns (or other words) in the sentence by capitalizing them into the 18th and 19th centuries. For example, it can be found in the original text of the United States Constitution of 1787 and in the Canadian Constitutional Act of 1867.

Jacob Grimm expressed himself as an opponent of capitalization as early as 1854: "I shook off the equally reprehensible misuse of uppercase letters for the substantive, which our pedantic naughty summit can call us [...]." He had already written in his grammar beforehand :

“It is not too late, and easy enough, to renounce such an embarrassing and useless spelling, which only Danes and Litthauer have been burdened by us, Swedes and English soon after the first try, with more correct tact and a more healthy sense of language, put aside again . even in our midst, it has never fully penetrated: there were still in the 17th and 18th centuries. writers who, with disdain for innovation, did not allow traditional simplicity to become statute-barred. [...] whoever [writes] big letters for the initials of the substantive writes pedantically. "

The use of lower case by some authors of the 19th century always went hand in hand with the use of the Antiqua as a sign of modernity. The German poet Stefan George always wrote in moderate lower case and had his poems printed in his own font.

In 1925, the Bauhaus made lower case its program: “We write everything in lower case because it saves time. also: why 2 alfabets when one achieves the same thing? why capitalize when you can't speak big? ”Inspired by this, the dj.1.11 follows the principle of lowercase letters, which also influences other groups in the youth movement.

In 1934, the city ​​administration of Biel , Canton Bern , used lower case letters for half a year.

The moderate lower case was reintroduced in Norwegian in 1869. Denmark followed in 1948. Since then, nouns have only been capitalized in German (including Low German ), Luxembourgish and some (not all) North Frisian dialects within the Latin writing system . Exceptions for the lower case in the German-speaking area can be found in the literature of the German-Danish mixed language Petuh .

The Viennese group around HC Artmann , but also Elfriede Jelinek , advocated the equivalence of all parts of speech in their Dadaist tradition and saw their unnecessary advantage in the capitalization of nouns . Jelinek later discarded the lower case.

For practical reasons, the German graphic artist and typographer Otl Aicher preferred to use lowercase letters in his designs and publications. Heinrich Böll noticed in 1973 that a language loses neither its informational value nor its poetry when it changes from upper case to lower case. Various groups on the left used lower case in their documents.

The commission of the German spelling reform of 1996 advocated the introduction of the moderate lower case, but failed due to political resistance, so that as a result some members left the commission.

the daily newspaper , which has been writing its title in lower case since 1982, published an issue in a moderate lower case on August 12, 2004 in response to the announcement of some German publishers that they wanted to return to the old spelling.

The argument against lower case letters is that they disrupt the flow of reading . The distinctive capital letters help the eye to orientate in the text. The capitalization of the nouns also makes it easier to read across the page , as these are particularly important for understanding the text and can be grasped more quickly thanks to the emphasis.

On the other hand, one argument in favor of a moderate lower case is the elimination of most of the rules for lower and upper case. Errors, such as those that often occur with substantiated verbs and adjectives, for example , can be avoided. But you still need two alphabets . The moderate lower case emphasizes proper names in the typeface more clearly.

Previous studies on the topic have come to different results.

In two frequently cited studies from 1989 (Bock, Hagenschneider & Schweer and Gfroerer, Günther & Bock), the reading speed and the understanding of the text when the first letters were spelled differently were examined. The studies differed in terms of their objectives, but in some studies they overlapped when comparing the legibility of Dutch texts by native Dutch speakers. In Dutch, as in English, the moderate lower case is used.

In the context of the overlapping studies, the moderate lower case, familiar to the test persons, was compared with the use of various other spellings (including the German upper and lower case) on Dutch texts. The studies differed in both the measurement method and the selection of test subjects, but not in the texts. In Bock et al. the test persons consisted of 100 Dutch-speaking students who mastered German as a foreign language, at Gfroerer et al. 22 students who are native Dutch speakers and who also mastered German as a foreign language.

Although the two studies were sometimes ascribed the same result, they actually came to conflicting results. While Bock et al. the Dutch could read Dutch texts better in the usual lower case than when using the German rules, this was the case with Gfroerer et al. Conversely: The test persons there were able to read texts in their mother tongue with the foreign sentence-internal capital letters more quickly than those with the familiar moderate lower case. Both studies published in the same book suspected errors in the other study. Gfroerer et al. suspected that their measurement method using eye tracking was more accurate. Bock et al. contradicted this thesis and on their part assumed that the measurement method of Gfroerer et al. influenced the results because the subjects were restricted in their reading behavior. For the time-consuming eye tracking, the students were fixed on a dentist's chair with belts for the duration of the experiment. Of the 22 subjects, only the data from 15 could be evaluated.

A common feature of various studies is that German readers who have learned and automated reading with the noun capitalization of German texts read slightly more slowly on average for texts with the lower case letters they are unfamiliar with.

The "moderate lower case" is not used in the same way in all countries. In English, national names, languages, days of the week and holidays are capitalized, in French and Spanish only the national names and holidays, in Italian only the holidays, in Dutch only the national names and languages ​​and in the Scandinavian languages ​​all four categories are written in lower case. Only in English, as in German, are the names of the months capitalized. The spelling of institutions and titles is also different; so it is called Queen Elizabeth in English , but la pure Élisabeth in French , and in Danish, after decades of using only lower case letters, capital letters have recently been allowed again in such cases (today dronningen and Dronningen “the queen”). Also for the spelling of the propria consisting of several words ("(a certain) state" and "(a certain) church") there are no uniform rules, compare for example Danish America's Forenede Stater "United States of America" ​​and Den danske Folkekirke " the Danish People's Church ”versus Swedish America's förenta stater “ United States of America ”and Svenska kyrkan “ the Swedish Church ”.