Text example for the Carolingian minuscule 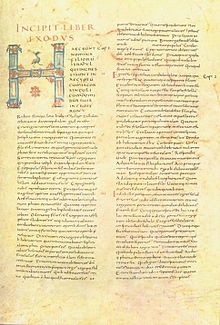 Late form of the Carolingian minuscule from the middle of the twelfth century: Beda's commentary on the Proverbs ( Bolzano City Archives )

The Carolingian minuscule is the stylization of everyday writing . So far it has been assumed that this was created in the court school of Charlemagne . A manuscript that was created around 765 in the scriptorium of Corbie under Abbot Leutchar shows first attempts to translate the Carolingian minuscule on three pages. This is the oldest documented script in Carolingian minuscule, a result of the progressive calligraphy of the younger Roman cursive . This new script then spread from the court school of Charlemagne, for example it also reached the monastery of Saint-Martin de Tours under the abbot Alcuin of York. It replaces the previously used Latin script in capital letters ( majuscule ) and the uncial , a font that was created by rounding off the letters of the Roman capitalis and the quadrata . The use and book fonts now follow a uniform pattern: the lowercase font has ascenders and descenders, the words are clearly separated from each other, the beginnings of lines can be emphasized with decorative or capital letters, the fine-bold contrast of the lines enables good legibility.

In Carolingian manuscripts, a font hierarchy is used with which the introductory pages were designed. In addition to an initial , at the top of the hierarchy and thus at the beginning of the page are the capitalis, if there is a need for further gradation, then uncial fonts and finally semi-uncials before the “normal” text in minuscule follows. However, many inexpensive manuscripts do not go beyond a two-level hierarchy (capitalis and minuscule).

The Rhaetian script is similar to the Carolingian minuscule.

Since the middle of the 8th century, the individual letters in the semi-italics , which are heavily interspersed with ligatures , began to develop again. The Carolingian minuscule can be found for the first time around 765 in Corbie. In the first phase, the Carolingian minuscule nevertheless still contained numerous ligatures and extreme regional forms. In a second phase that began around 820, the font design became more uniform, the letters were slimmer and almost always inclined to the right. In the late 9th century, the forms became increasingly rigid, often with marks and cuts, and the number of ligatures used is increasing again. In the 11th century, the oblique oval style, named after its shape for the "o", developed in southern Germany, which remained predominant for about 200 years.

Manuscript from the possession of King Ludwig the German , around 830 or around 870