This article covers the first letter. For the concept car, see Renault Initiale .

Initials are also called the first letters of a name . In this context there is only the plural form. Artists, for example, use their initials to sign a work . Most of the time, the letters are also designed artistically (e.g. with Albrecht Dürer ). But also in everyday work, initials are often used as an abbreviation of one's own name in short messages or e-mails, so Angela Merkel always signs her SMS with her initials "am". 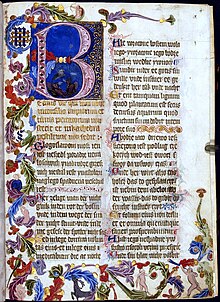 Document from 1768 with initials

In the past, initials were richly decorated. In today's typography , capital letters from larger font sizes are usually used as initials , which can be arranged in one or more lines and should stylistically match the basic font. After their placement in the text column Forssmann / de Jong (2004) in their book differ detail Typography following types of initials: detached initials , built initials , overhanging initials , scheduled initials and cassettes initials . Furthermore, the initials are differentiated there based on their shape: initials from a typeface , decorated initials and illustrated initials .

For example, if the text begins with a quote and thus a quotation mark is the first character, this character and the next letter are used as initials. However, Forssman / de Jong formulate restrictive in detailed typography (p. 288): “If the text begins with a quotation when using built-in initials, it is omitted. Only in the case of free-standing initials, whether they begin bluntly or after indentation, can the quotation from the basic font be placed in front of the initials, as shown, in the size of the basic font. "