Old volumes in a scientific library

Volume refers to a single book of a larger printed work consisting of several books with related content .

The term volume is also common in scientific journals for consecutively numbered annual volumes. For archiving in libraries, several editions of a journal appearing within a year are bound together in book form after the end of the year. Consecutive page numbers in the individual editions per year as well as annual tables of contents serve this purpose.

The term ribbon goes back to the verb to bind and refers to the fact that the individual sheets or printed sheets are actually tied together with threads. The tradition of designation continues, however, and is also applied to books that are not actually bound, i.e. those with adhesive binding . In the book trade as well as in printing , publishing and libraries , each individual book, i.e. each bookbinding product , is therefore generally referred to as a volume . 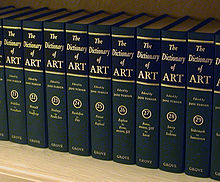 Part of the Grove Dictionary of Art , a specialist encyclopedia in bound form

Works by writers in paperback form, edited in several volumes

Multi-volume works can often be found at, for example

in works in which text and image parts (for printing and / or cost reasons) are separated, such as B. at Lexicon Iconographicum Mythologiae Classicae .
(To be distinguished from this is the individual illustrated book , which is mainly dedicated to the reproduction of visual material !)

if the register of a work is supplied in a separate volume.

in the case of works that are to be kept up to date by the subsequent delivery of supplements (e.g. in the case of printed reference works ) or where parts ( appendices ) that do not fit into the system are delivered in a separate volume.
In the case of magazines , in addition to the regular frequency of publication, this is used to designate issues that are mostly dedicated to a common topic ( themed issues ) and are sometimes edited by guest editors .

for the individual title of a book series

for the individual volume of a periodical published in book form

In multi-volume editions, the individual volumes are often given a consecutive number. When citing a text passage from a multi-volume work, the volume number must always be included with the source .

Comprehensive reference works or subject-specific manuals, for example, can appear in the first edition with all volumes at once; however, it is also possible for the individual volumes to appear successively at certain time intervals. In the case of a new edition of multi-volume works, it often happens that individual volumes appear new at different times. The case may arise, for example, that a two-volume work is available in a library in the form that the first edition of volume 2 is (still) in addition to the new edition of volume 1.