Example of a mono-hierarchical classification 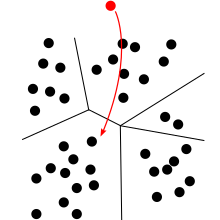 A classification , typification or system (from the Greek adjective συστηματική [τέχνη], systēmatikē [technē] "the systematic [procedure]") is a systematic collection of abstract classes (including concepts , types or categories ) that are used for delimitation and order . The individual classes are usually obtained by means of classification - that is, by classifying objects on the basis of certain matching features . Numerous classifications are structured hierarchically in levels with different differentiations. The set of class names form a controlled vocabulary . The application of a classification to an object by selecting a suitable class from the given classification is called classification or class assignment .

Classifications are used, among other things, in the form of taxonomies or typologies in the various sciences. Examples of systematics are the biological systematics , based on the Systema Naturae by Carl von Linné , the International Classification of Diseases ( ICD ) and various library systems.

The basic cognitive ability to form classes is known as categorical thinking , because human concept formation is already based on class formation for any objects or events of everyday perception.

Although the terms “taxonomy” and “typology” are often used synonymously, there are clear differences between taxonomic and typological classification systems.

Scientific disciplines tend to use the term “taxonomy” (also “natural classification”), which usually stands for a hierarchical system (classes, subclasses, etc.) that

was created. The classic model of taxonomy comes from biology. Therefore, such systems are often (but not necessarily) structured hierarchically and depict homologous evolutionary processes. It is classified according to origin, formation or relationship (genetic classification).

The “typology” (also known as “artificial classification”) is often used predominantly in social science contexts, the

is derived. For typologies (including the outdated racial theories of humans, ideological or psychological type theories , the concept of cultural areas or the currently existing systematics for ethnic religions), a few “typical” characteristics are used that constitute a class. The decisive factor here is often less the actual relationship, but rather a phenotypic or phenomenological classification according to analogous properties, which have a similar appearance but do not necessarily have to be related. In addition, these features are never equally pronounced for all objects of a class, but rather they range from the “ideal type” to weakly pronounced marginal types, so that clear demarcations are usually not possible. In most cases there are also objects whose assignment is controversial or even impossible.

Classifications usually include individual information objects according to a simple document object model with a strictly hierarchical structure. Therefore, neither final nor causal nor temporal chains are recorded.

In principle, two classification structures can be distinguished: In a monohierarchy (also called a strong hierarchy or hierarchy with single inheritance), each class has only one superclass, so that the entire classification has a tree structure . In the case of polyhierarchy (called a weak hierarchy or hierarchy with multiple inheritance), a class can also be subordinated to several superclasses. If the polyhierarchy is more pronounced and there are additional relationships between the classes, it is more likely to be referred to as a thesaurus . In biology, too, one speaks of systematics when assigning species.

If, in the classification of terms, the items falling under term (A) also fall under term (B), then this establishes an order between the two terms (A) and (B). Every object of the subordinate concept (A) is at the same time an object of the superordinate concept (B). One then speaks of an “is-a” or “is-a” relationship between the terms (A) and (B). Example: The term electric motor is a subordinate term of the engine and therefore inherits its properties, for example the fact that it is a machine.

Other classifications can be made, for example, according to the following relationships: “is part of” ( mereology ), “is a member of”, “is created by”. With these classifications there is no inheritance of properties of the objects.

In classification systems, two types of designation can be distinguished for the terms or classes:

The services of classification systems are:

The advantages of classification systems are:

Disadvantages of classification systems are:

Example of the classification of a book

In the Regensburg composite classification there is the class with the notation NU 3025for the history of the Humboldt University of Berlin . The associated classification is as follows:

Most classifications are strictly mono-hierarchical , that is, a class can only have one superclass. To clarify the meaning of individual classes, comments (so-called scope notes ) and references between related classes are used. In most systems, objects can also be assigned to several classes.

The book fellow students from 1933 on the expulsion of students from Berlin's Humboldt University is also assigned to the classes AL 50712(History of higher education and university systems at Humboldt University) and NU 7100(Other history of students as part of the history of science). In other cases, however, a class must suffice as a classification. The signature in libraries, which designates the location of an individual book, must be unique, as it can only be placed in one place. Conversely, however, several books can have the same signature.