Books have a special status as a cultural asset , which is supported by fixed book prices and the reduced VAT rate on books.

Function of the book trade

The widespread book trade mediates books and other products from the publishers, often also so-called “non-books” such as stationery and gift items, to end customers. It transports the goods from the place of manufacture to the place of consumption. Warehousing in the intermediate and retail book trade bridges the time difference between production and the needs of the end consumer.

The book trade bundles the offers of many publishers and the diverse demands of end consumers and establishes contact between manufacturers and buyers, which lowers transport and transaction costs. He provides the infrastructure necessary for the turnover of goods and services such as the assessment and selection of offers from the publishers as well as advising end customers in the retail book trade. Conversely, it provides suppliers from the publishing and intermediate book trade with information about customer needs and sales figures.

The retail book trade ultimately ensures the establishment of a monetary trade with receivables . In contrast to most other retail sectors, the price-setting function in the German book trade is limited to the producers of the goods - the publishers - due to fixed book prices. Exceptions to this are the second-hand bookshop and the modern second-hand bookshop .

The manufacturing book trade includes all businesses that produce and finance books , sheet music , pictures, maps , etc. A distinction is made between general publishers who cover a wide range of topics with their products and specialist publishers who specialize in one or more subject areas.

With progressive group formation , many publishers are now Imprints , d. This means that they belong to a publishing group and publish under their traditional name, but often no longer operate independently.

The publisher owns the rights to produce and distribute the book titles it publishes. When a manuscript is accepted, a contract is concluded with the author , in which he, as the author, transfers the rights of reproduction, distribution and use to the publisher for an agreed fee. In return, he undertakes to print, distribute and advertise. When the book is produced, the publisher determines the book title. It also determines the external design such as typography , cover and dust jacket in the publishing house production and sets the fixed retail price within the framework of the statutory fixed book prices and, if necessary, the equipment of reading copies for advertising a title to reviewers and booksellers. All booksellers and other resellers in Germany are obliged to comply with this.

Publishing house representatives sell the products of the publishers to the bookstores. Nowadays, however, orders are placed less often via them than via direct data exchange. Representatives / representatives process inquiries regarding returns and inform the bookstores about new items and current titles, in short "Novi" (tät), from the publisher's range. You present the spring program from January to Easter (end of the sales representatives' trip); Autumn novelties (travel June to October / November), for Novi to the Frankfurt Book Fair in October. Publishing representatives can be employed travelers of a publishing house or self-employed commercial agents of one or more non-competing publishers. Since only a few book companies can afford systematic market research , the representatives provide information at an early stage, for example, about products from competitors and help to formulate book titles in a common way.

Permanent representatives also take care of administrative tasks that are part of the delivery of the publishing house , such as management of returns. By installing a key account management , the importance of the profession in the division is declining.

Bar assortments supply the book (retail) dealers who are contractually bound to them for their own account and in their own name. They receive a wholesale discount from the publishers and sell to the booksellers at the usual book trade discount , thus achieving their profit margin .

Publishing house deliveries are service companies that take on storage, order acceptance and shipping for publishers. In contrast to the bar range , they usually act on behalf of, in the name of and for the account of the publisher, so they do not bear their own sales risk.

Although there has been a strong tendency towards concentration in the book trade for years , there is a landscape of over 4,000 small and medium-sized bookstores offering either general or specialized ranges . The large bookstore chains obtain maximum discounts from the publishers for purchase and can also streamline their administrative tasks considerably . However, since there is no competition over price due to the fixed book prices , there are opportunities for the smaller product ranges to improve the margin by optimizing the operating processes. If many small bookshops confront publishers and service providers together, better conditions can often be negotiated than would be possible for individual small bookshops.

Bookstores (shops) that sell to end customers and advise them, as well as book departments in general department stores ( department store bookstores) are referred to as retail bookstores. The bookseller "sorts" his individual selection from all available works, in terms of content (e.g. art bookshops, specialist bookshops) or quantitatively (large or small shop space available). The retailer (i.e. retail bookseller) purchases its goods directly from the publisher or from the book wholesaler, usually from both. When buying, he receives the so-called bookseller discount, which is deducted from the fixed retail price. The distributor buys from its suppliers generally "solid" one, without or under certain conditions, with right of return ( remission / unsold copies , which is subject to certain terms). In the scientific assortment, specialist literature is often also supplied “on commission ” or “conditionally”, according to strict agreements with the supplying publisher.

The main features of the retail book trade are the three "B" s:

The range of products is the main characteristic of the general range book trade, which, depending on the size of the company, has 10,000 to 120,000 titles in stock in Germany, mainly in the areas of fiction , non-fiction and children's books, and increasingly also in the areas of paperback and modern second-hand bookshops . Specialist bookshops are more characterized by the depth of their assortment . This means that almost all available literature on a certain (mostly scientific) focus area is kept in stock.

Gräfe und Unzer in Königsberg was the largest retail bookseller in Europe.

Mail order bookstores are usually bookstores without their own shop. Brochures, advertisements in the (trade) press and direct mailing of inventory catalogs to customers advertise the range of products available. He receives the ordered books by post.

The Federal Association of German Mail Order Booksellers represents the interests of the branch . It was founded in Leipzig in 1901 and is based in Wiesbaden . According to the association, the share of the mail order book trade in total book trade turnover in the Federal Republic of Germany is around 12 percent. The Börsenverein des Deutschen Buchhandels states the share for 2009 as 15.5 percent (1.5 billion euros), with 12.2 percent attributable to online bookshops.

In 2006, online orders outweighed catalog orders for the first time.

Total sales in the mail order book trade rose in 2008 by 2.3 percent to 1.493 billion euros. The growth was at the expense of the classic, catalog and field service-supported business. While online sales rose by eight percent in 2008, the traditional mail order book trade (excluding book clubs) fell by three percent to EUR 475 million (2007: EUR 489 million). The book clubs lost four percent in sales and only came to 244 million euros. According to the federal association, the larger market players such as Weltbild and Amazon.de benefit from the strong online sales.

The travel book trade has historically emerged from the colport diary trade and is often organizationally linked to the mail order book trade. Mostly high-priced titles, extensive dictionaries, encyclopedias and specialist books are sold to selected people and companies by an agent using travel samples. The representative receives a commission on the works sold; The travel bookstore takes care of delivery and collection . Due to the special costs, the travel book trade receives an increased discount from the publisher. The travel book trade is increasingly losing economic importance today. 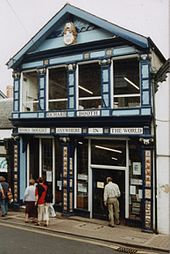 An antiquarian bookshop is a shop specializing in old and used books. In addition to books, it offers other old print products.

In the modern antiquarian bookshop, particularly inexpensive books are traded for which the fixed book price has been lifted (e.g. returned copies or defective copies).

The station bookshop is specially geared to the needs of travelers and is located in a train station or airport . 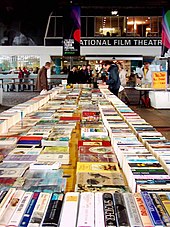 Book sales in London outside the BFI Southbank

A book club is a distribution system for books that are sold exclusively or at preferential prices to members of the book club.

Book sales outlets are sales outlets such as stationery stores, supermarkets and specialty shops that only offer books in the sub-range. The purchase of goods is usually done using the rack jobbing process, which means that external suppliers (publishers, intermediate booksellers ) organize the stocking of the sales area. The department store book trade is a special form of book sales point .

The International Booksellers Association IBF / IBV for the exchange of knowledge and experience consists of 35 countries or national associations.

Book retailing company with the highest turnover in German-speaking countries

The 15 largest book retailers in German-speaking countries according to their sales in 2008:

The five largest book retailers in German-speaking countries according to their turnover in 2012: