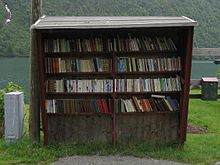 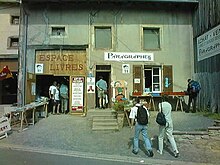 Book or book villages are places with a particularly high number of second-hand bookshops , for which they are usually well known. Often these are places with little economic prospects that have discovered a special initiative for economic development in the book . With the wide range of several second-hand bookshops, potential buyers should be attracted to the village who would not come because of a few shops. This creates additional jobs for the population. The aim is also that other local providers, especially the hospitality industry , benefit from visitors to the antiquarian bookshop.

The world's first book village is remote in Wales . Richard Booth opened a second-hand bookshop in the village of Hay-on-Wye in 1961 using the contents of a container full of books brought from New York . Today the town, which has less than two thousand inhabitants, has 25 second-hand bookshops. Many of them specialize in individual topics. The place attracts a lot of tourists. The tourism is further promoted through book events.

In accordance with Hay's concept, further book villages have subsequently emerged in Europe and occasionally on other continents. The book villages are organized in the IOB, the International Organization of Book Towns.

The first book village in Germany and the German-speaking area was founded in September 1997 . Mühlbeck and the neighboring town of Friedersdorf in the Anhalt-Bitterfeld district now have around nine bookshops with less than three thousand inhabitants. The cornerstone was formed by 70,000 books that were collected across Germany. Today there are around a million books on offer.