from Wikipedia, the free encyclopedia
This is the spotted version , flagged on June 9, 2020 . There is 1 pending change that has yet to be viewed.

The title of this article is ambiguous. Further meanings are listed under Container (disambiguation) .

A container (English:  [ ˌkɔnˈtɛɪnɘr ] ; German:  [ ˌkonˈteːnɐ ] ; from Latin continere for “ hold together”, “contain”) mostly denotes large-capacity containers for the storage and transport of goods . The freight containers come in a wide variety of sizes and are usually standardized and / or standardized in order to simplify transport and planning.

Wooden outer packaging boxes were used in England as early as the 18th century. These forerunners of today's containers allowed goods to be transferred more quickly from rail to horse transport. In the 19th century, there were early container forms in various countries that were used to transport freight by rail. 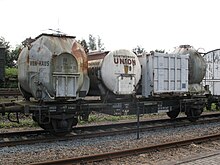 In the 20th century, for example, the Laadkist RTM 903 can be found in Holland as a railway container. In the 1920s, the Railway Clearing House (RCH) in Great Britain set some kind of standard for the railway containers so that they could be better used between the various railway companies. These RCH containers were either 5 or 10 feet (′) long.

At the end of the 1940s, the railways in Germany used the porteur aménagé containers ( pa containers for short ) developed in the Netherlands , which held up to 11 cubic meters of cargo. At the same time, the Swiss Feldschlösschen brewery patented rail transport containers for its beer bottles, the Swiss Containercars .

In 1956, the American Malcom McLean was the first to ship 58 containers on the Ideal X from Newark to Houston ; In 1961 the International Organization for Standardization (ISO) established internationally valid dimensions for ISO containers for the first time. 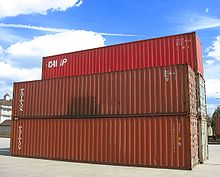 The freight or ship container was introduced in 1956 by the shipowner Malcolm McLean on the US east coast for freight transport . At first it was disparagingly referred to as the “box ship”, but soon prevailed - against strong resistance from the port workers, who feared for their jobs and fought for better tariffs.

Two thirds of all cross-border goods traffic are now carried out with container ships . The freight containers became the basis of the globalization of the economy; with them u. a. most of the trade in goods is carried out with finished products . Due to their standardized shape, the containers can be transported by a wide variety of means of transport ( ocean-going vessels , inland waterway vessels , railways and trucks ) and quickly handled without the cargo itself having to be handled ( intermodal transport ).

The largest fully automated container port has been Hamburg- Altenwerder for several years .

Around 27.5 million TEU standard containers (20 ′, 40 ′ or 40 ′ high cube) were in circulation worldwide in mid-2010 . The average lifespan of a standard steel container is 12 to 13 years. Lately these containers have mainly been manufactured in China, most recently almost 3 million TEU annually. After the consequences of the financial crisis significantly reduced freight volumes, this production almost came to a standstill. There is still a demand for special containers such as reefer containers.

Containers are also used in particular for waste disposal as a collection and transport unit for waste . These are especially suitable for a larger amount of waste that exceeds the capacity and the permitted type of waste in garbage cans . In particular, other types of waste, such as building rubble or mixed construction waste, bulky waste , steel scrap or garden waste, can also be disposed of here.

There are different types of containers that can vary in height and length with the same filling quantity and are used depending on the circumstances and loading options. Drop-off containers are attached to holding chains by the container vehicle and set down or raised horizontally by two lifting arms.

Containers that are parked and pulled up with skip trucks, mostly with chains. The mostly asymmetrically designed containers are preferably found with a capacity of 7 m³.

Roll-off containers have rollers and are picked up and pulled up or set down by a hydraulic lifting arm with hooks.

Due to the high capacity (from a volume of at least 1 m³) these waste bins are considered to be containers.

For containers of this size in Germany, an installation permit must be applied for from the city or municipality. This application can be made using a form or informally. The fees vary depending on the type of use, but amount to at least 35 euros. Used clothing collections on public property are generally not permitted; a special responsibility also applies to green spaces.

Other types of containers

Containers are also used as a module for constructing container buildings . They can be adapted and pre-set up for a wide range of uses, for example as a living container , office container , toilet container or school container . To do this, they are usually insulated, provided with doors and windows and equipped on the inside. So they can serve as a lounge for people.