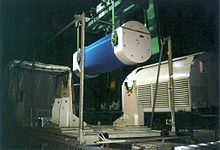 Castors are special containers for the storage and transport of highly radioactive materials , for example spent fuel elements from nuclear power plants or waste products (" glass canisters ") from reprocessing .

In general German usage, “Castor” is also used as a synonym or generic name for fuel element containers or containers for highly radioactive waste .

The transport and storage container has a gross total mass of 110 to 125 tons. It essentially consists of a thick-walled, cylindrical container body made of nodular cast iron with the standard designation GJS-400-15C or forged steel for the lifting pins and a double-lid sealing system. The sealing lids are screwed to the container body and equipped with long-term resistant metal seals. On the outer surface there are axial or radial cooling fins for passive heat dissipation of the decay heat . For transport, shock absorbers are attached to the base and cover to reduce any possible accident-related shock loads . A castor costs around 1.5 million euros.

In accordance with the interim storage permits, the containers are approved to hold a maximum of 180 kg of radioactive substances with an activity inventory of a maximum of 1.2 · 10 18  Bq . The Castor V / 19 (PWR) and Castor V / 52 (BWR) casks are allowed to hold a radioactive inventory up to a maximum decay power of 39 kW. Inside, the temperature of the fuel rod cladding remains below 370 ° C. The moderator material in the Castor wall is designed up to a temperature of 160 ° C; the hall floor on which the castors stand must be designed up to 120 ° C and the hall walls up to 80 ° C. The exhaust air temperature above the castors is assumed to be 55 ° C.

Highly radioactive glass canisters from reprocessing that have already been returned have so far been transported and stored in CASTOR HAW 20/28 CG containers. These are about 6 m long, have a diameter of around 2.50 m and a 45 cm thick wall. Loaded containers can have a mass of up to 117 tons.

In 2008, TN 85 containers were used to transport the glass canisters from reprocessing in France . In 2010, containers of the new CASTOR HAW28M type were used for the first time. These containers can dissipate a heat output of 56 kW.

For further storage, it is planned (as of 2003) to open the containers again and to move the waste to Pollux containers.

The on-site interim storage facilities contain in their permits for these containers a maximum permitted surface dose rate of 0.35 mSv / h, of which a maximum of 0.25 mSv / h may be caused by neutron radiation (i.e. staying for one hour directly next to the container results in a dose 0.35 mSv, which corresponds to around a seventh of the normal annual radiation exposure of the population of 2.5 mSv).

The safety and suitability of Castor and other storage and transport containers for radioactive material is also regularly discussed at the international PATRAM symposium .

The transport and storage containers are also approved by the BfE. The BfS commissions the Federal Institute for Materials Research and Testing (BAM) as an expert . As part of the approval process, the manufacturers must provide test results and evidence.

The transport of heat-generating waste (e.g. glass canisters) must be applied for and approved by the BfE.

Castor containers are so-called type B packaging and also meet the acceptance requirements of the central and decentralized transport container warehouse in Germany. For type B packaging, a type approval is required in accordance with traffic law, for which the Federal Office for Nuclear Disposal Safety (BfE) is responsible in Germany .

Type B packaging must withstand all mechanical and thermal loads that occur during normal transport and in the event of serious transport accidents. Your safety functions must not be significantly impaired even in the event of a serious accident, so that no radioactive substances from the packaging can get into the environment. The Federal Institute for Materials Research and Testing (BAM) tests the mechanical and thermal properties of the packages as an expert on behalf of the BfS. As part of the approval process, the manufacturers must provide test results and evidence.

In Germany, the requirements for castor containers correspond to the recommendations of the International Atomic Energy Agency (IAEA). According to this, containers would have to withstand the following accident scenarios:

Mathematical evidence or the test of a (true-to-scale) model is sufficient for proof . The first three accident scenarios could be carried out one after the other on the same model. The container does not have to remain completely undamaged, but the shielding effect of the container may deteriorate by a maximum of a factor of 100 (to 10 mSv / h ( millisievert per hour at a distance of 1 m)). Falling from a height of 9 m means that the speed of the containers when they hit the surface is around 48 km / h.

In addition to the prescribed tests, others are carried out. For example:

The manufacturer states that these tests did not impair the safety functions and that they remained pressure-tight.

Critics doubt the informative value of the experiments, test series and extrapolations for the safety of the various Castor containers or corresponding containers. Empty containers were used for previous tests, so they were a little lighter than in the use case. In the meantime, reproduced inventories are used in drop tests, the dimensions and mechanical properties of which correspond to the original inventory. Many experiments were carried out with reduced models on a scale of 1: 2, the statics of which correspond approximately to the originals. Critics compare this to crash testing cars where nobody would rely on miniature tests .

After all, for a long time, various tests were completely dispensed with and only theoretical calculations were used instead. After independent observers identified miscalculations in the assessment of the fall on a concrete floor in July 2002, new calculations were made that were kept under lock and key until December 2005.

Approval is only requested for newly developed containers. For variations of containers that have been tested once, no new approval procedures are carried out as standard, for example if a different insert basket is used or a completely different shock absorber (end cap) is used.

In addition to this general skepticism, there is also specific criticism of the prescribed test procedure.

Transport of Castor containers to and in Germany

Most of the Castor containers are transported as freight trains . Road transport is usually carried out where there are no rail systems, for example in the last few kilometers between the loading crane near Dannenberg (Elbe) and the Gorleben transport container storage facility . In Germany, due to the nuclear phase-out, transports of the spent fuel elements from the nuclear power plants to the reprocessing plants were stopped on June 30, 2005; Instead, the Castor casks serve as interim storage facilities, which are often located at the respective power plant locations. In the reprocessing plant at La Hague nuclear fuel from German nuclear power plants located were transported to the Gorleben interim storage facility until November 2011th The fuel elements from the Sellafield WAA are to follow in the years 2014 to 2017. In Germany, there is great resistance in parts of the population to the transport of highly radioactive waste. The biggest protests regularly cause the radioactive waste to be transported back from the La Hague reprocessing plant in France to the Gorleben interim storage facility . At demonstrations and sit-ins regularly participate several thousand people . On site in the Lüchow-Dannenberg district there is a strong tradition of protest with a well-developed infrastructure . There are also regular protests and blockades along the transport route in Germany.

The criticism of the opponents is not generally directed against the return of German nuclear waste to Germany. This also shows the participation of French environmental activists in the blockades along the transport route and in Wendland . The protests are generally directed against the continued production of further nuclear waste in the current nuclear power plants and especially against the Gorleben repository site , which is viewed as unsuitable and dangerous. Not only the local population fears that the transports to the Gorleben transport cask storage facility will consolidate the political decision in favor of the repository. In contrast, decentralized interim storage facilities at the power plant locations shorten the transports to the interim storage facility and are not a preliminary decision for a specific repository location.

2011, the German government decided after the Fukushima nuclear disaster a nuclear phase-out . Eight of the 17 German nuclear reactors were shut down immediately, the remaining plants were phased out by 2022 at the latest. The operators of the nuclear power plants can start dismantling at the earliest when the fuel rods have been removed from the reactors and stored in castors. In order to be able to meet the increased demand for containers due to the nuclear phase-out, the manufacturing company GNS has increased its production capacity. The containers have had the necessary updated approvals since 2010 (CASTOR V / 19) and 2014 (CASTOR V / 52).

Similar containers from other manufacturers

The containers of other types listed here by the manufacturers "Excellox" (Great Britain) and "TN" (a trademark of Cogema Logistics , France) are listed here for the sake of completeness. The same basic principles apply to them. The term Castor is a synonym for all containers for the transport of radioactive substances (see also generic name ).