A crash test [ ˈkræʃ- ] is a collision test of vehicles under realistic controlled conditions. Such tests are particularly common in the automotive industry when developing vehicles and security systems. They are used to gain knowledge about the behavior of a vehicle, its occupants or the load in different crash configurations. The result is either the confirmation of the desired vehicle safety or the detection of weak points that still need to be fixed.

For the national type approval of vehicles in Germany , especially for the general type approval (ABG), the proof of the existence of a quality assurance system is mandatory on the part of the manufacturer. The associated implementation of quality assurance indirectly includes the implementation of crash tests by the manufacturer. Since vehicle manufacturers are generally striving to open up larger markets for their vehicles, a large number of other regulations are usually added to the local legal provisions, such as the recommendations of the United Nations Economic Commission for Europe (UNECE), Transport Division , which reflected in EU directives (see ECE-R ), and other institutions. In the USA there are different type approval regulations and a separate set of rules for vehicle safety (see FMVSS et al.), Which differs from other parts of the world (especially Europe), so that local manufacturers usually have their models undergo separate crash tests in the USA if they intend to to market them there.

In the crash test, a vehicle is driven against a fixed, rigid or deformable obstacle under defined conditions; there is also the option of driving vehicle-to-vehicle crashes or simulating collisions with pedestrians. The effects are recorded by numerous sensors and by recordings with high-speed cameras. 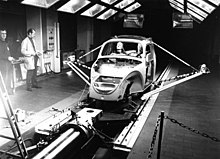 The crash test usually takes place in a special test facility. The vehicle is accelerated by a tow rope to the required speed depending on the attempt and hits the obstacle at the end of the route. Crash tests with the entire vehicle are already carried out in the prototype phase. They primarily serve to secure the structure of the vehicle.

In so-called sled tests, the most common type of crash tests carried out, only a (usually reinforced) body shell with the components to be tested is mounted on a sled . Depending on the type of system, the slide is decelerated in a defined manner at the end of a run-up section or accelerated in a defined manner from a standing start. The sled and body are not damaged in the attempt and can be reused.

In the case of side impact attempts, the otherwise stationary obstacle (e.g. deformable barrier) can be attached to a rollable trolley and accelerated against the stationary vehicle.

With the help of lane guidance systems such. For example, the CCV system , crash tests can also be carried out outside of fixed test facilities at any location. Such systems are e.g. B. from DEKRA , and were used by DaimlerChrysler . The vehicles are driven by their own engine power. Possible test types are e.g. B. Block impact (e.g. Euro NCAP , US NCAP , FMVSS ), impact against an obstacle (e.g. tree), crash barriers, vehicle-vehicle crash. 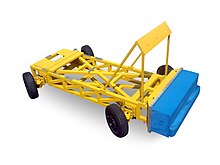 Mobile crash barrier for tests according to FMVSS 214 - Ernst Prüfmaschinen

Depending on the test setup, a wide variety of crash situations can be achieved (e.g. impact on a tree, collision with other vehicles from the front, from the side or from the rear and with different overlap). In addition to standardized crash configurations, real traffic accidents are also simulated. The data from an accident or from expert or witness statements serve as the basis for the configuration. Such tests are often commissioned for forensic expert reports to recreate an accident situation. A crash test almost always leads to the destruction of the vehicle being examined - often even with expensive prototypes . If possible, these tests are therefore replaced by computer simulations (see finite element method ). Sometimes complete vehicles are not used, but only relevant sub-areas.

The first crash test in Germany was carried out by Mercedes-Benz on September 10, 1959 .

A manufacturer-independent crash test program widely used in Europe is Euro NCAP . The abbreviation stands for "European New Car Assessment Program" and until the end of 2008 consisted of the following three parts:

The Euro NCAP has been expanded since 2009 ; since then it has comprised the four areas

These tests only apply to passenger cars. Euro NCAP has also been testing four-wheeled light vehicles since 2014 , but both the number of tests and the requirements have been reduced.

Systematic crash tests were carried out for rail vehicles as part of the “Safetrain” project, and video documentation is also available.