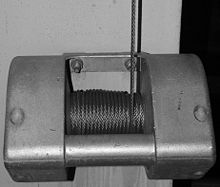 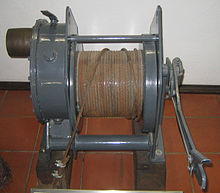 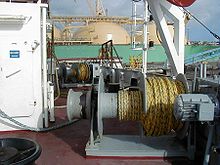 A winch is a device that can be used to pull something with the help of a rope . The rope is pulled by muscle power , later by a motor by z. B. is wound on a rotating cylindrical drum ( winch ).

The winch ropes can be made of natural fibers ; steel ropes are usually used for heavy loads and, more recently, plastic or synthetic fiber ropes, e.g. made of long-chain, textured polyethylene (PE-UHMW). The pulling force can be increased by using a pulley .

The oldest winches appear to have been attached to deep wells that were originally designed as draw wells . While animals (oxen, donkeys) were also used to pull the well rope in older wells, the newer space-saving technique of pulling with a winch could only be operated by human hands. On the other hand, a blocking mechanism could be built in that prevented the filled bucket from falling down - triggered by accidental release. Later, winches with or without side treadles were also used in cranes or military machines (e.g. catapults or ballistae ).

A drum is driven mechanically, electrically or hydraulically and the rope is rolled up on it. The rope can lay itself if the free stretch of the rope in front of the drum is long enough. Otherwise, an additional rope guide can be used to lay the rope layer by layer by moving it sideways.

With the drum winch, the entire pulling force is transmitted to the rope via the drum. The tensile force decreases with the number of layers on the drum, as it depends on the drive torque and the lever arm (radius on the drum).

The bobbin uses a narrow drum on which a tape or flat rope is not wound next to each other, but only on top of each other. It is used at low conveying heights and has the advantage that the rope does not run out / in and cannot be damaged during laying.

Winches in which the rope is looped around a rope capstan and only then wound onto a reel are called capstan winches or traction sheave winches . In shipbuilding, this form of winch is also known as a winch . The reel only exerts a pre-tension so that the rope has the necessary friction on the capstan head - the actual pulling force is applied by the capstan. These winches have the same pulling force and rope speed over the entire length of the rope. They have a larger space requirement and are built much more complex.

Rescue of a car using a mechanical pulling device

The type of application determines the size and the more precise construction of a cable winch.

Winches can either be attached to the rear or the front of the vehicle. In the case of winches on the rear side with a cable outlet in the direction of travel, the load on the chassis is more favorable, since the frame is subjected to pressure and not to tension as with front winches.

In the case of rear winches, the rope is either freely guided in the vehicle frame or through pipes and pulleys. At the front of the vehicle there is either a so-called cable window with four rollers that guide the cable or a so-called propeller roller (two pulleys that can turn 360 degrees). Nevertheless, the pulling angle must not deviate more than 15 degrees to the left or right of the vehicle axis, otherwise damage to the chassis can occur and the pulling force is reduced. Some winches are then automatically switched down using a switch and the pulling force is reduced.

In order to be able to pull out the rope faster when the winch is not under load, the winches usually have a free wheel or overdrive. The drum is separated from the drive by a clutch and can turn freely.

With mechanical winches, the rope speed is controlled by the motor speed, with hydraulic winches via a control valve. Electric winches usually have no controllable speed.

In order to avoid excessive stress on the winch and rope, pressure relief valves are installed in hydraulic drives or shear bolts are installed as predetermined breaking points in mechanical winches. With modern winches, the pulled load is shown as a percentage on the control display.

In the fire brigade, winches that are permanently installed in the vehicle are referred to as machine pulling devices according to DIN 14 584. In addition to the actual cable winch, the mechanical pulling device also includes all components that are required for the safe operation of the cable winch, such as a four-wheel parking brake. The use of the mechanical towing device is regulated in Germany in the fire service regulation 1 , which also includes regulations of the UVV .

The usual pulling force of a machine pulling device is 50 kN (for example RW 1 and LF 24 , or RF or RLF), and it has a pulling length of 50 to 60 m. It must be taken into account that several turns of the rope must remain on the drum so that the tensile force is transmitted to the drum through friction and not just via the rope socket.

For technical reasons, the winch movements are usually controlled from the driver's seat. However, there are also remote controls with which the machinist can move away from the vehicle and operate the control of the cable winch.

Safety is also the top priority when operating cable winches. Therefore, the fire brigade members are not allowed to stay in the area of ​​the rope (1.5 times the rope length as a safety distance) when the winch is under tension. The rope must be checked and maintained regularly. If the strands are broken or the rope kinks, the rope is replaced.

In order for a vehicle to be able to utilize the winch power, the vehicle itself must be well anchored. This can happen in a number of ways. The easiest way is to put wheel chocks under the wheels. An all-wheel brake can also be used or the vehicle is anchored to a strong tree, for example, taking into account the tensile forces that the vehicle frame has to transmit.

Use of a cable winch for mountain rescue from the air.

Winch on a police helicopter

The tactics can vary; a rescue belt, a stretcher or a rescue cage can be attached to the winch . The winches on helicopters are often named after the English term winch .

For cable winches used commercially, an annual U-VV safety check (according to the guidelines of the employers' liability insurance association ) in connection with the VDE regulations (for electric cable winches ) is required.