An anchor winch (seem .: anchor winch) is a device for hoisting, i.e. lifting the ship's anchor . 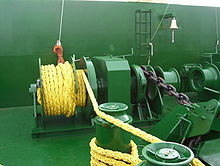 Modern windlass. On the far left the storage part of the mooring line (yellow), next to it the working part. In the middle the drive, then the chain sprocket with anchor chain, on the far right the so-called capstan head.

The mooring cable (wire, poly line, atlas line) for mooring the ship and for mooring (moving the ship on the pier) is wound on the mooring and mooring drum . The mooring winches have a working and a storage part. The hawser lies on the storage part and is output from it. Only when the hawser is tight when it is being hoisted is the working part wound up. This prevents the mooring lines from getting confused when they are exposed to particularly strong drafts in port operations. The crew members must ensure, especially in the case of wire, that it is rolled up neatly next to one another.

When the ship is moored, an automatic mooring device ensures that the mooring line (manila or plastic) is always tensioned. This facility is important in ports with changing water levels.

To relieve the anchor winch, the chain can be held by a chain stopper when anchoring . The use of a chain stopper is absolutely necessary if the band brake is not able to hold the load caused by the anchoring process (80% of the chain breaking load). The retrieved anchor is pulled firmly into the anchor pocket by means of a lashing device in order to prevent the anchor from hitting the hull of the ship during the journey.

In the days of sailing ships, anchor winches were driven by hand via a capstan , later by small, mostly two-cylinder steam engines, and today they were driven electrically or hydraulically. Many smaller ships and yachts now also have an electric windlass. This is typically attached just behind the bow - anchor and chain are deployed over the bow. It is also rare to find yachts with fixed anchor gear at the stern, this variant with stern anchor is most likely to be found in Scandinavia. More often, however, the second anchor has to be deployed by hand or with the dinghy if necessary .

In Christianity , the winch was associated with Saint Erasmus ( Elmo ), whose symbol it is.