This article deals with the back in shipping; for further meanings see Back (disambiguation) .

Back of a smaller ship 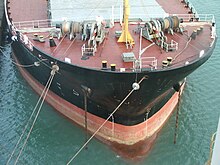 Back of a bulk carrier

Back is a very old word that occurs in many dialects and, independently or in numerous combinations, belongs to the international vocabulary of seafarers . The many different word contents all have a common root - the " back ", the "arch" or "turned backwards".

Today, a baking in seamanlike using either a structure on the foredeck, which extends from side to side to the stem and is bounded above by the forecastle deck, or a table in a chamber in a housing cover or a fair .

In Middle High German (ARS) was jaw back or buttock; in Middle Dutch it stood for bak and in Low German bak or back . In English it is still a colloquial language today, and in American English one says back o 'town when - in the negative - one wants to mark the unsightly downside of a city.

An extremely fat woman was marked with: dat is bi ehr all Buk un Back - everything about her is belly and bottom. Under bakwaschen was understood, a "wash exemplary" Maul have other much talk behind his back: He bakwaschet daarmit around - "He carries it from one to another."

The old backbeest - “backbiest” - was a hearty swear word for women a good two hundred years ago who were believed to be only suitable for carrying loads .

Back has been in use in the language of seafarers for over a thousand years. The oldest combination of words is probably port , which means the left sea side of a ship facing ahead. In the time of the Vikings it was adopted into the sailor's language, as their boats had a steering device that was located on the right board, the starboard , and when operated the helmsman on the left side of the ship turned his back to.

This control device, an approximately four meter long belt with the function of a rudder , which was articulated to the ship's side, was used on German ships until the 13th century.

When oars arranged amidships came into use, which were operated by means of a tiller , it was customary until the 18th century to relate the oar commands not to the oar, but to its tiller. Rudder port! So meant at that time to put the tiller to port, whereupon the ship turns to starboard.

The  words port and steorbord have been handed down from the time of the Anglo-Saxon King Alfred the Great - around the year 900 - and in French the word was adopted by the Normans as babord .

However, the forecastle probably got its name because the shipbuilders, on the advice of the seafarers, provided the deck beams and thus also the laid deck, which limits the superstructure, with a vault, a beam bay, in order to allow the water to drain off quickly. The deck was thus given the shape of a back.

In this back lay on the old sailing ships, the living quarters of the sailors - they were the front of the mast  - and managed - ate - they also. One can only guess whether the regular visit to the Back to create was the cause, in any case one table was also given the name Back .

Before every voyage, the crew on sailing ships was divided into backships , sometimes just backsheads . They usually consisted of six to ten seafarers who worked on a specific pier during the entire voyage.

Coming from the Dutch Baksvolk , this table community was called Packs-Volck in the 17th century, in the 18th century Backsvolk , Backsgesellschaft or baking cooperative . Around 1900, all designations ended up in the abbreviated version Backschaft and always identified a certain group of seafarers.

According to the Dutch baksmeester , a bakery master or baking elder was in charge of each baking shaft . The members of a backers were called Backsgesellen or Backsmathe , later also baking colleagues ; A bakery boy belonged to each bakery, whose duty it was to fetch food for his bakery, to bake it up - “to put it on” - as well as to “clear up” the baking after the meal and to clean the cheeks. In later times the service of the baker boy in the team logis was alternately performed by the baking colleagues, the word baking shank was transferred to the table service itself, and the person who had to perform it was called the baking shank . Strict morals sometimes prevailed: “If someone curses in the bakery or makes dirty talk, bakery justice is exercised on him; That means: He is thrown several grains of salt , which serves as a sign that he has fallen into punishment. With this in mind, there is always a bowl of salt on the back. "

Back as a wooden dining bowl is said to have got its name from the Latin bacca - water barrel.

Finally, it should be noted that the watertight boxes on the inside of the outer skin below the anchoring ducts, in which water was caught and channeled outboard through scuppers, are called piss cheeks . Pißback was also called an abortion , and at the time when the Galion was no longer used for this purpose, “stünn vörn ünner de Back dat Schitemmer”.

Holding a sail back

If a sail back kept or made, it is placed against the wind and thus is on the windward side of the boat or ship . A bow hold of the sail can be used when casting to move the ship backwards or to turn into the wind. During a tack , the foresail is briefly left back to support the initiated turning movement. The headsail is also back when twisting and laying .

Wiktionary: Back  - explanations of meanings, origins of words, synonyms, translations