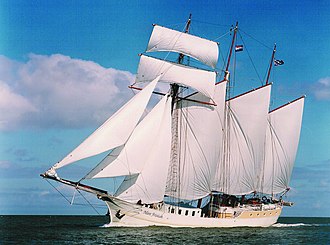 Sailing ships have at least one mast and one sail and, as a counterpart in the water, have a deep keel , a keel fin, a sword or several side swords , in particular two in flat-bottomed ships . There are two types of sails: 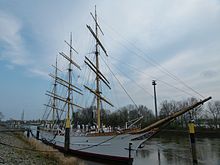 A sailing boat (on the cross ) like an airplane wing (cf. sailing and aerodynamics ) receives propulsion from the resulting balance of forces, which results from the wind force on the sails and the force on the sword or keel fin. In this way a sailing ship can go against the wind at an acute angle. When a sailing ship moves in the direction of the wind (before the wind), the wind pushes the ship by pushing into the sail. In the event of a lull and for maneuvering, sailing ships nowadays usually have a motor (" lull pusher ").

Experiments were also carried out with Flettner rotors , machine-driven, vertically rotating cylinders with the help of which wind energy is used for propulsion of the ship due to the Magnus effect . Although these ships use the wind to move, Flettner rotors are not sails.

→ Main article : History of the development of the sailing ship

Historical development of the sailing ship 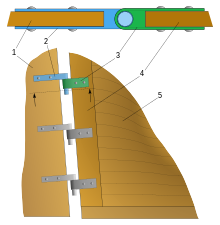 Stern rudder of European sailing ships in the age of discovery

The development of sailing ships probably began in Egypt . Sailboats are the first major means of transportation in the water. Ships with a mast and a large square sail were used primarily for voyages on the Nile , but also for voyages across the Mediterranean and the Red Sea . The sail was already pivoted so that the ships could sail even in sideways wind.

The Phoenicians and Greeks developed from around 1000 BC Two basic types of seaworthy sailing ships:

Long journeys have already been made, especially with the cargo ships. The Carthaginian Hanno sailed around 600 BC. Along the west coast of Africa to the equator. The Greek Pytheas from Massilia , today's Marseille , sailed around the British Isles and probably also came to Heligoland . The Romans took up these types of ships and developed them further. The cargo ships received a bowsprit from which a square sail also hung.

In Central and Northern Europe, longships were developed that were initially rowed. The Saxons and Angles , who emigrated as Anglo-Saxons towards the end of the Roman Empire across the North Sea to England, had already sailed the long ships with a mast and a square sail.

The Vikings further developed this type of ship to perfection ( Viking long ship ). According to contemporary reports, the slender Viking ships were faster than a mounted messenger. So the Vikings were able to use the element of surprise in their raids in the early Middle Ages. They have already sailed across the open sea to Iceland , Greenland and North America .

After the end of the Viking Age, the Hanseatic Cog was developed from the wider open merchant ships in the north . It too had only one mast, but it formed the backbone of the long-distance trade of the Hansa . Towards the end of the Middle Ages two- and three-masted ships were also built, for example the Hulk . From them the caravel was developed in Spain and Portugal , with which Christopher Columbus , Ferdinand Magellan and Vasco da Gama undertook their voyages of discovery.

In Southeast Asia, the Balangay boat type has been used since the 4th century . Filipino merchants used it on their trade routes to China, Malacca , Borneo, Ternate and Myanmar until the 16th century.

In China , sailing shipbuilding reached a very high level as early as the Ming Dynasty under Admiral Zheng He . Back then, so-called treasure ships were built in Nanjing, between 59 and 140 meters in length and with up to nine masts. They were used for long-distance trips e.g. B. used in India , Arabia and Africa .

Since the 17th century, increasingly specialized forms have been used, among other things

In merchant shipping, the fast clippers (USA, Great Britain) developed from 1830 and the somewhat plump Down Easter in the New England states from 1855. In the late 19th century, steel windjammers , more than 1500 full ships and barques as well as approx. 440 four-masted ships - approx. 40 four-masted full ships and 400 four-masted barques, the wooden ships. The climax was seven five-masted steel ships, six five-masted barques and one five-masted full-ship, the Prussians . In the United States of America, the construction of giant wooden schooners began around 1900. There were about three hundred Fünfmaster Gaffelschoner, ten six-mast gaff schooner on the New England coast, including a steel six-masted schooner and Wyoming as one of the longest wooden ships, plus several alterations to six mast schooners wooden steamers and four-masted boats on the Pacific coast and a seven-mast gaff schooner, the Thomas W. Lawson from Massachusetts .

The lightweight construction enables ever larger planing boats and higher masts. In hydrofoils , the wings take on the function of the keel and the hulls. 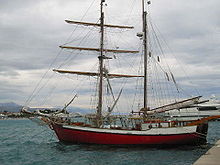 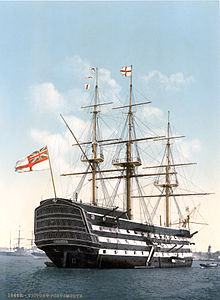 Ship of the line ( HMS Victory ) 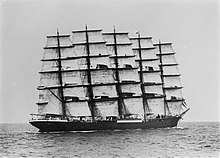