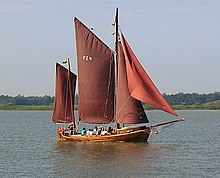 A Zeesenboot , in Low German "Zeesboot" or "Zeeskahn", is a mostly 10 meter long, broad-hulled Haffboot . The name is derived from the harness used , the Zeese . The sailboat is suitable for relatively sheltered, shallow waters. Today Zeesenboats are mainly used as recreational sailboats.

By the end of the 15th century at the latest, Zeeska barges were used as fishing vessels , especially in the Pomeranian Bodden waters and the Szczecin Lagoon . In the Stralsund Chronicle of 1449, Johannes Beckmann speaks of the "Zese barge".

The technical development of the Zeesboat, which emerged from the Western Pomeranian Zeesekahn, was promoted from the second half of the 19th century because many Zeesen fishermen went to sea abroad in their youth and were thus able to familiarize themselves with the sailing technology of other regions.

So the amidships came through Danish influence in a daggerboard held sword after 1880 in use. Before that, a sword was used, which was always driven on the leeward side . The Carvel became common in the second half of the 19th century, previously was geklinkert .

Originally the Zeesenboot were small single-masted boats with a square sail . With the increasing size of the Zeesenboot, at the beginning of the 19th century, the square sail gave way to a lug sail . From around 1870, gaff sails were introduced ( gaff rigging ). At the end of the 19th century, the erection of a second mast had become established, which then again carried a lug sail. The rig of the Zeesen boats thus corresponded to that of the ships that are still sailing today.

In the 19th century and the beginning of the 20th century there were Zeeska boats up to 22 m long on the Szczecin Lagoon , but they fell victim to official regulations in 1908.

Fishing with Zeesen boats continued in the GDR until the end of the 1970s. In some cases, former Zeesboats are still used today as motorized small boats by the lagoon fishermen.

There are many Zeesen boats, especially on the Bodden waters behind the “ Fischland-Darß-Zingst ” peninsula . These ships are lovingly preserved and cared for by their owners. They are used as private sailing boats or for tourist sailing trips.

In 1909 the first regatta was held with 10 Zeesen boats. Today races have been held every year since 1964. The 50th Zeesenbootregatta took place on the Bodstedter Bodden on September 6, 2014 (see photo) after the new port complex in Bodstedt was inaugurated the evening before. 54 Zeesen boats took part in the regatta.

Zeesenboats are predominantly pointed , wide and flat-lying, originally open swordboats in Kraweel or clinker construction made of oak. The stern post is usually straight and massive, the stem is convex. The hull is laid out with a keel , there are 10–13 plank walkways with a thickness of up to 4 cm.

A strong skirting board leads from Steven to Steven. Zeesen had side swords, which were replaced from around 1880 by a man-high, easier to use middle sword. In a Zeese, seven bulkheads divide the hold (from bow to stern): Vörunna, Kabelgatt, Denn, Dörrink, Dekem, Stuerplicht, Acht` Derrink. Until the 19th century, the Zeesboats were built open. Only from around 1860 there was a small cabin at the bow. The water- flushed fish box (Deken) amidships became common and mandatory since 1858.

There are single-masted Zeesenboats. Mostly, however, it is a ketch-rigged two-master or, with a very short mizzen mast, a one-and-a-half master. Zeesen usually have two continuous pole masts that are anchored to the keel pig. The front mast (main mast or fore mast) is in the first third of the boat, the slightly shorter rear one (mizzen or Hinnamast) in the second third of the boat. The masts are supported by a forestay on the jib boom and three wire shrouds on each side. On the mast, the shrouds are attached to the top (the uppermost end of the mast) and fixed (= lashed) to the shrouds (on the outer skin of the ship to fasten the shrouds) to the hull using maimers (three-hole wooden discs, see also picture). While the jib is designed as a staysail , the jib is driven loosely. A treeless gaff mainsail is used on the main mast . Above is the gaff top sail, similar to a lugger sail . The mizzen mast carries a lug sail, known as a bull sail in Zeesen boats. The sails are traditionally brown in color. Every 2 years the cotton cloth was impregnated (“borehole”) with a hot mixture of pine tar, tallow, linseed oil and ocher earth. The sails were framed with ropes and attached to a six to seven meter long yard. The leech (rear edge of the sail) of the main sail was framed with a chain in order to be able to free the stiff cloth more easily at low temperatures. A rack was used to slide the yard up and down the mast - a bow-shaped stick or rope set with wooden balls. Several rows of reefing straps sewn into the sail were used to reduce the sail area in strong winds. From 1900, the gaff sail prevailed on the main mast, while the second mast was driven with a lug sail.

The fishing was done with the sack-like Zeese , which was pulled over the ground by the drift with the sails tightly set and the swords raised. The net had no shear body , but was only stretched between the drift trees (protruding poles) at the stern and the jib boom of the Zeese on the starboard side.

Fishing was mostly done at night without position lights . A drift lasted between one and three hours; The mesh size of the net determined the type of fish ( pike , pikeperch , eel or smelt ). Then the approximate starting position, so to wind and current , crossed back and started the next drift.