Regina Maris schooner with gaff rigging - three gaff sails; the foremost of the three gaff topsail is not set

The gaff rigging is a type of rigging for sailing ships , which probably originated in the 17th century and was largely replaced by the high rigging in the first half of the 20th century .

The term gaff ( nl. / Nds. For fork ) denotes a spar (round timber) that is slidably attached to a mast and protrudes upwards and on which the gaff rigging is clearly recognizable.

The irregular square sail is stretched between the gaff and the tree . Since it is set in the longitudinal direction of the ship, it is one of the Schrat sails . His four Lieken ( "Sail edges") are called luff , leech , leech , Oberliek , the corners Klauohr , neck , clew and Piek . Another name for the leech is Baumliek , for the luff Mastliek . The gaff sail is completely accessible from the ship's deck and can therefore be operated by smaller teams. For setting of the sail, the gaff is with two traps , Piek case and throat halliard , raised parallel to the boom. Only when the claw has reached its end position is the gaff set up with the prick fall.

The gaff claw establishes a connection between the gaff and the mast in such a way that the gaff remains pivotable with respect to the mast and its height and inclination can be changed. The claw was originally made from a strong fork of a branch, later from timber, cast iron or steel . If the claw is manufactured as a separate part, it is also referred to as a gaff shoe. The opposite end of the gaff is called Piek .

A gaff top sail can often be placed above the gaff sail, between the gaff and mast . It is a light sail, which is either cut as a triangular or square top sail . The sail can either be permanently attached to the masthead (the top part of the mast) or it can be driven on the fly . The latter means that no edge of the sail is firmly connected to the rig . In order to be able to cut the sail larger than the extreme tips of the mast and gaff would allow, it can be attached to spars. The spar on the luff is then called the topsail spar or top prah . If a spar is attached to the leech, it is called a foot hoe .

The mast carrying the sail must usually be secured with two backstays to prevent it from tipping forward. Depending on the type of construction, these stays have to be operated as spaced sheets either at each turn or at the latest from courses aft . Because mostly only the tree is fixed in a certain position with pods , while the gaff continues to blow to leeward, the sail twists. This has an influence on the aerodynamic properties of the sail (see also offset ). Blowing out as well as excessive swinging back and forth can be controlled with a Gaffelgeer (or Gaffelgei ) - a rope that leads down from the pike, often to the ship's side - but attaching the same means additional wind resistance in the sail and additional workload for them Crew during the maneuvers .

Development of the gaff rigging

There are three theories about the origin of the gaff sail. One approach says that it originated in Holland in the 17th century as a further development of the Latin rigging . Another theory suggests that it evolved from the spritsail . The dissatisfaction that the sail rests on the spar when the spar is leeward from the sail is said to have led to the spar being raised higher and higher until it was finally in the end position known today. The third assumption sees the origin in the Lugger rigging , the work intensity of which made further development necessary. The usual sails were often so large that they could only be operated by a large crew; Furthermore, the spar had to be brought to the other side of the ship's mast at every turn , which was only possible with a considerable amount of work.

A further development of the gaff rig is the Bermuda or high rig with triangular sails , whose triumphant march in sailing began around 1910. Due to its advantages, it only took 15 years for the high rig to mature into the dominant type of rigging and to largely replace the gaff rigging. But gaff-rigged ships are rarely seen today for other reasons: The commercial shipping branch, which works with much heavier ships and also has significantly different requirements on the material used, was increasingly motorized in this era, so that there (gaff- ) Sails only survived as support sails , for example on fishing boats . 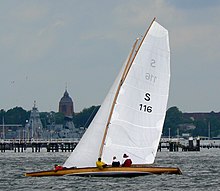 The rig differs from the usual gaff rigging, in which the gaff is guided at a large angle to the mast, with a steep gaff rising almost vertically , with which a vehicle can travel higher courses to the wind .

Forms of a steep gaff rig are the early American Huari rig and the Gunter rig . The latter comes from England in the 17th century, but is still used today in small, trailerable dinghies to limit the mast length. The long gaff is erected almost vertically in his gaff shoe, so that the visual impression of a highly rigged boat is created.

The steep gaff rig experienced its heyday especially on regatta yachts at the beginning of the 20th century, but in many cases, such as in the various classes of archipelago cruisers , these were soon replaced by the Marconi rig .