Various boats and smaller ships are referred to as cutter (loan word from the English cutter , from: to cut ' to cut '). The characteristic of the cutter is its hull shape with a sharp, (almost) vertical stem and a clear taper at the bow and stern. This line layout enables a relatively high speed despite the typical compact shape.

Cutter hull from the 18th century; In contrast to today's cutter, the historic hull still had a transom

The cutter was not built until the middle of the 18th century. Compared to older types of ship, the forecastle was much sleeker and therefore faster. At the same time, however, it could also transport a load that was relatively large for the size of the vehicle. This combination of load capacity and speed made it attractive for precious cargo. Another special feature presented the clinkers planking is the hull. At the time, was actually in modern vehicles Carvel common. For the coastal population of the time of origin, who until then only knew clumsy boats, the cutter appeared to be real progress. Cutters were initially driven with all possible sails, even square sails , and their hull lengths were between 10 and 25 meters long.

In addition to its special hull shape, the rigging came with only one mast , on which a gaff sail was used as the main sail and further square sails above it in front of the mast .

The Schrat sails were not yet the rule when this type of ship was created. It prevailed when it became clear that the Schrat sails are superior to a yard sails in their sailing performance and require fewer staff to operate. At that time, even sleeker hulls appeared, which partly replaced the cutter as a hull shape.

The cutter has been preserved in its hull shape as a robust, seaworthy dinghy with hull lengths of approx. 2.5 to 12 meters. Since in the days before the motorization of boats and ships , larger dinghies were not only rowed, but also sailed, a “trimmed” schooner sails were adopted on the cutter, as this was easier and faster to rig up and down than a yard sails. As already stated above, it is clearly superior in terms of its sailing performance and demands on the crew - a sloping sail cutter can also be operated as a larger boat in an emergency by one man, even a small square sail cutter, on the other hand, always requires at least four men.

Towards the end of the 20th century, the traditional cutters with multiple foresails saw a renaissance in sport boat construction . Just the single-handed round the world sailor rely on being able to control their sail area with little effort. Even racing yachts with little crew are therefore often provided with so-called cutter rigs , a direct further development of the cutter rigging.

Deployment of the starboard cutter of the Gorch Fock . The cutters have since been removed for weight reasons.

Cutters could be designed as war, trading or fishing vessels and were accordingly designated with one or more intentions. Some important categories are listed below:

In the past, the cutter was the most frequently used dinghy. After the ships were equipped with davits for the boats, the cutter was the largest dinghy suspended in this way. Therefore it also served as a lifeboat . These cutters still have eight to fourteen oars for rowing. They are rigged as a ketch with a foresail , a lug sail without a boom as a mainsail and a lug sail with a boom as a mizzen sail . Later the cutters were also equipped with steam engines , electric motors and finally with combustion engines. The Imperial Navy carried cutters in four sizes from 7.5 to 9 meters in length. Today's sport boat classes are derived from the cutter II class, marine cutter (K II K) and youth hiking cutter (JWK). The cutter ZK10 is also based on the dinghy. 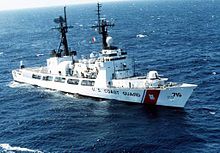 With the British Border Force and the US Coast Guard , almost every vessel is called a cutter , regardless of the actual boat type . Originally sailed cutters were actually used for this purpose, the traditional hull designation has become over time the functional designation "coast guard vehicle".