The Gorch Fock , sometimes referred to in the literature as the Gorch Fock II , is a sailing training ship of the German Navy which was commissioned in 1958 and was rigged as a barque . She is a newer sister ship of the first Gorch Fock, which was built in 1933 and named after the writer Gorch Fock , who sailed in the Skagerrakschlacht on the SMS Wiesbaden and stayed at sea .

After commissioning, the ship was initially under the command of the training ships . After its dissolution, it was subordinated to the Mürwik Naval School in Flensburg - Mürwik in 1966 . The home port is Kiel , her berth is at the Tirpitz mole at the northern end of the keel line , after she had her regular place in the center of the Blücherbrücke in Kiel.

According to official statistics, the ship had covered 741,106 nautical miles by January 2011 . In the course of 439 port visits, 180 different ports were called and over 60 sovereign areas on all continents were visited.

Rear view of the Gorch Fock on the Tirpitzmole

The ship was laid down on February 24, 1958. Like the first Gorch Fock of the Reichsmarine , it was built by Blohm & Voss . Due to the sinking of the Pamir in 1957, there had been strong controversies among the population and the decision-making bodies about the completion and commissioning of the ship; among other things, the usefulness of a sailing ship for contemporary military tasks was questioned.

The launch took place on August 23, 1958. Here held Rudolf Kinau , the brother Gorch Fock, the naming ceremony speech on Low German . The baptism itself was carried out by Rudolf Kinau's daughter Ulli Kinau. On December 17, 1958, the sailing training ship was put into service. On August 3, 1959, the Gorch Fock began her first trip abroad from Kiel. Over the next few years, the ship became known worldwide as the “Ambassador of Germany”. In 1964 it represented Germany at the world exhibition in New York . In 1974 the Gorch Fock visited a Polish port as part of the tall ship regatta Copenhagen - Gdynia as the first warship of the German Navy, in 1977 the Yugoslav port of Split . In August 1976 she was declared the winner of the tall ship regatta on the occasion of the 200th anniversary of the USA, because she was in the lead when the regatta was abandoned due to lull.

In 1985 and 1991 there were various conversions and in 2000/2001 a longer shipyard layover, so that some training trips were completed with the Norwegian Statsraad Lehmkuhl , which was chartered for this purpose .

In 2012 repairs were necessary for around ten million euros, although the ship had only been overhauled in 2010.

In order to compensate for the failure of the training ship, the German Navy used the roughly identical Romanian barque Mircea for training in 2017 and 2018 . In autumn 2019, the Navy announced that it would carry out part of the training for its offspring on the Alexander von Humboldt II in 2020 .

The Gorch Fock is to be used as a sailing training ship beyond the year 2030.

Since December 2015 the ship has been undergoing a complete basic overhaul. The contract was awarded to Elsflether Werft , which was responsible for the work and a. made use of the docking capacity of the Bremerhaven shipyard Bredo .

Initially, 10 million euros were estimated for the repair work. During the work that had started, further damage was found in the Elsflether shipyard in January 2016, whereupon a construction freeze was imposed in October 2016 and an economic feasibility study was instructed. On January 26, 2017, Defense Minister Ursula von der Leyen finally decided to continue the repair work, the cost of which has now been estimated at 75 million euros. According to the shipyard in March 2018, the costs could rise to 135 million euros and the overhaul could take until mid-2019.

In the course of the repair of the sailing ship, there were allegations of corruption and unfaithfulness against the shipyard and an employee of the Navy in December 2018, who cost the two board members of the Elsflether shipyard the posts. The Osnabrück public prosecutor's office is investigating the suspicion of corruption. Due to the sharp increase in the cost of the repair work and the suspicion of corruption, work on the ship was suspended by the Ministry of Defense in December 2018. A report by the Federal Court of Auditors in March 2019 found numerous deficiencies in connection with the repair. Although not all defects were documented before repairs began, the Bundeswehr claimed that it was cheaper to repair than to build a new training ship. The Federal Audit Office demanded that the repair costs be capped and that the repair work be stopped if necessary and that a new ship be considered. 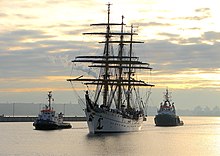 All officer candidates of the troop service and the medical officer candidates of the German Navy are trained in the context of foreign training trips on the barque, as are the NCOs of the "seamanship service" ( application series 11). A permanent crew of 83 people can look after up to 138 course participants. The regular crew consists of 11 officers including a meteorologist and ship's doctor , 14 non-commissioned officers with portepee , 35 non-commissioned officers and 23 crew ranks .

The training of trainee naval officers on the Gorch Fock has been subject to ongoing scientific research since 2005. Above all, it is intended to train the soldiers' ability to work in a team and to convey their first experiences with the sea. This sea training was carried out on the training ship Germany until it was decommissioned in 1990 , in particular the further technical and operational training of the OA. Since then, this has mainly been done on units of the destroyer flotilla (now Einsatzflottille 2 ). During her trips to all parts of the world, the Gorch Fock also serves to represent Germany and its navy.

During the 156th / 157th A 25-year-old officer candidate died on November 7, 2010 after falling from the rigging . Like the other cadets, the fallen officer candidate had to climb the mast seven times in a row. There was no exercise for getting up, nor was there any security.

After this incident, some of the officer cadets refused to climb a mast. As a result of the events, some crew members wanted to leave the ship. Two more experienced crew members tried to make the ship management understand the problems and fears of many crew members. A discussion broke out on how to deal with the death of a comrade. Some media spoke of a mutiny . Both the Defense Commissioner Hellmut Königshaus and the spokesman for the Navy denied this representation.

The training company was interrupted. An investigative commission with Karl-Dietrich Haase was ordered on board to clear up this and other facts. The commander Norbert Schatz was temporarily released from his duties in January 2011. For the transfer of the ship to Germany, his predecessor, Captain Michael Brühn, was used as an absentee replacement. The Naval Commission could not find any wrongdoing by Schatz. At her own request, Schatz is no longer returning to the command post.

On August 24, 2012, Helge Risch formally took over command of the Gorch Fock .

After an initial phase out at the end of November 2012, cadet training was resumed in January 2013. In 2012, the Gorch-Fock training mast was set up on the grounds of the Mürwik Naval School for pre-training purposes, on which the officer candidates can gain their first experience in rigging. After almost two years, Captain Helge Risch handed over command of the ship to Frigate Captain Nils Brandt on June 28, 2014.

Information board of the Navy at the Tirpitzmole

Name of the most important sails

The Gorch Fock is built according to the same plans as the subsequent sister ships of the first Gorch Fock , which were slightly larger. However, the safety standards were significantly improved after the sinking of the Pamir .

The steel hull of the ship is designed as a smooth decker with an extended poop and back . The rigging on the two front masts consists of a jib or mainsail , double Mars sails and a single bull sails as well as a royal sail , the mizzen mast is designed as a pole mast with 2 superimposed gaff sails . The mast height is 45 m in the pre-top, 44.90 m in the large top and 39.80 m in the mizzen top, each calculated above water. Its 23 sails are structured as follows: 10 yard , 6 stay , 4 headsails , 2 mizzen and 1 mizzenoppsail. Main frame 24 m, the bowsprit measures 18.8 m, of which 8.9 in front of the bow, and the mizzen tree 16.4 m. The slats of the two front masts are set up for lowering in order to enable navigation on the Kiel Canal . In the meantime, the ship received additional "sets" with a slightly different cut, which increased the total area of ​​the sails to around 2000 square meters.

The ship built in 1958 is largely identical to the Gorch Fock built in 1933 . To differentiate the ships, the year of construction or a number in brackets are sometimes added in brackets, but these do not belong to the ship's name . This also applies to the prefix SSS for sailing training ship, which appears regularly in the literature. Both ships are named after the writer Gorch Fock.

The rigging bars and yards were originally intended for the construction of the sailing training ship Herbert Norkus in 1939 , but were stored due to the war and then used for the new building.

The Gorch Fock has changed her figurehead five times so far. The shape of the figure, a stylized albatross , remained the same except for details. The design comes from the Bochum artist and former submarine commander Heinrich Schroeteler .

The Gorch Fock has on the way home from the 62nd overseas training trip under the command of Captain Horst-Helmut wind in the sea area English Channel / North Sea in southwest storm from 17 to 18 November 1980 a Etmal (the within - not always accurate - 24 hours covered distance) of 323 nautical miles and thus surpassed the previous record for displacement sailing ships in this sea area by seven nautical miles. At times a speed of 17 kn was measured.

In a storm low in the Florida Strait with wind speeds of up to 70 kn, this record was exceeded and the ship reached 18.2 kn. One of the sails broke, whereupon the training ship was steered out of the tropical storm.

Since the 1960s, the ship has had its own Gorch Fock song , which was composed by the later commander, Hans Freiherr von Stackelberg. Two lines of the text address the tough reality of training:

"The boatswain is not always pleasant / some mates are feared too / and their proximity is often quite uncomfortable / everyone is a comrade at heart!"

There is also a Gorch Fock March.

The commanders of the Gorch Fock hold the rank of sea ​​captain .

Gorch Fock lies on the pier of the boat harbor in front of the Mürwik Naval School (Flensburg), to which she is under the command
*AAR - foreign training trips under this commander; after Manfred Ohde: Sail training ship Gorch Fock . Stuttgart 2008. 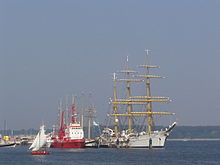 Gorch Fock (2002) at the Blücherbrücke in Kiel

An engraving by Gorch Fock (1958) is shown on the back of the 10 DM note of the third series from 1963, of which many millions were in circulation.

For the 50th anniversary of the launch in 2008, Deutsche Post issued a special postage stamp . A 10 euro silver commemorative coin was also issued on the occasion .

The city of Kiel has issued a 0 euro note with a picture of Gorch Fock as a souvenir .

Wikinews: Gorch Fock  - on the news