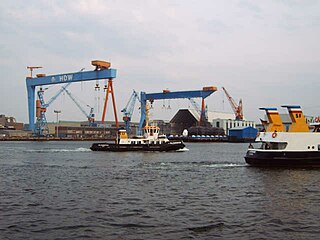 The HDW shipyard in Kiel 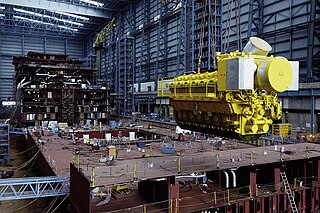 Inside the shipyard: Ship's diesel engine waiting before being installed in a ship

A shipyard (alt-niederl./friesl .: Who builds on the water , see also: Warft ) is a company for the construction and repair of boats and ships .

Until the beginning of the 20th century, a river bank was also referred to as the or the shipyard , which was set up for the trade, repair and construction of ships .

Each ship receives a construction number at the start of construction. (Build number). This is usually a consecutive number that indicates the respective number of ships built so far at the shipyard. But there are also shipyards which, for example, start new batch number blocks for different series.

In addition to construction, shipyards also carry out repairs, conversions and maintenance measures on ships. Here, too, ships often have to be drained in floating or dry docks , unless slipways or cranes are used for smaller vehicles .

Shipyards are mostly geared towards certain types of ships and boats. A distinction is made between the types of watercraft

Some of these are in turn specialized in special types of ships . The focus of a shipyard's activities can also be wholly or partially in the areas of construction, repair, maintenance or conversion.

Some of these tasks are carried out in naval arsenals for warships .

The Vulkan shipyard in Szczecin, 1898

The first shipyards at which ships were built in series were probably built by the Carthaginians and Phoenicians . Later, the Romans had extensive shipyard complexes, mainly for building galleys . In ancient times it was already dry dock known.

In the Middle Ages , however, ships were built in shipyards on land. The first dry docks that have been reliably archaeologically proven and still exist today were built under Zheng He in Nanjing , China , to build the legendary treasure ships at the beginning of the 15th century . With this development, the construction of large junks around 70 m long became possible. In Europe, a dry dock was first built and used in Portsmouth in 1495 .

For repair purposes, the American engineer Gilbert invented the floating dock in 1839 . Floating docks work in a similar way to submarines : When the ships enter, they are flooded and submerge so far that the ship to be repaired can enter. The water is then pumped out of the tanks or pressed out with compressed air so that the floating dock with the ship emerges so far that the bottom is dry. The construction of new ships is increasingly taking place in large, closed halls.

From the 16th century to the middle of the 20th century, the largest shipyards were initially in Europe, then also in North America.

In the course of the so-called shipyard crisis , shipbuilding capacities were reduced in Europe, with the largest shipyard capacities now being created in Japan , South Korea and China .

The three large shipyards Blohm & Voss, Hamburg, Deutsche Nordseewerke, Emden (both ThyssenKrupp Werften) and HDW were merged on January 5, 2005. To this end, the Thyssen Krupp Group, which was already the owner of Blohm & Voss and Nordseewerke, took over HDW from the US financial investor One Equity Partners . As part of the takeover, the Americans received 25 percent of the new association and 240 million euros in cash. In this way, HDW's submarine technology in particular is secured for the German locations.

In the Middle Ages , shipyards were also known as Lastadie . Port-like facilities are sometimes referred to as Lastadie.

According to the Federal Statistical Office, all shipbuilding and boat building yards in Germany made a combined turnover of around 5 billion euros in 2012. 72% of these were exports. The annual average employed around 18,000 people; almost 2% less than 2011.

In May 2017, the VSM ( Association for Shipbuilding and Marine Technology ) reported that the order backlog of the German shipbuilding industry had increased by 42 percent to a record value of 18.4 billion euros.

others in shipyards in Hamburg

others also in shipyards on the Lower Weser

others also in shipyards in Cuxhaven

China's shipyards are mainly owned by two state-owned companies with a total of 255,000 employees:

On the island of Chanxing in the Yangtze River Delta (2007) the largest shipyard in the world is being built over a length of 8 kilometers, in which ships the size of super tankers can be built simultaneously in seven docks .

Slip-on slipway with cargo and passenger ships under repair.

In Namibian German, a "shipyard" is a residential area of ​​Africans, in recent times it has often used the meaning of slum , but traditionally without this connotation.

Literature on the Nabian word shipyard