Halifax (officially Halifax Regional Municipality , HRM ) is the capital of the Province of Nova Scotia in Canada .

The urban part of the HRM is made up of Halifax, Dartmouth , Bedford and Sackville and forms a unified urban area called the Halifax Metro. As the economic and cultural center of the Atlantic provinces , Halifax has been part of the Halifax Regional Municipality since April 1, 1996, which in addition to Halifax, Bedford , Dartmouth and Sackville also includes Cole Harbor, Halifax West, Eastern Shore and other regions on an area of ​​5,490 km² united.

About 403,390 people live in the HRM ( 2016 census ), which is 40% of the population of Nova Scotia and 15% of all residents of the Atlantic provinces. This makes Halifax the largest population center east of Québec and north of Boston . Halifax also includes the remote Sable Island .

For the history of the First Nations in Canada, which long before the arrival of the Europeans also lived in the area around what would later become Halifax, see z. B. History of Canada .

On July 9, 1749, Captain General Edward Cornwallis landed with about 2500 settlers on the so-called Chebucto Peninsula to build a fortified settlement as an outpost for the British military. This small community was named after Lord Halifax (1716–1771), President of the British Chamber of Commerce.

A year later, in 1750, "Dartmouth" was founded, named after the city of Dartmouth in England and in honor of Sir William Legge, the second Earl of Dartmouth. In 1752 a ferry service was established between Halifax and Dartmouth, which today is known as the "Dartmouth Ferry" and is the oldest permanently operating saltwater ferry service in North America.

In 1758 the first assembly of deputies took place and in the same year the history of Halifax as a major port city began with the construction of the first shipyard. In 1759, Halifax was the base for British operations against the French fortress of Louisbourg .

Wars and international conflicts helped Halifax to become wealthy and prosperous through military facilities. The Seven Years War is a first example. Shortly afterwards, around 1770, Halifax was once again the starting point and base of military operations on land and sea during the American Revolutionary War . Many blacks settled in Halifax during this period, followed by Jamaicans , which resulted in a strong black community.

The power fluctuations within Europe and especially the powerful France with Napoleon Bonaparte kept Great Britain and thus also Halifax as an Atlantic bastion on constant alert. In 1812 Halifax was again in the process of arming itself against impending attacks, this time by its southern neighbors.

In the early years of the 19th century, Halifax developed between peace and war. The following significant events took place during these years: 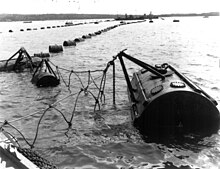 Anti-submarine network at the Halifax harbor entrance in May 1942

During World War I , Halifax was once again a hub of military operations and logistics. At least 1,635 people were killed in the explosion of the French ship Mont Blanc , the Halifax explosion that devastated large parts of the peninsula in December 1917. Over 2,000 remained missing, 9,000 were injured and 25,000 lost their homes.

During the Second World War from 1939 to 1945, Halifax was an important western anchor of the transatlantic routes for the Allied war logistics. The large sheltered waters of Bedford Bay allowed the Royal Navy and Royal Canadian Navy to assemble numerous large convoys of troops and materials. The important HX convoys had their starting point here. Torpedo nets in Halifax harbor prevented German submarines from entering. Especially the train connection and the location in the far east of Canada made Halifax one of the most important North American ports in the battle of the Atlantic .

In 1925 the transatlantic telegraph connection to Halifax was established, and " Trans-Canada Airlines " started a flight connection between Halifax and Vancouver in 1941. In 1960, Halifax International Airport opened for the next generation of travelers.

From June 15 to 17, 1995, the 21st G7 Summit took place in Halifax with Canada, the United States of America, the United Kingdom, Japan, Germany, Italy and France. The Russian President and the EU Commission President were also represented. 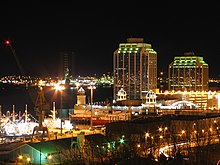 The port of Halifax has two large container terminals , an oil refinery and other facilities for loading cars and other goods with a direct connection to the railroad. There are also specialized facilities for the logistical supply of offshore gas and oil production facilities near Sable Island and for the search for fossil fuel deposits off the coast of Nova Scotia.

In recent years, the passengers on cruise ships arriving in the warmer seasons have been of importance to tourism . In 2009, for the first time, five cruise ships anchored in Halifax at the same time.

Halifax has several large convention centers that are used for business and political gatherings. Other economic sectors are fishing and agriculture as well as raw material extraction and production, as well as tourism and the general service industry. Larger private employers are JD Irving, a conglomerate with several locations in the Atlantic provinces. EastLink , a telecommunications company; Emera , an electricity company, and General Dynamics . Air Canada Jazz , a regional subsidiary of Air Canada, headquartered at Halifax Airport. Another larger airline is CanJet Airlines, which belongs to the IMP Group. Pratt & Whitney Canada operates an aircraft turbine manufacturing facility in Halifax. 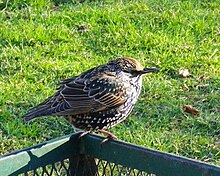 Starlings are common in central Halifax.

One of the major and largest daily newspapers in both Halifax and the entire province is The Chronicle Herald . The newspaper is sold at newsstands, online and by home delivery. Another daily newspaper is the Halifax Metro. The Coast is a free weekly newspaper distributed in the greater Halifax area. There are also several radio stations such as The Bounce 101.3FM and CBC Radio as well as regional TV stations from CTV , CBC and Global TV , which broadcast the latest regional information. Halifax is connected to the digital cable network, which is offered by Bell and EastLink , and TV channels from all over Canada and partly from the USA can be received.

Public safety is the responsibility of the 615 officers and 321 civilian employees of the Halifax Regional Police. The police has eight departments and is divided into three districts. The officers are assisted on given occasions by the Canadian Federal Police of the Royal Canadian Mounted Police (RCMP).

Halifax has five hospitals that also serve the surrounding suburbs. The Dartmouth General Hospital is the largest hospital in the city. Other hospitals include the Eastern Shore Memorial Hospital , IWK Health Center , Nova Scotia Hospital and the Queen Elizabeth II Health Sciences Center .

The network of the city library has 14 branch libraries. The central library, completed in 2014, is particularly worth seeing. It has a publicly accessible roof terrace with a sea view, and a futuristic-looking architecture that lets in a lot of daylight. 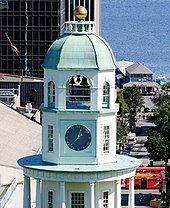 The main attraction is the star-shaped citadel (Fort George) in the center of the city on a hill called Citadel Hill . In their immediate vicinity is the Province House , which was built from 1811 to 1818 , the clock tower of Halifax Old Town Clock , Halifax City Hall and the Art Gallery of Nova Scotia . In addition to the 75 hectare Point Pleasant Park, which is located on the southern tip of the Halifax Peninsula and in which there are some military-historical buildings, the Victorian-style Halifax Public Garden, which has been a public park in the city center since 1867, is also worth seeing . Other important buildings include Purdy's Wharf , St. Mary's Basilica , St. Paul's Church and the Halifax Metro Center .

Pier 21 was a major arrival point for immigrants until the 1950s and is now a museum and national historic site.

In Halifax, 121 victims of the 1912 Titanic disaster were buried in Fairview Cemetery . Another 29 victims lie in Mount Olivet Cemetery and Baron de Hirsch Cemetery in Halifax.

The Halifax International Airport ( IATA code : YHZ, ICAO code : CYHZ) is the main air hub for the Atlantic provinces with about 160 daily departures to 38 North American destinations. The airport is located in Enfield, 35 km from downtown Halifax and 30 km from Dartmouth. The turnover at the airport amounts to around three million passengers and around 79,000 flight movements per year. In addition to scheduled flights, there are also many seasonal connections.

There are train connections for passengers to western Canada and to US Amtrak trains. Three times a week, the Via Rail train connects The Ocean / L'Océan Halifax with Québec City and Montréal .

There are several ways for drivers to get to Halifax:

Maritime Bus has good connections within Nova Scotia, New Brunswick and Prince Edward Island (PEI). This company now has service in Quebec as well as the lines to Quebec City and Montreal. She took over the main line from the unused Acadian Lines company when she went bankrupt.

In 1752 a ferry service between Halifax and Dartmouth was established on the opposite bank, known as the "Dartmouth Ferry", which is the oldest saltwater ferry in North America that is still in operation today. In 2002, the 250th anniversary of the ferry connection was celebrated. The connection between Dartmouth and Halifax was established to supply the Halifax garrison with food and ice for the ice houses. Until 1955, when the Angus L. Macdonald Bridge opened, the ferry was the only direct route between Halifax and Dartmouth. Today the ferry is integrated into the public transport of the HRM.

There are various water connections to Halifax and Nova Scotia. In addition to the liner connections listed below, Halifax is called by cruise ships from various shipping companies . Three to four ships can dock in the area of ​​Pier 21, which was previously a terminal for transatlantic connections.

→ Main article : List of personalities of the city of Halifax (Nova Scotia)