The title of this article is ambiguous. Further meanings are listed under Whitehorse (disambiguation) . 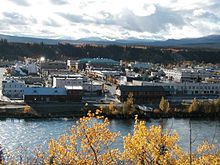 Downtown Whitehorse from the east side of the Yukon River

Whitehorse is the capital of the Yukon Territory in Canada . The place has around 25,000 inhabitants and has been town charter since 1950. It is also the only municipality in the territory with the status of a city ( English City ).

Whitehorse was named after the construction of a hydroelectric power station disappeared rapids (Whitehorse Rapids) of the Yukon River . Their combs looked like the manes of white horses.

The so-called neighborhoods Porter Creek, Riverdale, Granger, Crestview, Cowley Creek, Marsh Lake , Copper Ridge, Valleyview, Hillcrest, Lobird and Takhini and the settlement of the Kwanlin Dun First Nation do not belong directly to the core city . The Whitehorse agglomeration includes places a little further away, such as Ibex Valley .

The rapids at Whitehorse, the White Horse Rapids, 1899

As early as 8000 BC People lived in the region, as evidenced by finds at Annie Lake south of Whitehorse. They survived two silting up and a volcanic eruption with heavy ash rain.

The Klondike Gold Rush (1896–1898) brought over 100,000 people to the Yukon, most of them moving downstream towards Dawson . On June 13, 1898, the Yukon Territory was split off from the Northwest Territories and thus received an independent status and a police force. The city continued to develop as an important transport hub for the railroad with the river steamers that took over the supply of the northern areas of the territory via the Yukon River .

In the 1920s, the population collapsed again, so that the territory only had about 4,000 inhabitants.

Whitehorse experienced its revival during World War II when the Alaska Highway was built by the United States Army . In addition, a pipeline to Norman Neills at Mackenzie was built . Around 10,000 workers were hired to build the 2560 km pipeline. While Dawson became almost deserted, Whitehorse grew into the capital and administrative center, where nearly three-quarters of the population lived.

In 1956, the Canadian government forced the amalgamation of several Indian tribes in the region to form the Whitehorse Indian Band , today's Kwanlin Dün First Nation . You live in and around Whitehorse today. In 1987 the Ta'an Kwäch'än First Nation broke away from this association. They live north of Whitehorse around Lake Laberge .

Whitehorse replaced Dawson as the capital of the territory in 1952. With the Yukon Act , the territory has been similar to the provinces since 2003 .

The city is the seat of the Whitehorse Diocese of the Roman Catholic Church in Canada . The Roman Catholic bishop was Gary M. Gordon , who had previously been pastor and prison commissioner in the Archdiocese of Vancouver and was led by Pope Benedict XVI. was appointed new bishop on January 5, 2006. He left the Yukon and became Bishop of Victoria on June 14, 2014. Pope Francis appointed Hector Felipe Villa as the new Bishop of Whitehorse and the Diocese of Yukon on November 27, 2015 . The Anglican Bishop is Larry Robertson .

The main employer is the public sector (around 40%), plus tourism . Agriculture is practiced on around 12,500 hectares, mainly in the Takhini Valley west of Whitehorse.

Whitehorse is best reached by plane via Erik Nielsen Whitehorse International Airport . There are regular flights to Vancouver , Calgary , Edmonton , Fairbanks (only in summer), and once a week to Frankfurt am Main (from May to September). The airport was created during World War II and was associated with the construction of the Alaska Highway. Two runways were built here in 1941–1942. From 1960, the military buildings served as a terminal for civil traffic and were later (1985) replaced by modern buildings. The city's airport has now been expanded.

The main road connection is still the aforementioned Alaska Highway, but other roads connect the capital with the few permanently inhabited settlements in the territory.

The White Pass and Yukon Railway connects the city with Skagway , Alaska , and the regular train service ceased in October 1982. In spring 2007 it was resumed within the framework of expansion plans, further expansion plans for a railway towards Carmacks and to the coast are being planned. A small tram, known as a "trolley", travels a bit along the Yukon for tourists. She drives from Rotary Peace Park at the south end of town to the north end to Spook Creek Station.

The Yukon was used for inland shipping until well into the 1950s , but traffic over the river could not prevail, especially since the capital was moved from Dawson to Whitehorse. The most important form of public transport is therefore the long-distance bus operated by Whitehorse Transit .

Whitehorse is the starting point for numerous kayakers or canoeists who can take the 741 km wilderness tour into Dawson City, known from the gold rush of 1896/97, or 320 km to Carmacks. There are rental stations on the banks of the Yukon River.

Whitehorse is home to the Yukon's only higher education facility, Yukon College . In 1977 it partnered with the University of British Columbia . On this basis, the Yukon College of Today was created in 1983. It has been located in the Takhini district in the north of the city since 1988. Meanwhile, there is a cooperation with the University of Regina in Saskatchewan , and the college belongs to the international network of the University of the Arctic ( University of the Arctic to), the cultures around to the North Pole prescribed has (established in 2001). Therefore, the Bachelor of Circumpolar Studies course is offered, which includes topics from Northern Canada, Alaska and Northern Russia . There is also an archive (Yukon Archives) and an arts center (Arts Center) in the building.

For the indigenous peoples, the college offers the First Nations Executive Development Program and the Yukon College's Environmental Officer Training Program . These programs are designed to train administrative and management staff and protect the environment.

The city is home to the most important and best-equipped Yukon museums.

There is also the Yukon visitor center and the only surviving river boat, the SS Klondike .

The natural sights are presented in the Yukon Gardens , the Yukon Wildlife Preserve , but also in the Takhini Hot Springs . 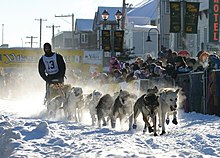 Start of the Yukon Quest in Whitehorse

Several music festivals take place in Whitehorse, including the Frostbite Music Festival in winter . The city is also the starting point for the longest dog sled race, the Yukon Quest . The city has also hosted the Arctic Winter Games several times , most recently in 2012.

Two English newspapers exist in the city, on the one hand the Whitehorse Star , which was published as a weekly newspaper in 1900 and which has been offered as a daily newspaper since 1986. The second is the Yukon News , which has been published as a weekly paper since 1960. In the meantime it also appeared as a daily newspaper, but had to be reduced to two days a week. There is also the L'Aurore boréale for the francophone population.

The annual average falls 145 cm of snow and the amount of rain is only 270 mm.