In common parlance, the North Pole is the northernmost point on earth . It corresponds to the northern pivot point of the earth's axis and is also known as the geographic north pole . There is also the arctic magnetic pole and the arctic geomagnetic pole .

The three poles of the northern hemisphere

The geographic north pole (1) is the northernmost point on earth and, according to the definition of the geographic pole, the intersection of the earth's axis with the northern surface of the earth. The geographic north pole is the antipode of the geographic south pole and has a fixed position at the geographic latitude of 90 ° 0 ′  N. Coordinates: 90 ° 0 ′ 0 ″  N , which generally applies to celestial bodies with an axis of rotation. Thus, the horizontal view from here is only in one direction: to the south. The North Pole does not have a clear longitude. However, this only applies to the point and not to the viewing direction, which is unambiguous. The geographic North Pole lies on the North American Plate , but not on the mainland , but on a 2 to 3 m thick floating ice sheet. Below is the Arctic Ocean, which is 4087 m deep at this point.90 0

The seabed was first reached here in 2007 by a Russian research expedition. Near the zenith is above the geographic North Pole the Polar Star in only 42 'Distance (2008) and the sun is here from March 21 to September 23, not ( polar day ). This is followed by slow sunset, several weeks of twilight , several months of polar night , several weeks of dawn and slow sunrise .

Since the position of the earth's axis shifts in the long term, the geographic North Pole is by no means tied to a specific location. There is a close connection between this long-term movement of the geographic North Pole and the mass redistribution in the context of global warming . Geodetic observations of the polar movement from space show that after a prolonged movement towards western Greenland , the average annual polar position began to drift eastwards from around 2005, an abrupt departure from the drift direction observed in the last century. Gravity measurements with the help of satellites show that around 90% of this change can be attributed to the accelerated melting of ice sheets and mountain glaciers and the associated rise in sea levels.

The usual compasses, the needle of which can only be rotated around the vertical axis, can no longer align themselves to the north within the radius of around 2000 km around the magnetic pole, because the horizontal component of the earth's magnetic field is too weak there for the display. A compass specially designed for such measurements  - similar to a ship's compass - points vertically downwards at the magnetic north pole according to the laws of magnetism with its "north" marking.

During an expedition of the Geological Survey of Canada in 2001, his position was determined and the annual migration up to 2005 was extrapolated. In April 2007 the position was redefined: 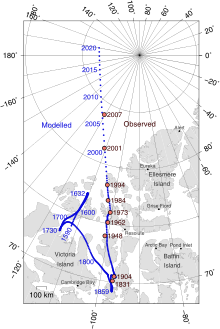 The arctic magnetic pole is therefore not fixed, but is constantly shifting according to a multilayered pattern:

From year to year the magnetic pole is shifting in a roughly predictable way. Currently it is migrating around 40 kilometers northwest each year and has left the Canadian islands in the Arctic Ocean. The amount and direction of the annual shift are not constant over the long term.

The arctic magnetic pole moves daily on an elliptical orbit around its central position.

Disturbances in the earth's magnetic field can shift the magnetic pole - as long as the disturbance lasts - by up to 50 km from its central position.

In the course of the earth's history, the earth’s magnetic field has reversed its polarity several times. This polarity reversal could be demonstrated by the alignment of iron deposits in sediments of different depths. Some scientists see the above-mentioned acceleration of the annual shift as an indication of an impending long-term polarity reversal of the earth.

The arctic geomagnetic pole (3) in the northern hemisphere is a theoretical pole of the earth's irregular magnetic field , which corresponds to the assumption that there is a bar magnet in the center of the earth . It was in 2010 at about 80 ° 1 '  N , 72 ° 13'  W on the Darling Peninsula of Ellesmere Island, which belongs to Canada . 80.02 -72.21

Contradiction between the physical and geographical designation of the magnetic pole

Magnet in the interior of the earth

Signs showing distances from the North Pole to crew members' hometowns; erected on an ice floe at the North Pole on the occasion of its arrival by the Swedish icebreaker Oden and the German research vessel Polarstern on September 6, 1991

According to their own statements, the geographic North Pole was discovered for the first time by the American researchers Robert Edwin Peary and Matthew Henson and the Inughuit Iggiánguaĸ (1883–1918, in Peary's notes Egingwah), Sigdluk (1883–1927, Seeglo) and Uvkujâĸ (1880–1921, Ooqueah) under the leadership of Iggiánguaĸs brother Ôdâĸ (1880–1955, Ootah) on April 6, 1909. However, it is not scientifically proven that this group actually reached the pole. Peary's notes are not sufficiently precise for this and Matthew Henson reports in his memoir that he was shortly before expedition leader Peary at the North Pole and met him there. Together they wanted to clarify the question of who was the first to arrive at the pole. However, this clarification apparently never came about. Peary's Greenlandic companions called the North Pole qimmersoriartorfissuaq , the place where you are forced to eat your dogs.

In addition to the aforementioned, Frederick Cook also claimed to have been the first to reach the North Pole, on April 21, 1908, a year before Peary. Peary then launched a campaign to undermine Cook's credibility. A central part of this campaign was to denounce Cook 's alleged first ascent of Denali as a lie (Cook actually did not climb the mountain). Other inconsistencies also suggest that Cook was never near the North Pole.

Peary's records do not suggest that he was at the North Pole: when he separated from his companions, he was at least 120 km from the Pole; he met them again after only 56 hours. All polar explorers of that time, for example greats like Fridtjof Nansen , considered such a workload to be completely impossible and also denied Peary's alleged previous daily achievements of over 50 km through the pack ice. Peary's credibility fell even further when the US Navy Hydrographic Office was forced to remove five of Peary's related geographic discoveries as nonexistent.

The overflight of the North Pole in 1926 by Umberto Nobile , Roald Amundsen and Lincoln Ellsworth on board the Norge has been proven beyond doubt and is undisputed; also that in 1937 a group of Soviet scientists under the direction of Iwan Papanin flew to the North Pole to build the first polar station North Pole-1 , and entered the vicinity of the pole.

The first person who demonstrably reached the pole on the way across the ice was the American Ralph Plaisted (1927-2008), who in 1968 led a four-person expedition on snowmobiles to the northernmost point on earth. A year later, the British Sir Walter William Herbert reached the North Pole with a dog sled.

The nuclear powered submarine USS Nautilus was the first ship to reach the geographic North Pole on August 3, 1958. On August 17, 1977 around 4:00 a.m. Moscow time , the Soviet atomic icebreaker Arktika reached the North Pole as the first ship to cross water. Hundreds of crew members, scientists and passengers ceremoniously entered the direct polar area. In 1991, after a difficult ice voyage, the first two conventionally powered ships were able to advance to the North Pole: The Swedish icebreaker Oden and the German research vessel Polarstern reached the pole on September 7th during a three-month expedition.

The two poles of the earth are covered by polar ice caps ; under the ice masses are z. B. subglacial lakes and volcanoes . The polar ice shelves are affected by increasing ice melt as a result of man-made global warming .

→ Main article : Consequences of global warming in the Arctic

Both poles are centers of global weather events within the framework of global teleconnection . B. with the polar vortices in the context of the Arctic oscillation or their influence on the jet stream and their role in the thermohaline circulation of the oceans .

On August 2, 2007, two Russian Mir submersibles landed on the seabed at the North Pole at a depth of 4261 m and deposited a titanium capsule with the Russian flag there. The aim of the expedition was to collect soil samples in order to support the Russian territorial claims with evidence that the North Pole belongs to the Siberian continental shelf.

Also, Denmark , Canada and Norway could raise territorial claims. In a conversation with the FAZ in 2007, the polar researcher Arved Fuchs described a political-economic race for the North Pole as probable, after all it was about fossil fuels.

North Pole of inaccessibility is a misleading term because it suggests that expeditions to the Arctic would mainly be undertaken from neighboring coasts, which it is not. Poles of inaccessibility have no practical significance. The geographical center of countries is calculated in the same way .