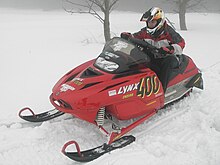 As a snowmobile , snowmobile or snow motorcycle , a motor vehicle is known that on non -groomed can transport snow slopes one or two people.

According to Art. 14 VTS, snowmobiles in Switzerland are " caterpillar- equipped motor vehicles that are not steered by braking a caterpillar" and that weigh a maximum of 450 kilograms, unless they are light or small motor vehicles, single-axle vehicles or motorized handcarts.

The forerunners of today's snowmobiles had propeller drives . The first Aerosani were developed in Russia around 1903. Even Franz Wels in Bohemia and Ludwig Maurer in Nuremberg built after 1900 propeller-driven sled. Scott used snowmobiles on his South Pole expedition; but these were not up to the requirements there. In 1922 Joseph-Armand Bombardier built the first modern snowmobile Ski-dog , which due to a typographical error became Ski-doo , as it is still used today as a brand of the manufacturer Bombardier Recreational Products . Other manufacturers of snowmobiles are Arctic Cat , Polaris and Yamaha Motor .

From 1941 to 1942, in the Soviet Union on the basis of the motorcycle M72 snowmobile Motosani MS-1 with two steering skids built front, 1971, the snowmobile Buran ( Буран ) with a directional runner.

Small ski-doos, which appeared on the Tauplitzalm in Austria around 1960 , only had a single steerable runner at the front, drove more slowly and therefore did not need as much anti-tip stabilization .

Snowmobiles are often used as a means of transport in ski areas, as work equipment for forest workers and reindeer herders. There are also competitions such as Snow Mobile Saalbach Hinterglemm . In Northern Finland, tourists are offered snowmobile safaris in which a group of tourists, guided by a local expert, cover longer distances with snowmobiles. In Central Europe, snowmobiles are used in winter by lift companies as a means of transport and by mountain rescue organizations for rescuing the slopes. The patient is transported in an Akia lying across on the rear of the snowmobile or on a mostly sprung trailer. 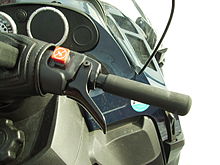 Thumb throttle of a snowmobile with a red emergency stop button

Snowmobiles are steered by runners; the engine power is transmitted via a chain. In the past, only air-cooled two-stroke engines were used; in recent years, liquid-cooled four - stroke engines have also been used more and more . The engine output ranges from around 30 kW (41 hp) to 220 kW (299 hp). The latter are used for racing series in North America and Northern Europe. The snowmobiles are usually equipped with automatic transmissions and gas lever heating.

The engine power is transmitted via an automatic V-belt system with a centrifugal clutch to a rubber drive caterpillar ( caterpillar ) in the middle . The steerable sheet steel skis (mostly with plastic attachments) are used to steer with the help of shifting body weight. A throttle grip is not used to accelerate, as is the case on motorcycles, but a thumb throttle as on quads and ATVs . If the caterpillar blocks, the slide is braked heavily. The caterpillar and skis are equipped with shock absorbers.

Almost every snowmobile has a dead man's device , a ribbon that connects the vehicle and driver. If this connection is broken because the driver falls from the vehicle, the engine switches off automatically.

Competitions are also held, mostly in the disciplines of speed and freestyle. The latter is a fixture among applicants for the US X-Games .