A four-stroke engine is a heat engine , or more precisely an internal combustion engine , which converts thermal power from the combustion of fuel into torque on a rotating shaft, i.e. rotational power . The internal processes can be described as a clockwise thermodynamic cycle ( Otto or Diesel cycle ). For one cycle (a “work cycle”) the machine requires four work steps called “ cycles ”. In a reciprocating engine , a stroke is the movement of the piston from one end point of the stroke to the other. The crankshaft therefore performs half a revolution during one cycle.

The Austrian Christian Reithmann had received several patents on a four-stroke engine on October 26, 1860. Independently of this, the technician Alphonse Beau de Rochas described the four-stroke process in 1861 . Gasoline engines and diesel engines differ in the mixture formation and the ignition process . There are both four-stroke and two-stroke variants of both .

How a four-stroke reciprocating engine works

The piston moves back towards top dead center. The mechanical work required for this comes from the rotational energy of the flywheel or, in the case of multi-cylinder engines, from the flywheel and the work cycle of another cylinder. The mixture or the air in the cylinder is now compressed to a fraction of the original volume. The degree of compression depends on the type of engine. In gasoline engines without charging a is compression ratio of over 10: 1 normal (there are large-scale motors with more than 14: 1), with naturally aspirated diesel engines about 20: 1. With charging it is considerably less, down to 7: 1 (Otto) and 14: 1 (Diesel). As a result of the compression, the mixture in gasoline engines is heated to around 450 ° C and the air in diesel engines to around 650 ° C. Shortly before top dead center is reached, the ignition is triggered in the gasoline engine and the pre-injection is triggered in the diesel engine. The time is regulated depending on the load and speed.

After top dead center - in the case of the diesel engine, the main injection still follows - the mixture charge continues to burn independently. The temperature in the burning gas mixture of a gasoline engine reaches between 2200 and 2500 ° C and the pressure at full load up to 120 bar . With a diesel engine, it is between 1800 and 2500 ° C and 160 bar. The piston moves in the direction of bottom dead center, the fuel gas performs mechanical work on the piston and cools down in the process. Shortly before bottom dead center, there is a residual pressure of just under 4 bar in the gasoline engine and just under 3 bar in the diesel engine. The outlet valve begins to open.

Overview of the executions 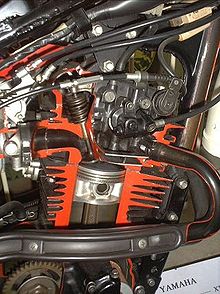 Section through an OHC motorcycle engine

There is at least one inlet and one outlet valve per cylinder, but 3 or 4 valves per cylinder are also widespread today (see next section), sometimes 5 ( Audi ) or even 8 valves ( Honda NR ). The gas exchange can also be controlled with slides .

The valves are controlled by one or more camshafts . This is driven by the crankshaft via toothed belts , timing chain (s), spur gears or vertical shaft (s). In the past, a vertical shaft was often used for the valve train of high-performance engines, for example in racing cars, airplanes and motorcycles . The camshaft always rotates at half the crankshaft speed, as one work cycle requires two crankshaft revolutions.

If the camshaft below, that is, in the crankcase are in the cylinder head hanging valves ( Overhead valves - usually via overhead valve) plunger , bumpers and rocker arm actuated in addition to the cylinder stationary valves ( SV-valve control - side valve) directly via tappets or rocker arms . Both types were common in the past, but are no longer used in new designs, except for large engines. Vertical valves have only been used in simple industrial engines, lawnmowers or emergency power generators since around 1960 because of the unfavorable shape of the combustion chamber. Gasoline engines for cars with an underneath camshaft are essentially only built in the USA. If a camshaft is provided above the arranged hanging in the head valves ( overhead camshaft - overhead camshaft), accounting for the bumpers, for actuation of the valves are among other things tilting or drag levers and tappets in question. With two overhead camshafts ( DOHC , double overhead camshaft), the valves are actuated via bucket tappets or rocker arms, which, thanks to the dynamic rigidity of the system, ensures constant accuracy of the specified timing up to high speeds. With two overhead camshafts, variable valve control can also be implemented via two adjustable camshafts, in which the intake and exhaust timing can be changed independently of one another.

With more than one intake valve, the suction resistance is reduced; if there is more than one exhaust valve, the exhaust back pressure is reduced. A multi-valve engine therefore has faster gas exchange and better cylinder filling . It achieves a higher torque, depending on the design, even at high speeds. This results in more power than engines with two valves. The table on the right makes this clear using two Formula 2 engines ( BMW - four-cylinder ) from the 1970s: With the same displacement of 2 liters, the conversion to a four-valve cylinder head in conjunction with the increased nominal speed resulted in an increase in performance of 22 percent .

Four-stroke engines dominate today in the entire automobile and motorcycle construction. They even occur in small motorcycles with 50 cm³ (e.g. Kymco Agility , Keeway ), lawn mowers and other small devices, for example the Honda GX25 engine, down to a size of 25 cm³. Gasoline engines are available with displacements of up to 3.5 liters per cylinder (for example Lycoming XR-7755). The largest four-stroke engines are diesel engines with a displacement of up to 50 liters per cylinder and a fuel consumption of 175 g / kWh heavy fuel oil (e.g. Wärtsilä 38) and a thermal efficiency of approx. 50%. Operated with natural gas, they achieve a fuel consumption of 165 g / kWh or an efficiency of 52% (for example Wärtsilä 31).

Four-stroke combustion engine without valves, in which the gas is fed in and out through grooves in the rotatable piston.
The four bars
1. Suction
2. Compression
3. Work
4. Ejection
(animation)

Some forms which vary the principle of the four-stroke engine are technically and economically important.

Motors with timing variants are produced in series, see Miller cycle or Atkinson cycle . Balancer shafts are occasionally used in automotive engineering . They reduce the free inertia forces created by the rising and falling pistons .

For areas of application in which light and position-independent lubricated four-stroke engines are advantageous, there are variants operated with a two-stroke mixture. As with other mixture-lubricated engines, there is no oil tank, oil sump , oil pump , oil retention system or oil filter . With a suitable construction, fuel and oil, pollutant emissions through oil combustion can be reduced below the limit values ​​of the emissions standard for four-stroke engines. Such motors are preferably used to drive portable motorized devices (for example Stihl "4-Mix").

Certain special designs of four-stroke engines do not have a camshaft. The valves are operated pneumatically, hydraulically or electrically. This type of valve train has not yet established itself in series engine construction. But the development of electromagnetic valve actuation has been advanced since the late 1990s.

There are also different types of slide controls . Motors of these types have sleeve or rotary slide valves for gas exchange and can get by with fewer moving parts than conventionally controlled 4-stroke motors.

Another design that has not yet been used in series production is the four-stroke internal combustion engine without valves (2), which works in a known manner in the four strokes of fresh gas supply, compression, working stroke and exhaust gas discharge. However, the process is not controlled by slides or camshafts and valves, but by the periodically rotated working piston, which has inflow grooves and outflow grooves on its circumference. The rotation takes place via the anchor-shaped connecting rod, which engages with its teeth in the ring gear located on the underside of the piston with each crankshaft revolution and moves it further by one pitch. This rotates the piston four pitches with each cycle. Depending on the size of the piston, the number of teeth on the ring gear must be divisible by four. The connection between the connecting rod and the working piston is a freely movable component such as a ball or a self-aligning ball bearing. The piston length must be longer than the piston stroke, which leads to comparatively large oscillating masses and is therefore more suitable for low speeds. The complete functional sequence can be seen in the adjacent animation, as it is also described in the patent publication DE 10 2006 027 166.

In addition to the reciprocating piston engine described here, a special design of the four-stroke engine is the rotary piston Wankel engine , in which intake, compression, work and ejection take place during one piston revolution.

All attributes of the place used here ( top dead center, downward movement, lower side, overhead camshaft) are fixed terms and do not change when an engine "lying" or "suspended" is operated (upside down).