Work ( symbols of English work ) is in the physics the energy caused by forces acting on a body is transmitted. It is said: “Work is being done on the body”. This happens when a force acts on him along a path . In this simplest case, the work performed is calculated as the product of the force acting in the direction of travel and the distance. In the case of non-linear paths and non-constant forces, the work is the curve integral over the scalar product of force and path.

In thermodynamics , work is a process variable . In a system can be transmitted energy in two ways: in the form of heat supply or in a mechanical way (e.g., by compression.) (Eg by heating.). Since a force acts along a path during compression, the energy transferred is called work (symbol ). In both cases, according to the first law of thermodynamics, the internal energy of the system changes.

If you push a cup over the table with your finger while applying even pressure, the force exerted by the finger on the cup is, for example . If the cup is shifted by the distance , the finger does the work after the shift

done on the cup.

According to Newton's Third Law , the cup exerts an equal but opposite force on the finger during the displacement . So the cup does the work on the finger

The negative sign means that the work is withdrawn from the finger.

In accordance with the principle of energy conservation , the energy supplied to the cup in the form of work is therefore equal to the energy withdrawn from the finger. The points of view “finger does work on the cup” and “cup does work on the finger” are equally possible, and the one that is clearer or more convenient in the present situation can be chosen. However, it is always important to pay attention to the correct sign and to make it clear which of the bodies involved is considered to be doing the work.

The cup, in turn, creates friction work when moving over the table top. The work done on the cup is ultimately completely converted into heat. Since the determinants of the work - the force applied and the distance covered - can easily be measured, JP Joule was able to easily determine the amount of heat released during his experiments on the mechanical heat equivalent as a result of the mechanical work applied using these quantities. Other forms of energy can be traced back to mechanical work in a similar way.

If a ball of the mass falls through a viscous liquid (e.g. honey), in principle the same conditions apply. Due to the acceleration due to gravity , the constant weight acts on the ball and does the work on the ball in every meter that falls through . This work is converted into heat by the internal friction of the fluid.

As the comparison of the last two examples shows, it only depends on the distance covered (here ), but not on the speed at which the distance is covered. It is irrelevant whether the ball is dropped at the beginning of the measuring section or whether it falls through the section at high speed when coming from a great height. 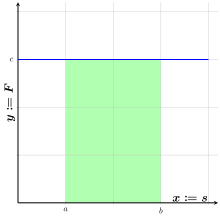 In mechanics, work is defined as the scalar product of force and distance: If a constant force acts on a body on the straight line from point A to point B , then the body does the work

performed. It is the connection vector from A to B, and its dot product with the vector is the product of the magnitudes and times the cosine of the included angle.

The meaning of the physical term work is based on the following fact: If the observed force accelerates the body, its kinetic energy increases on the way from A to B by the work performed on it.

If the constant force acts in the direction of the distance covered, then the work is the product of the amounts , since the angle is zero and its cosine = 1.

If the direction of the force is opposite to the direction of movement, then the two vectors form an angle of 180 °, the cosine of which is −1. In this case, negative work is done on the body, i.e. energy is taken from it, it becomes slower.

If the direction of the force is perpendicular to the path, no physical work is done. The physical term does not correspond to the everyday understanding according to which every porter is paid for the work they do. 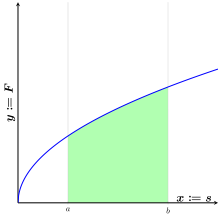 If the force is not constant along the whole path or the path is not straight, so the work can be calculated approximately, by the way by a broken line of N straight sections with approaches where the force can be respectively approximately assumed to be constant . The work done along the entire route is then approximately obtained by adding up the work along the individual route sections as

With as a sum symbol .

In order to get the exact value, the path segments are chosen to be smaller and smaller, so that their length approaches zero and their number approaches infinity. The limit value of the sum is the path or curve integral

where denote the starting point and the end point of the path.

By means of the variable substitution, the work integral can be rewritten with the speed

Is the force the gradient of a potential

then it is a conservative force . In this case the value of the integral - i.e. the work - depends only on the start and end point, but not on the exact course of the path. You can also calculate the work in a potential field simply by the difference between the potential energies :

Conversely, the potential energy at a given location is equal to the work required to bring the specimen from a predetermined zero level there.

If the path is a closed curve (i.e. if the start and end points are identical), then the work is zero.

However, dissipative forces are not based on a potential field. This is e.g. B. the case with friction . Here the work does not benefit the potential or kinetic energy of the specimen, but the internal energy of the system. The dissipation of work is an irreversible process. The entropy of the system increases without any external heat being supplied.

Force converter and the golden rule of mechanics

If you want to do a certain job with less force, this is possible with a force converter . Examples of force converters are pulley blocks , levers or gears . However, the path over which the force must be applied is longer. If, for example, only a quarter of the force required without it is required by using a force converter, this is associated with at least four times the travel. This consequence of the law of conservation of energy describes the “ golden rule of mechanics ”.

The force required for lifting is (due to gravity) ,

The distance covered corresponds to the altitude .

This means that the lifting work performed is:

The (clamping) force of a spring the spring rate is at the spring expansion : .

Since the force along the path is not constant, the integral takes the place of the product .

So is the work performed Chip working: .

Or more generally based on the speed :

The negative sign comes from the convention that work carried out from outside is to be assessed positively. The pressure can be variable or constant (depending on the type of change in state).

At constant pressure it becomes the pressure-volume work, e.g. B. when conveying a volume of liquid against a constant conveyance preventing pressure .

be performed. The sign of the voltage has been chosen so that it is positive if the electrical potential is higher at the beginning than at the end.

In the early days of mechanics, work was not yet defined by all scholars as force times path. Instead, there was a good half a century of confusion and controversy over the question of how physical work should be measured. In the 17th century, Leibniz and Descartes in particular stood against each other with their views: Leibniz preferred a pre-form of today's definition in which work is proportional to the way - Descartes represented a proportionality to the time . Descartes' view corresponded to the everyday perception of the concept of work; an effort that acts over a period of time.

Both views coexisted undisturbed as long as only the static machines of antiquity were considered (lever, pulley or the inclined plane). With these it is irrelevant whether the golden rule of mechanics is related to the saved path or the saved time. However, when Leibniz applied the comparison of both approaches in the Acta Eruditorum in 1686 in an example from dynamics , the dropping of weights, differences between the two parties arose. Because of the quadratic increase of the fall distance with time, known since Galileo , the impact energies do not match between the definitions. A weight that falls from four times the height of a reference object only has twice the time it takes to fall. Leibniz therefore assigned it fourfold energy in today's terms, Descartes and his followers only double.

Due to the arbitrariness with which both the length of the fall and the time of fall could be assigned the decisive importance for the work that became available, the dispute lasted for a long time and did not lead to any real clarification. Even Leibniz became uncertain over time and said that the variants "force times time" or "mass times speed" could also be used with caution to determine kinetic energy. In the end, today's proportionality between work and journey established itself.