The Newton [ ˈnjuːtn ] (unit symbol N) is the unit of measurement used in the international system of units (SI) for the physical quantity force . It is a derived unit that can be expressed by the basic units kilogram (kg) , meter (m) and second (s) : 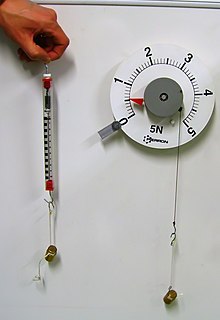 With two different force gauges the weight of a weighing piece is determined in the unit Newton (N).

The name "Newton" was proposed in 1913 at the 5th General Conference on Weights and Measures (CGPM) as the unit of measurement in the MBS system for force. At the 9th CGPM in 1948, the Newton was officially included in the catalog of named units at the suggestion of the International Union for Physics .

A newton is the magnitude of the force that has to be applied to accelerate a stationary body with a mass of 1 kg uniformly to speed within one second .

A newton is the magnitude of the force that has to be applied to accelerate a body with a mass of 1 kg .

A newton is the magnitude of the force that has to be applied to change the speed of a body with a mass of 1 kg every second by moving in a straight line .

If you want to specify the weight of an object in a gravitational field (which is usually done in Newtons), this has to be distinguished from the mass of the object, which is given in kilograms. As a rule of thumb : 1 kg corresponds to about 10 N on the earth's surface , but these quantities, like their units kg and N, are fundamentally different. Since the mean acceleration due to gravity (the so-called local factor) is at sea level , a body with a mass of 1 kg experiences a weight of 9.81 N. Conversely, 1 Newton is the weight that acts on a body with a mass of 102  grams .

Maximum loads on floors are often given in Newtons or Newtons per square meter . The tensile strength of ropes (e.g. tow ropes) or the load limit of cranes are also often given in Newtons - or they have been converted into a permissible mass using the rule of thumb above: You divide the measure belonging to the Newton unit of force by 10, which is the unit of mass To get the measure corresponding to the kilogram:

The unit symbol can be combined with the usual prefixes for units of measure . Common are: