This article deals with the unit of temperature Kelvin; for other meanings, see Kelvin (disambiguation) .

The Kelvin (unit symbol: K ) is the SI base unit of thermodynamic temperature and at the same time the legal temperature unit in the EU , Switzerland and almost all other countries. The Kelvin is mainly used in science and technology to indicate temperatures and temperature differences.

The Kelvin was named after William Thomson, later Lord Kelvin , who introduced the thermodynamic temperature scale at the age of 24. Until 1967 the unit name was degrees Kelvin , the unit symbol was ° K. 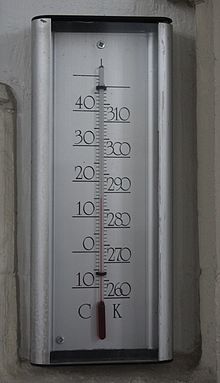 The Kelvin is defined by the Boltzmann constant . This was set to the value as part of the redefinition of the International System of Units 2019 . With this definition, the Kelvin is defined independently of materials and normals, but depends via the Joule on the basic units meter , kilogram and second (also defined via natural constants) and thus ultimately on the three natural constants , and . Previously, the Kelvin was defined by the temperature at the triple point (solid / liquid / gaseous) of water.

The zero point of the Kelvin scale (T = 0 K) lies in the absolute zero point . However, according to Nernst's heat law, this temperature is neither measurable nor achievable.

Relation to the degree Celsius

Through this definition it was achieved that the difference between two temperature values ​​measured in Kelvin and degrees Celsius are numerically the same and can be used equally.

In 1948 the 9th  General Conference on Weights and Measures (CGPM) determined that an absolute thermodynamic scale should have the triple point of water as the only fundamental fixed point. Above all, the strong dependence of the boiling point on the air pressure made temperature calibration using the previous fixed points difficult. The triple point, however, was easily and clearly reproducible. According to the new definition, the zero point of the Celsius scale (then called the centesimal scale in English ) should be exactly 0.01 degrees below. In anticipation of the future name of the unit, the symbol ° K was specified for "Degree Absolute".

In 1954 the Kelvin was defined by the CGPM in the form valid until 2019. and declared to be the basic unit. The name was initially "Degrees Kelvin (° K)" and was changed in 1967 to "Kelvin (K)". Since then the definition has been:

With the definition of 1954 the degree Celsius got a new definition. These definitions lasted until May 19, 2019. Only in 2007 was it added that it should be (of course chemically pure) water with the isotopic composition of standard ocean water . The steadily decreasing uncertainties when measuring the temperature of the water triple point made it possible to determine the influence of the isotope composition on the triple point of the water (order of magnitude of about 10 mK).

With the redefinition of the International System of Units in 2019, the Kelvin was redefined with reference to natural constants by setting the Boltzmann constant k B to a fixed value. The long-planned redefinition became possible after k B could be measured with a sufficiently high degree of accuracy.

According to Wien's law of displacement , the wavelength shift of the spectral radiation maximum is proportional to the temperature change in Kelvin.

Ratio pyrometers use this relationship to measure the temperature of a body for its emission-independent temperature measurement. The prerequisite is that the reception area is a "gray" radiator, i. This means that it has the same emissivity at both reception wavelengths.

It is often important to know whether an energetic barrier can be overcome solely on the basis of thermal fluctuations. The probability of overcoming the barrier is given by the Boltzmann distribution :

where is the Boltzmann constant . A barrier is in fact never overcome, with it is easily overcome and with the barrier is practically not perceived.

For the sake of simplicity, energies are therefore often given in Kelvin or temperatures in energetic units such as joules or electron volts (eV). The conversion factors are then:

This should be illustrated using the example of the hydrogen molecule :

The energy that is needed to produce hydrogen in the first oscillation state to convey is: . Hydrogen molecules only begin to oscillate at very high temperatures of approx. 6000 K.

The symbol for the unit of measurement is the capital letter " K ". The Unicode standard in the Unicode block "Letter-like symbols" also contains the symbol , but only for reasons of compatibility. The Unicode Consortium expressly advises against its use. U+212A KELVIN SIGN

SI prefixes for multiples (kilo-, mega-, ...) are uncommon for temperatures in Kelvin . MK, µK and nK are used for fractions of the Kelvin.

Comparison with other scales

Temperatures in Kelvin can be exactly converted using a numerical equation as follows:

The fixed points with which the scales were originally defined are highlighted in color and converted exactly into the other scales. Today they have lost their role as fixed points and are only approximate. Only the absolute zero point still has exactly the specified values.