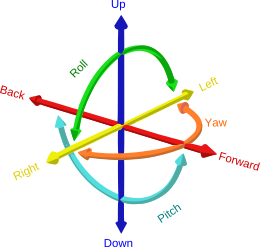 The degree of freedom describes in the narrow, mechanical sense the number of mutually independent (and in this sense " freely selectable") possibilities of movement, in the broader sense every independent variable internal or external parameter of a system . The system must have the following properties:

Double pendulum moving in one plane : The system has two degrees of freedom. His condition is by two rotation angles and fully described. Viewed in isolation, the mass point has only one degree of freedom. Its position is already described by the angle of rotation .

Each degree of freedom of a physical system corresponds to an independent generalized coordinate with which the system can be described.

What is meant by the word “independent” can be seen in an example: Assuming a particle is in a plane (e.g. on a table) with a coordinate system and can only move in this plane along an “inclined” straight line move. The position of the particle can then be described by a single number. There are various ways of doing this, e.g. B.

In each of these cases, however, it is always sufficient to specify a single value to determine the position. The particle therefore has only one degree of freedom.

The number of generalized coordinates is a system property . For example, a free mass point in space has three translational degrees of freedom that determine its position. However, since a point has no extent, it has no orientation. In contrast, a rigid body also has three degrees of freedom of rotation, each of which can be described by an angle of rotation .

According to Grübler's equation , the number of freedoms of a system that is formed from many sub-systems is equal to the sum of the freedoms of the sub-systems, provided this is not restricted by constraints . For example, a car has three degrees of freedom in the plane (change of position along the x and y coordinates and the direction of travel). A single-axle trailer has four degrees of freedom, as it can also tip forwards and backwards. If the trailer is attached to the car, the overall system still only has a total of four degrees of freedom (change of position along the x and y coordinates, rotation of the towing vehicle and change of the angle at which the trailer is to the towing vehicle), since tilting and the independent Movement of the trailer is prevented by the trailer coupling. See also degree of run .

Basically, the following cases can be distinguished:

Two free point masses and each have three degrees of translational freedom in three-dimensional space, a total of six. A double pendulum , which is connected via swivel joints (in contrast to ball joints ), can only swing in one plane, so that its mobility is restricted by the following constraints (see fig.):

These four constraints reduce the number of degrees of freedom . For the description of the system, the two angles and as independent generalized coordinates are sufficient .

In the joint of a mechanism, two parts are movably connected to each other. The degree of freedom is the number of possible movements the joint can make. In principle, the six freedoms of the rigid body are available for this. At least one of them is prevented in the joint, so a maximum of five are available for a technical application. More than three freedoms are achieved with multiple joints. Multiple joints can be viewed as a combination of several simple joints.

Joints always have a degree of freedom greater than zero. Otherwise it is not a joint, but a restraint .

Degrees of freedom of the molecules

Complex molecules have many degrees of freedom

Every molecule with atoms has general

Degrees of freedom, because you need three coordinates for each atom to define its position. These can be formally divided into translational, rotational and internal vibrational degrees of freedom:

Complex molecules with many atoms therefore have many degrees of freedom of vibration (see Molecular Vibration ) and thus make a high contribution to entropy .

For example, an atom at room temperature effectively only has the three translational degrees of freedom, since the mean energy is so low that atomic excitations practically do not occur.

The internal energy of an ideal gas with particles can be given as a function of the temperature and the number of degrees of freedom of a gas particle:

with the Boltzmann constant .

It is important that vibrations are counted twice when determining , because they have both kinetic and potential energy (see below):

Degrees of freedom of the state variables

The thermodynamic degrees of freedom of the state variables on the macroscopic level result for any systems in thermodynamic equilibrium via Gibbs' phase rule .