In thermodynamics one looks at

Further state variables are derived from this.

Some relationships between the state variables are described by the Maxwell relations and the Guggenheim square . 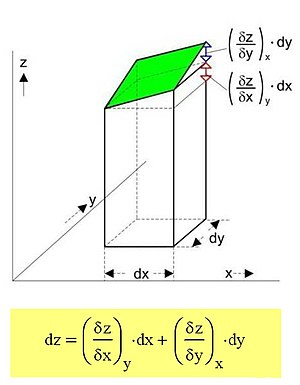 Representation of a state variable  z which (in a homogeneous single-phase system, e.g. ideal gas) can be clearly described by two other state variables (here x  and  y ) that are independent of one another . The quantity z is always a state quantity  if it has a complete differential , in other words, it can be represented as a point on a continuously running surface in space.

The thermodynamic potentials internal energy , free energy , enthalpy and Gibbs energy as well as the grand-canonical potential are extensive state variables. With their information content, they describe the thermodynamic system completely.

The thermodynamic potentials are measured against an arbitrarily set zero point - such as B. the initial state. Then the change in internal energy with the natural variables entropy and volume corresponds to the heat and work supplied :

or expressed as a complete differential:

They differ in their natural variables, which in turn are state variables and can be converted into one another with the help of the Legendre transformation . This results in z. B. the enthalpy with its natural variables entropy and pressure as:

and its full differential is:

When considering the thermodynamic potentials, the following intensive state variables are included as natural variables: pressure , (absolute) temperature and chemical potential . The change in an intense quantity always results in a change in the thermodynamic equilibrium. In dynamic systems or systems influenced by energy-storing fields, the speeds and field strengths are also intensive state variables.

Combinations of intensive state variables of the same state are in turn intensive state variables. Those of an extensive and an intensive magnitude are extensive. Such combinations appear as the difference in thermodynamic potentials. In this context, one size is always multiplied by its conjugate size. An example of this is the move work . It represents the difference between the enthalpy and the internal energy. It bears the name of a … work , but unlike others … work is not a process variable.

Experimental results show that the named variables cannot be changed independently of one another, which is also expressed in Gibbs' phase rule or in the definition of the state of a system to a certain number of degrees of freedom . The corresponding relationships between the state variables of a system describe equations of state .

Gases under normal conditions can be roughly described by ideal gas . The general gas equation applies

with the general gas constant .

The Guggenheim Square, or Guggenheim Scheme, is a tool for establishing some simple but fundamental relationships in thermodynamics from memory. They can be applied both to the Maxwell relationships and to the characteristic functions . The entropy S, the internal energy U, the volume V, the free energy F (also Helmholtz energy A), the temperature T, the Gibbs energy G, the pressure p, and the enthalpy H are linked .

It is named after Edward Guggenheim .

The Guggenheim square describes systems with two degrees of freedom. Memory aids in the form of the geometric figures octahedron and cuboctahedron have been described for three degrees of freedom. In contrast to the square, the thermodynamic potentials (G, U, H, A etc.) are not edges, but surfaces.