Systems with constraints can be particularly well described by

In the following, a particle system in 3  spatial dimensions is always considered. Without constraints one would need 3 space coordinates for the position vector of each particle, thus a total of space coordinates to describe the entire system. These coordinates are numbered consecutively:

Holonomic constraints can be represented with the full differential of a function:

which is automatically given for holonomic conditions ( twice continuously differentiable , see Schwarz's theorem ).

The full differential boils down to the fact that every holonomic constraint can be represented as an equation of the velocities:

It is z. B. to inequalities , such as restrictions on a certain area of ​​space:

or about differential, non-integrable constraints, such as equations between the speeds (e.g. for anholonomic constraints):

Non-integrable means that the equation - unlike holonomic constraints - cannot be represented as a complete differential of a function. Thus the integrability condition is not fulfilled by the coefficient functions:

Furthermore, constraints related to Their time dependency is divided into:

When applying Lagrange's formalism, scleronomic constraints usually lead to the conclusion that the potential does not implicitly depend on time. If the potential is not explicitly time-dependent, the forces are conservative and the energy is preserved . In this case the Hamilton function - the Legendre transform of the Lagrange function - is equal to the total energy.

On the other hand, holonomic-rheonomic constraints do not directly allow the conclusion that energy is not preserved. 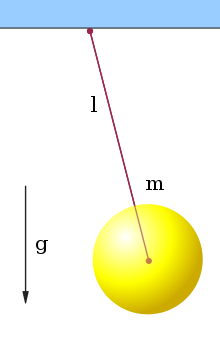 The length of the thread remains constant, the pendulum is forced onto a circular path

The pendulum: holonomic and scleronomic

The rod of a plane pendulum (i.e. only 2 spatial dimensions) should always have the same length , so it has to fulfill the following constraint based on the Pythagorean theorem (number of constraints:) :

The angle of deflection of the pendulum from the vertical forms the generalized coordinate. (There is only one there .) The coordinates and the center of the sphere depend on (assumptions: to the right, to the bottom, origin at the point of suspension):

Complete differential of the constraint:

The speed components of the pendulum can be expressed in the generalized coordinate as follows (due to the constraint, the ball can only move perpendicular to the rod; assumption here: movement to the top right):

with the amount of the total speed.

Insertion of the generalized coordinate into the constraint in the form of the complete differential:

which is thus also automatically fulfilled.

Let a particle be locked in a ball . Mathematically, this means that the distance of the particle from the center of the sphere (origin of coordinates) must always be smaller than the radius R of the sphere:

Since this constraint consists of an inequality, it is nonholonomic , and furthermore, since it does not depend explicitly on time, it is also scleronomic.