Holonom ( Greek : “completely legal”) is a property of a mechanical system. A holonomic system of bodies is characterized by the fact that the position of the body can be described by generalized coordinates , which

How many generalized coordinates describe the system, i.e. what numerical value the index has, must be determined by determining the degrees of freedom of the system.

If at least one of the conditions contains one or more speed coordinates (time derivative of the generalized coordinates), it is of the form

and if the speed coordinates cannot be eliminated by integration , the system is non-holonomic . 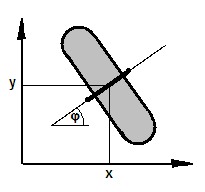 As an example, the wheel of a vehicle rolls without sliding on a flat surface. The independence of the coordinates , and is restricted by the non-integrable condition

d. H. the direction of the rolling movement can only be perpendicular to the wheel axis.

While every constellation of the system with the arbitrarily chosen coordinates , and is permissible (3  degrees of freedom "on a large scale"), so the wheel can take any position and orientation in the plane, there is a restriction when transitioning from one constellation to an infinitesimally neighboring one by the above non-holonomic roll condition; “On a small scale” there are therefore only two degrees of freedom.

This fact becomes even clearer when the facts are transferred to a four-wheeled vehicle with front-wheel steering : Even if a parking space offers enough space for the vehicle, it may be impossible to get into it.