For systems with a generalized potential and holonomic constraints , the Lagrange function reads

There are generalized coordinates and their time derivatives.

Lagrange equations of the first and second kind

The constraining forces can be calculated with the Lagrange equations of the first kind. They are equivalent to the equations that result from D'Alembert's principle . We consider point particles in the position vectors , whose coordinates by independent ( holonomic ) constraints of the mold with are limited (an explicit time dependence is allowed). This restricts the positions of the particles to a -dimensional manifold ( is the number of degrees of freedom ).

If one assumes that the external forces can be derived from a potential, one can write the equation of motion (Lagrange equation 1st type):

They are the masses of the point particles, is the potential energy. These, together with the constraints , are independent equations for the coordinates of the as well as for the Lagrange multipliers . Thus the solution of the equation system is unique.

In the case of holonomic constraints, new coordinates can be introduced that contain them implicitly, so-called generalized coordinates . With the kinetic energy

or with the Lagrange function (Lagrange equation 2nd type):

If, as in this case, forces that can only be derived from a potential (potential forces) occur, one speaks of conservative forces .

Note : Sometimes the generalized forces can be written in the following form using a speed-dependent generalized potential

Then the equations of motion also result

with the Lagrange function :

The system is then no longer conservative in the usual sense . One example is the electromagnetic field (see below).

But sometimes you still have non-conservative powers , so that the equations are written:

An example are systems with non-holonomic constraints (see above) or frictional forces.

Derivation from the Hamilton principle

The Lagrange equations of the second kind result as so-called Euler-Lagrange equations of a variation problem and provide the equations of motion if the Lagrange function is given. They follow from the variation of the action integral formed with the Lagrange function in Hamilton's principle . To do this, one considers all possible trajectories in the space of generalized coordinates between fixed starting and end points. One considers the change in the action integral when the trajectories vary

The Hamilton principle states that for the classical orbit the action integral is stationary with variation of the orbit curves:

A first order approximation is for an ordinary function

In the first order the variation of the integral results in

Now one carries out a partial integration in the term that contains the derivative with respect to time:

It is used here that

is because the start and end points are recorded. Therefore applies to the boundary terms

is a conservation quantity: its value does not change during movement, as will be shown shortly. If the Lagrange function does not depend on, then holds

But then it follows from the Euler-Lagrange equation that the time derivative of the associated conjugate momentum vanishes and it is therefore constant over time:

More generally, according to Noether's theorem , every continuous symmetry of the effect has a conservation quantity . With a cyclic variable, the effect is invariant under the shift of by any constant,

In field theory , the equation of motion results from the Hamiltonian principle for fields to

where are the considered field and the Lagrange density .

You can also write this in short as

with the derivative of variation   defined in this way .

Note: The Lagrange formalism is also the starting point for many formulations of quantum field theory .

In relativistic mechanics, the Lagrange function of a free particle can be derived from Hamilton's principle by assuming the simplest case of a relativistic scalar for the effect:

where the relativistic line element is proportional to proper time and a constant factor was chosen.

while for the Lagrange function the kinetic supplementary energy

is relevant. The Lagrange function for a particle in a potential V is then given by

For small velocities one can develop the root up to the first order :

The zeroth order of development is a constant, the negative rest energy. Since the Lagrange equations are invariant when a constant is added to the Lagrange function, the constant first term can be omitted and the classical kinetic energy is obtained again:

Richard Feynman was the first to use this approach consistently for the derivation of the equations of quantum mechanics . In classical physics, the Lagrange equations described above result from the requirement that the action integral is stationary. In Feynman's path integral formalism, the quantum mechanical probability amplitude that a system will follow a certain path between the initial and final conditions is proportional to the action integral . Paths in the vicinity of the classic path, for which the variation of vanishes, usually provide the main contributions, since the contributions with almost the same phase factors add up in their vicinity.

Oscillation system: x is the deflection from the equilibrium position

A mass is connected via two springs with a spring constant and fixed boundary conditions. The basic requirement for describing the problem in the Lagrange formalism is the setting up of the Lagrange function by setting up the terms for kinetic energy and potential energy :

The Lagrange function is therefore:

This leads to the above formulas for on

and thus to the equation of motion of the system:

The general solution of this differential equation is , is the time when the angular frequency . The constant amplitude and phase can be determined from the initial conditions.

Charge in the electromagnetic field (non-conservative)

A point charge with mass moves in the electromagnetic field. The generalized coordinates correspond to the Cartesian coordinates in 3 spatial dimensions.

The fields (magnetic field and electric field ) are determined by the scalar potential and the vector potential :

The kinetic energy of the particle is classic:

The "potential" here is, however, dependent on the speed, which is why one speaks of a generalized potential as shown above :

Thus, the Lagrange function of a charged particle in the electromagnetic field is:

The Euler-Lagrange equations lead to the equation of motion, on the right-hand side of which the Lorentz force is: 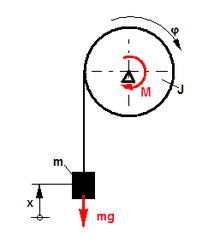 Scheme of an elevator

The axis of an elevator drum is driven by a torque . The mass of the load is the mass moment of inertia of the drum . The radius of the drum is .

The following relationship exists between the coordinates and :

The kinetic energy is:

The virtual work of the impressed forces is

The equation of motion finally follows from this

The solution of this equation for the angular acceleration gives

In Atwood's fall machine, one considers two point masses in the earth's gravitational field, which are suspended from a pulley at height h and connected by a rope of length l . The constraint in this case is:

If the rope lying on the pulley (pulley radius r) is taken into account, the following results:

The potential energy V is calculated as follows:

For the gradients one obtains

This leads to the system of Lagrange equations of the first type:

This can be resolved and z. B. for known initial conditions:

with the Lagrange function

Here are the component functions of the metric (both space and time components ). For the sake of simplicity, we calculate in systems of measurement in which the speed of light is dimensionless and has the value , and we use Einstein's sum convention .

The momentum to be conjugated is

and the Euler-Lagrange equations are

Let's use the Christoffel symbol as an abbreviation

does not change with parallel displacement along the world line

This is the general relativistic form of the equation of motion of a free falling particle. The gravitation is fully taken into account.

The Lagrange formalism is dealt with in many introductory and advanced textbooks on classical mechanics.