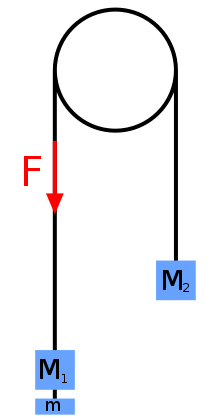 Functional diagram of the fall machine

The Atwood drop machine was developed by George Atwood in 1784 . It was designed as proof of the laws of uniformly accelerated motion . With it you can get an arbitrarily reduced acceleration instead of the gravitational acceleration with simple means .

Observation of a uniformly accelerated movement with a <g 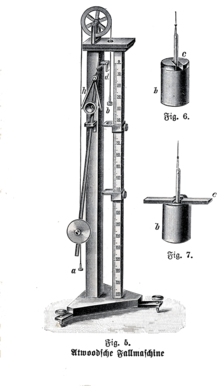 Drawing of the Atwoodian fall machine

Two mass parts ( and ) are connected via a rotatable roll connected to a cord. The reel and line are considered to be mass and frictionless .

For further consideration, the same mass is assumed for both pieces of mass , so there is initially an equilibrium of forces . Then you hang another piece of mass on one of the two pieces of mass , the result is a uniformly accelerated movement. The value of the acceleration can be calculated as follows:

Since the mass is accelerated overall , it follows from Newton's second law

which confirms the above formula for the acceleration.

The formulas given above only apply exactly under idealized conditions. A real setup has a number of deviations that affect the accuracy of a measurement of the acceleration due to gravity.

Movement of a vibrating Atwood machine with a mass ratio M / m = 4.5

The Lagrange function of an oscillating Atwood machine is:

Here referred to the acceleration due to gravity , and the kinetic and potential energy of the system.

George Atwood: A treatise on the rectilinear motion and rotation of bodies; with a description of original experiments relative to the subject . Cambridge 1784, doi : 10.3931 / e-rara-3910 (British English).