Hydroelectric power plants use the potential energy of a reservoir . The greater the amount of water stored and the greater the height difference of the barrage, the more electrical energy the power plant can deliver.

The potential energy (also called potential or positional energy ) describes the energy of a body in a physical system , which is determined by its position in a force field or by its current (mechanical) configuration.

Like other forms of energy, potential energy is a state variable of a physical system. In a closed system , the potential energy can increase or decrease when the state changes, for example when the body is moved, when it changes in height or when an atom is excited by radiation. But then another form of energy (e.g. kinetic energy, electrical field energy ) always decreases or increases to the same extent. This fact of experience is expressed by the law of conservation of energy .

Potential energy in the gravitational field

As an introduction, let's consider a cyclist who travels a flat stretch, then goes up a mountain and down last. The observation should initially take place without frictional forces .

Cyclists in detail with friction 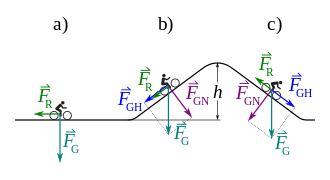 Representation of the forces on the cyclist. The weight F G , which can be broken down into the downhill force F GH and normal force F GN , and the frictional force F R are shown

The cyclist can easily reach 20 km / h on a level route, since he only has to compete against air resistance and rolling friction . If he now comes to an ascending stretch of the road , he has to exert himself more than before at the same speed. After reaching the crest, it goes downhill and the cyclist rolls on without pedaling, even having to brake so that he doesn't get too fast.

In general, the gravitational field strength and thus the weight is location-dependent. The following applies:

The negative sign results from the fact that one has to move something against the acting force in order to increase the potential energy. describes the reference point at which the potential energy of a particle should disappear. It replaces the integration constant that otherwise occurs during integration. Usually one chooses the earth's surface (see first example) or infinity (see second example). The upper limit of the integral corresponds to the position of the considered particle, not to be confused with the integration variable .

If one sets constant (which applies approximately to small height differences on the earth's surface), the equation described in the previous section results again:

If one considers a system of a planet and a sample particle far away from the planet's surface, the above approximation is no longer sufficient; the local gravitational field strength varies with the distance from the center of mass of the planet. A more precise description is possible using Newton's law of gravitation ,

as potential energy of the sample particle on the planet's surface. The last step was the new planet-dependent constant

Potential energy of a tensioned spring

From the spring force

results for the potential energy

Here is the spring constant and the deflection of the spring from the rest position.

Potential energy and the law of conservation of energy

In a closed system without energy exchange with the environment and neglecting any friction , the energy conservation law of classical mechanics applies at all times :

In words: The sum of potential and kinetic energy, including the rotational energy , is constant and corresponds to the total energy of the mechanical system.

In the Hamilton formalism this equation is called

written, where is the Hamilton function and the Lagrange function . 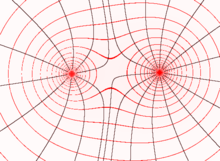 Since a conservative force field defines the force on a specimen at any location and is mathematically a gradient field , there is a scalar field equivalent to the force field . This is the potential energy for the respective location. It follows from the inversion of the work integral that an increase in energy along a path requires a force component in the opposite direction of the path. By decomposing the force field into Cartesian components , the following partial derivatives result depending on the location :

In general, this can be expressed using the Nabla operator .

The reversal of the derivative leads to the integral and determines the change in potential energy in the force field as a work integral with a negative sign. This also shows the transferability to different force fields.

In order to increase the potential energy of a body, field work must be done against the forces of a conservative force field. Every body with mass in a gravitational field has potential energy. However, this can only be increased or decreased if the body is shifted against or in the direction of the gravitational force. With a displacement perpendicular to the field lines , the body retains its potential energy. Such an area is called an equipotential surface or line and corresponds to a contour line on the map. The field line, on the other hand, describes the direction of the slope.

Path independence of the displacement work in the conservative force field

As long as there are no frictional losses or other interactions with the environment, the principle of path independence applies to a shift in conservative force fields. This means that regardless of the path taken, the same amount of field work has to be done so that a body can get from the starting point to the destination. Here the law of conservation of energy plays itself again, since the work corresponds to the change in energy.

The choice of the reference level can be made arbitrarily, but pragmatic reasons reduce the selection. In case of doubt , the starting point of the examined body is always suitable as a zero level . In the case of a gravitational field, the earth's surface is often the reference point or generally the lowest point in the environment. In addition, the reference point can be moved to an infinitely distant location ( ). The reverse of this forms the maximum potential energy at which a body is moved from its starting point out of the force field, assuming a central force field.

With electrical charges of the same sign, this leads to minimal potential energy.

The force on a charge in a given electric field is calculated from:

Inserting it into the working integral shows the relationship between the potential energy of a charge and the Coulomb potential, which also represents a scalar field. The only difference between the two fields is the proportionality factor charge:

is the so-called Coulomb potential .

Relationship between potential energy and potential

The definition is related to the force field. Based on this definition, the potential energy is only defined for particles in conservative force fields and the zero point of the energy scale can be determined as desired.

The force on a specimen of the mass in a given gravitational field is calculated from:

By inserting it into the work integral, the relationship between the potential energy of a mass and the gravitational potential is shown , which is also a scalar field.