Only with linear springs is the force proportional to the deflection and then only until the elastic limit is reached .

The term spring “constant” is unfortunate because it is not a material constant or a physical constant . It only ever applies to one particular spring. 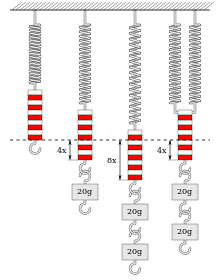 Spring elongation by weight. (As well as parallel connection of springs)

According to Hooke's law , the spring force of a spring is proportional to the deflection . The proportionality factor is called the spring constant. So the relationship applies

Instead of the letter , or is used for the spring constant.

The spring constant depends on the material and shape of the spring as well as on the direction of loading. So it is z. B. for a rod of length with cross-sectional area with a tensile or compressive force in the longitudinal direction of the rod:

It describes the modulus of elasticity , which is a material property. is the tensile stiffness in this case .

The spring constant of a coil spring is:

The spring constant of a tension spring or compression spring is usually given in the unit Newton / meter :

The description of a spring by its spring constant is a useful and usually sufficiently accurate approximation. The force-distance curve of neighboring atoms , on which the elastic behavior of solid substances is based, is almost linear in the area of ​​elastic deformation and can therefore be described by Hooke's law.

The spring constant can be determined indirectly by measuring the period of a spring pendulum .

The spring constant of ordinary metal springs remains the same over a wide range. This means that the force required for the deflection is proportional to the deflection.

With a special design - for example by changing the coil diameter or angle - it is also possible to produce steel springs whose force-displacement relationship is not linear: First, the soft area compresses, and when its coils are in contact, the harder area takes effect.
Springs in vehicles should stiffen towards the end of the spring travel in order to prevent the wheel suspension from breaking through on the body . This is often achieved by additional molded rubber bodies, which allow the wheel suspension to hit softly. Another variant consists of air springs connected in parallel.

In the case of telescopic forks on motorcycles, the limited air volume acts as a stop damper, which can also be adjusted to the spring or vehicle weight by adjusting the oil level.

In the case of metal springs that exert a torque (e.g. spiral springs in mechanical watches, moving coil measuring mechanisms and spring mechanisms , but also torsion bar springs and tensioning straps in measuring mechanisms and torsion pendulums ), there is also an almost linear relationship between angular deflection and torque. Your spring constant is given in Newton meters per degree of angle. In spring systems, the aim is to have a particularly flat curve for the torque characteristic, which in the case of spiral springs z. B. is achieved by a from the inside to the outside decreasing cross-section of the tape or by a reversing winding direction in the elevator.

When connected in series (e.g. connecting several springs together), the spring combination has a smaller spring constant (i.e. it is softer) than the softest individual spring. The substitute spring constant results from