Linearity in Science and Technology

Linearity is the property of a system to always react to a change in one parameter with a proportional change in another parameter.

This general definition applies equally to systems theory, technology, physics and mathematics. If it is not fulfilled, one speaks of non-linearity . 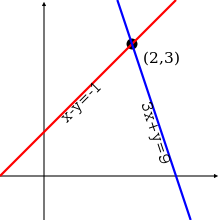 The easiest way to explain linearity in mathematics is by means of so-called linear functions . These are special functions in which one or more variables are mapped onto another according to the general definition. Linearity is also a property of various mathematical transformations such as B. the Z transformation or the continuous Fourier transformation .

Furthermore, one encounters the concept of linearity (partially tightened there) in the following mathematical topics:

See also: proportionality (as a special case of linearity)

The statistics provides methods , with the help of statistical models in linear and non-linear models can be distinguished. The specialty: linear models are linear in the estimated parameters , but not necessarily in the independent variables. What do you mean with that?

Explanation: In the quadratic equation, it is not the independent variable , but the parameters of the model (here the coefficients :) that is decisive for the existence of linearity. Because of this, multiple linear regression can be used to estimate parameters of “curved” models.

In method validation , as it is e.g. B. is used in analytical chemistry or forensics , a statistical test for linearity according to Mandel, the so-called Mandel test (or Mandel adaptation test) is common, which is used to determine which regression model ( linear or quadratic regression ) for the case at hand is to be assumed.

Linearity in Physics and Technology

The concept of linearity is based on a general linear function between real values ​​of two physical values. Are an input variable and an output variable suitable for describing a component (a device, a device) or a physical relationship , and do these variables satisfy the equation?

one speaks of a linear component or a linear relationship. Equivalent to this linear function is the statement that

is - independent of the size of and from the working point or starting point from which and count. This corresponds to the “general definition” given above.

In the special case that is, the property is characterized by proportionality . Then also applies

In a right-angled coordinate system with equally divided axes, the linear relationship between the output signal and the input signal is represented by a straight characteristic curve . In the case of a proportional relationship, this goes through the coordinate origin .

In the case of a continuously curved characteristic curve, a linear approximation can be used within the framework of a small-signal behavior , provided that the deviation of the curve from its tangent (in the respectively selected operating point) is still small for small values ​​of .

According to the Latin meaning of the word linea , u. a. a differentiation of the direction of movement of bodies according to whether the movement takes place along a correspondingly pronounced straight line (linear) or not (non-linear). Example: In an internal combustion engine , the reciprocating piston moves in a straight line (uneven translation ) and the crankshaft connected to it makes a circular movement (steady rotation ).

In chemical analyzes , the method used is linear if the measurement signal is directly proportional to the analyte concentration in the sample in a certain concentration range.

In interdisciplinary systems theory , a distinction is made between linear and non-linear systems .

A system is linear if the following two criteria are met:

The Ethnosociology used the term "linearity" to switch between linear relationship and collateral side relationship to distinguish: Linearity denotes the direct lineage of parents , their parents and so on, as well as the entire own offspring ( straight line ), while Kollateralität the indirect relationship between Siblings of all generations and their descendants (sideline).

The linearity of kinship plays an important role in unilinear rules of ancestry that determine unilinear inheritance:

Linearity of texts and media

Linearity of texts , for example, in books is when these in a specific linear order be written and read. Characteristics of linearity in texts can be:

This linearity of the text is followed by the direction of movement of the author's or reader's eyes.

Modern media such as the Internet allow this linearity to be broken up in certain areas with the help of hypertext by linking texts to one another and thus adding a non-linear component to them. The linearity of individual sections is retained, but the reader determines the reading direction by selecting the content of interest based on the hyperlinks set by the authors and thus moves non-linearly through the existing media content. This non-linearity of hypertext is considered an essential element of hypertext theory .

See also : linearity of a character

In music, linearity describes the relationship between one, two or more voices in relation to the respective rules of the musical composition . The fact that this already begins with unanimity is due to the fact that phrases, so-called (final) clauses, which have already been defined, are adhered to or not.