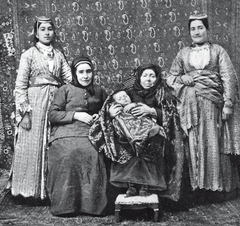 Matrilineality ( latin "in the line of mother": mothers line ) or mother sequence refers to the transfer and inheritance of social properties and owned exclusively through the female line from mothers to daughters . The transfer of family relationships , social positions , offices, prestige , privileges and property from one generation to the next takes place in a single line according to descentthe woman. The father's line is irrelevant. Also sons inherit the family name of her mother as well as the membership of a parent group as a clan , but they are not included in the maternal inheritance and can not bequeath: After a marriage children are always family counted the wife, they carry their name and show her line continues, not that of the husband (or his mother).

A purely matrilineal line of descent contains all women descending from a "ancestral mother " in an uninterrupted sequence , regardless of the question of the marital status of offspring. This line is also referred to as uterine descent (Latin "descendants from the womb "), formerly also called "maternal law".

Matrilinearity is an ethnological term used to examine the ideas of descent ( rules of descent ) and their significance for the social organization of a society , especially among ethnic groups and indigenous peoples . Its direct opposite is patrilinearity , in which descent and inheritance are only regulated via the line of the fathers (compare lineage ). There are also mixed forms, such as the bilateral, cognatic-bilateral derivation of the parentage of father and mother, which is also common in modern societies .

More than 160 of the world's 1,300 ethnic societies (13%) are sorted by matrilineal descent above the line of women, their mother, their mother ( grandmother ) and so on. This maternal line sees itself as a biological bloodline , but mostly also knows the possibility of adopting a person “in place of a child” ( adoption ). In one third of matrilineal societies, the husband moves to the wedding usually the wife and her mother ( Matricaria locally ), 38% follow the avunku- local resident usually the brother of the mother or the brother of the husband ( Uncle maternal, see avunculate ) and 18 % live patrician locally at the husband and his family.

The matrilineal descent of both male and female descendants is only formed by the female line of ancestors, the line of the mother. This can result in the offspring of non-same-sex siblings belonging to two different lineages, i.e. only the daughter's children but not the son's children - these are included in the family group of their mother - belong to the same lineage. This can play a role in marriage, especially in cross-cousin marriage . When a chief dies, the chief function is not transferred to his son, but to his brother (as the son of a common mother). The group resulting from the common unilinear descent is called lineage .

The largest matrilineal (and matrilocal ) culture worldwide are the Minangkabau on the Indonesian island of Sumatra with over 3 million members. In northeast India there are matrilineal societies among the Khasi (1.5 million) and Garo (1 million), in Africa among the Tuareg in North Africa (around 3 million) and among many Bantu peoples of the Congo region, in South America among the Wayuu (around 0.5 million), in North America with the Iroquois peoples (around 70,000), in China with the Mosuo (around 40,000) and over 100 other ethnic groups outside Europe (see list of matrilinear societies ). In Africa, the ethnologist Audrey I. Richards showed in 1950 the existence of a matrilineal belt ("matrilineal belt") among the Bantu peoples between southern Gabon and southern Tanganyika , using the example of Bakongo , Mayombe and Bemba .

Mary Douglas and others point to the decline in matrilinearity with the transition to cattle breeding and under the influence of colonization . In fact, however, the spread of cattle breeding in Africa preceded the decline in matrilinearity, as Holden and Ruth show for Malawi and Kenya . In 2018, however, the economist Sara Lowes found a clearly inverse relationship (a negative correlation ) between matrilineality and cattle breeding in the Bantu households she studied in the Congo region, which are often ethnically mixed due to migration . In this region, matrilinearity is often associated with matrilocality , but less often with the payment of a bride price . The German ethnologist Gerd Spittler (using the Bemba as an example) sees the disadvantage of the connection between matrilinearity and matrilocality that numerous female relatives or her older brother assert claims on the supplies stored there against the owner of the millet store; this lowers the owner's motivation to always keep it full.

Matrilinearity is rare when a plow is required to work the soil . This was also confirmed in the investigation by Sara Lowes. Matrilinearity would therefore be particularly widespread in horticultural cultures, where farming or large animal husbandry are not possible, but horticulture (horticulture) with the planting wood and hunting for small animals dominate. In Africa this belt ends south of the equatorial forests.  As early as 1724, Joseph-François Lafitau pointed out the key role women played in the Wyandot economy - North American forest dwellers who horticulture, fishing and hunting - and the strong position women have over men .

In Europe, cattle breeding began with the linear ceramic band culture (band ceramics) from around 6000 BC. BC and was accompanied by a change in the rules of descent towards patrilineal structures. This development was reinforced by the transition to the Kurgan culture in Southeastern and Central Europe, through which the importance of grazing continued to grow and the inheritance of property and status was patrilineal.

There was also a gradual transition to patrilineality in the development of the advanced cultures of Latin America: In the Chaco Canyon culture of New Mexico , positions of power were evidently still inherited matrilineally. For the Anasazi of the Pueblo Bonito in Colorado , the existence of a matrilinear elite for the centuries between about 800 and 1130 was proven by means of mtDNA . The end of this period coincides with the disappearance of intensive agriculture in the Chaco Canyon . With the Maya and the Inca , on the other hand, pure matrilinearity was considered a "lower" principle of descent - the nobility also had a patrilineal lineage.

Matri-linearity as the sole rule of descent is followed by 13% of all indigenous peoples and ethnic groups recorded worldwide (1998: 160 of 1267). These 63 ethnic groups come (5%), where matrilineality only a part of the social groups ( lineages , clans applies), while others after the patrician linear align paternal lineage (see also the two-part Moiety ).

A practical example illustrates the differences to purely matrilineal societies:

In conservative and Orthodox Judaism , the mother is decisive for religious affiliation: a Jew is only a child of a Jewish mother. In the State of Israel , too , only those whose ancestors were Jewish up to four generations ago are officially considered Jews, i.e. in a purely maternal line back to their own great-great-grandmother.

The woman-centered residence ( residence rule ) strengthens the close relationships between the wife, her sisters, her mother and their sisters ( aunts ), while the husband's family is not seen as related (also known as matri focality : focus on the woman / mother) . Usually, mothers, sisters and daughters form a core group, up to and including extensive Matri clans , within which all family relationships relate to only one line of mothers. All sons marry out (see exogamy ), daughters bring in husbands from other descent groups. Husbands remain allocated to their own family, whether this matrilineal structured or patrician linearly after the fathers line.

18 percent of matrilineal societies live patrician locally the husband or his family.

38 percent follow the avunku local rule of residence with the brother of the husband's mother (with his mother's uncle ).

Family systems with a matrilinear structure often show the so-called avunculate . In these systems, the wife's brother ( uncle ) takes on the social father role for his sister's children, the biological relationship of a father to his children thus plays a subordinate role. In matrilineal societies, the authority of the woman’s brother often resides in the family.