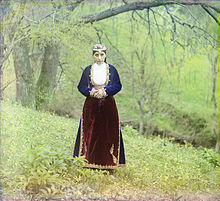 Armenian girls in Iran , during the Pan-Armenian Games in Tehran (2016)

The Armenians ( Armenian Հայեր Hajer ) are an ethnic group that has lived in the area between the highlands of Eastern Anatolia and the Southern Caucasus for around 3500 years . This area is also known as the Armenian Highlands . At the same time, the Armenians are the titular nation of the Republic of Armenia , where they make up the majority of the population by far. There are around eight million Armenians worldwide, outside of Armenia and the like. a. in the unrecognized Republic of Artsakh , Russia , France , Iran and the United States .

The name Hajer and the first foreign name Armen der Armenians go back to some of the earliest tribes in the late Bronze Age that formed political forms of organization in the Armenian highlands: the Hajaša in the 15th to 13th centuries BC. In the northwest and the poor Shupria in the 13th to 12th centuries BC. In the southwest. The term poor , used by the ancient Greeks and Persians to describe the Armenian highlands and its inhabitants, appears for the first time at the end of the 6th century BC. In the Greek historian Hekataios of Miletus and in the trilingual Behistun inscription of the Achaemenid king Dareios I around 520 BC. Chr. On. Other peoples in the area also used the term poor , with medieval Georgians calling the Armenians Somekhi and their country Somkheti .

The oldest documented language in the area of ​​later Armenia is Urartian , which has been spoken since the end of the 9th century BC. Has been handed down in writing. It is related to Hurrian and - in contrast to Armenian  - not an Indo-European language .

Some researchers and linguists suspect the original home of the Indo-European languages and thus also of Armenian in today's Armenia or in a nearby region of Asia Minor (Anatolia). A genetic study supports the mythological origin of the Armenian people around 4500 years ago and also supports the theory of the Armenian-Anatolian origin of the Indo-European languages. Furthermore, Armenians are closely related to the ancient and modern peoples of Anatolia, southern and southeastern Europe and Iran. Gamkrelidze and Ivanov consider the Armenians to be native people of eastern Anatolia.

The Armenian language forms a separate branch of the Indo-European languages. Lexical research shows that Armenian is related to Greek and Indo-Iranian languages .

In 1968 Diakonoff pleaded for an immigration of the Armenians before the emergence of the Urartian Empire, as this would have represented a barrier to immigration and documents would have to be available. Zimansky, however, thinks it is likely that Armenians from the Muški area in the west under Rusa II in the 7th century BC. Were deported to the Lake Van area.

Under Sarduri II the šurele were exempted from military service in Urartu . Diakonoff sees in them the ethnic Urartians. After that, the army consisted mainly of the hura dele (LUA.SI), the warriors who perhaps came from the deported population of Urartus (A.SI.RUM) . Diakonoff assumes that these deported residents were "proto-Armenians". Diakonoff wants at the time of Tiglath-Pileser I. in Tur Abdin proven muski equate with the Armenians. Kapantsan tried to find evidence of Hittite loanwords in Armenian.

After the heartland of Urartu in the early 6th century BC When it became part of the Medes Empire , an allied king of the Orontids ruled there . The Greek historian Hekataios of Miletus mentions around the middle of the 6th century BC. First the Armenoi as masters of the former Urartu.

The Armenians themselves regard Hayk as their legendary progenitor. According to a report by the late ancient Armenian historian Moses von Choren, he emigrated with his family from Babylon to the region around the Ararat. The Armenians call themselves Hay and their nation Hayastan after him. This is strikingly similar to the name of the empire Ḫajaša , which from Hittite sources for the 2nd millennium BC. Is documented in northeastern Anatolia.

The Armenian Empire, also called Greater Armenia in 95 BC Chr.

Independent Armenian kingdoms such as the Artaxids and Bagratids as well as the Rubenids , who ruled the Armenian Kingdom of Cilicia , remained the exception in history. Great powers like the Persian Empire , the Roman Empire and the Parthians , Byzantium and the Sassanids or later the Ottoman Empire and the Russian Empire often fought over this region. 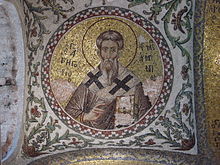 Gregory the Illuminator, Byzantine mosaic from the 14th century in the Pammakaristos Church in Istanbul

The Christianization of Armenia took place early, as early as 301 under the leadership of Gregory the Illuminator and King Trdat III. which led to the establishment of the Armenian Apostolic Church . This made Armenia the first Christian state in the world. After the collapse of the Bagratid kingdom in the 11th century, many Armenians emigrated from Eastern Anatolia to Cilicia , where they established the Kingdom of Cilicia, which existed from 1080 to 1375, and thus established the Armenian diaspora . Many Armenians later emigrated from there to the Crimea , Russia , Poland , Romania and Moldova . In 1604, under the Persian Shah Abbas the Great, a mass deportation of Armenians from the heartland of Armenia to Isfahan , where they founded New Julfa . Their descendants made it to India , Singapore , Java and Australia . 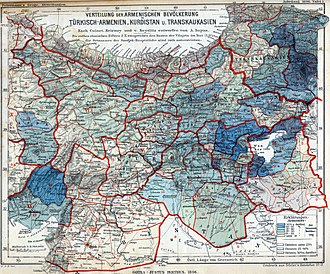 Historically, Armenia has been divided into Eastern Armenia (under Persian, later Russian rule) and Western Armenia (under Ottoman rule) since the 18th century. In Eastern Armenia, Russian pogroms triggered a wave of emigration to Western Europe at the end of the 19th century . The genocide committed by the Ottomans during the First World War almost wiped out the western Armenians in their traditional settlement area. The existing Republic of Armenia came into being after the First World War and was incorporated into the Soviet Union in 1921, after the collapse of the Soviet Union it declared itself independent in 1991.

In the Ottoman Empire , today's Turkey, the (Christian) Armenians played a role in state and society similar to that of the Phanariotic Greeks , and after Greek independence in 1823 they even took over their role as loyal state servants of the empire. Armenians held high state and government offices and formed an important part of the diplomatic service of the Ottoman Empire. From 1860 to 1915, the Ottoman governor of the autonomous province of Lebanon was usually Armenian.

The Armenians were persecuted in the Ottoman Empire from 1894 to 1895 and 1909 , but especially from 1915 to 1918 . Between 300,000 and more than 1.5 million fell victim to genocide in the First World War . A number of Armenians were able to flee and settled in Caucasus Armenia. Some were taken in and hidden by Turks and Kurds . About 50,000 Armenians live in Turkey, the vast majority of them in Istanbul .

During the nationwide state-staged pogroms against non-Muslim minorities in the night of September 6th to 7th, 1955 by the government of Prime Minister Adnan Menderes , Armenians were victims as well as Greeks , Jews and Arameans . The Armenian community in Istanbul, largely spared by the wave of arrests of April 1915, then left the city in large numbers, as did the Greek population. The Grand Vizier of the Ottoman Empire, Damat Ferid Pascha , admitted crimes against the Armenians in 1919. Nevertheless, the systematic persecution and expulsion of the Armenians is repeatedly denied by the Turkish government - as by all previous Turkish governments . Recognition of genocide is even threatened with punishment by Article 301 of the Turkish Penal Code.

After the traumatizing events in connection with the genocide, the novel The Forty Days of Musa Dagh by Franz Werfel , published in 1933, had an identity-forming meaning for the Armenians and their diaspora. The Armenian memorial site Zizernakaberd commemorates this with a plaque.

The Armenian language forms a branch within the Indo-European language family . It is increasingly recognized that the relatively close relationship with the Greek language requires a common original language , which - with Albanian - is called Balkan Indo-European . The phonologist Jan Henrik Holst assumes that Albano- Greek and Armenian first developed from this . Only later did Albanian, Greek and Phrygian and Macedonian split off, which in turn explains the linguistic affinity of Armenian to Phrygian, which was extinct by the 7th century at the latest and was also spoken in Anatolia, west of Armenia.

A written Armenian language has existed since the beginning of the 5th century. The Armenian alphabet was created in 406 by Mesrop Maschtotz , a monk , on behalf of the king and Catholicos Sahak Parthev and initially consisted of 36 letter characters. Two more characters were added in the 11th and 12th centuries for writing foreign sounds. The Armenian alphabet is used almost unchanged.

→ Main article : Armenians in the diaspora

Armenians at the later destroyed Genocide Memorial Church in Syria , near Deir-ez-Zor

About three million Armenians live in the Republic of Armenia . There have been Armenian communities in Iran and Georgia for centuries . There are also strong historical Armenian minorities in Abkhazia ( Armenians in Abkhazia ), Azerbaijan ( almost completely fled since the Nagorno-Karabakh conflict ), Turkey , Iraq , Ukraine , Poland , Hungary , Romania and Bulgaria .

Most of the Armenians living in France immigrated in the period 1915–1921. According to official estimates, around 600,000 people of Armenian origin currently live there, around 100,000 of them in Paris. They belong to different religious groups.

About 50,000 to 60,000 Armenians live in Germany; including former guest workers and their families who immigrated to Germany from Turkey since the 1970s, refugees who came to Germany from Iran during and after the Islamic Revolution , and those Armenians who left the country for various reasons during and after perestroika emigrated from the former Soviet Union (as professional specialists, political refugees, asylum seekers, spouses of Russian Germans ).

The transfers to relatives at home are important for the transfer balance of the respective countries of origin. The Republic of Armenia in particular benefits from a large number of money transfers from Armenians living abroad.