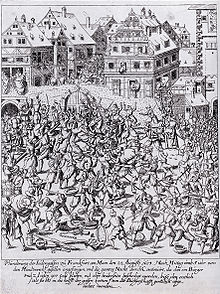 Fettmilch uprising : the Judengasse was looted on August 22, 1614, Frankfurt am Main

Contemporary etching with the so-called Hep-Hep riots against Jews in Frankfurt am Main. This was one of the many anti-Semitic riots that took place in Germany in 1819 in a climate of anti-Semitism that was fueled by various anti-Jewish publications. Those involved in these riots took part in the cry "Hepp Hepp", possibly an acronym for "Hierosolyma est perdita", which means "Jerusalem is lost". 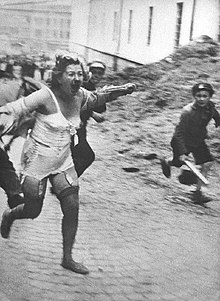 The pogrom stands for violent rioting against people who either belong to a definable social group or are assigned to a real or supposed social group by the perpetrators. As a rule, these are ethnic, political or religious minorities , e.g. B. Members of a particular party or religious community .

In the past, the term was only used to denote excesses against Jews triggered by anti-Semitism ( Jewish pogroms ); however, the use of language has expanded since then.

The term pogrom comes from the Russian погром [pɐˈgrom] and means “devastation”, “destruction”, “riot”. The corresponding verb is громить [grɐˈmʲitʲ] for "demolieren", "destroy", derived from the noun гром ( grom "thunder"). It arose in connection with attacks on Jews in Russia in the 1880s.

It is unclear exactly when it was first used in this meaning in Germany. The conversation encyclopedias have used the term since the beginning of the 20th century (Meyers 1908, Brockhaus 1911).

Function of the term

The political and historical use of the term pogrom has broken away from its etymology. It is used in everyday political language and in historical classifications that have gone beyond the meaning of origin into the historical scientific language (i.e. the technical language of historians). The term is also used historically retrospectively, e.g. B. for medieval events and processes. The term pogrom is often understood to include assault, uprising, massacre, partisan attack, war of extermination and others. However, the reverse is not true.

In-depth explanation of the definition

From the empirically observed using the term pogrom , a can of definitional content distill.

The following historical examples are only sketched. More detailed explanations of the events can be found at the points to which reference is made.

Victims of the pogrom in Yekaterinoslav in 1905, today Dnipro / Ukraine, mostly Jewish children

Victims of the pogrom in Bucharest in 1941

A systematic investigation as to whether and to what extent tangible events in antiquity can be associated with the term pogrom is not tangible due to a variety of historiographical questions.

For the European Middle Ages, the pogroms of 1096 ( First Crusade ), 1146 ( Second Crusade ) and around 1189 ( Third Crusade ) should be mentioned, in which the crusade propaganda made use of medieval anti-Judaism . In the Muslim Al-Andalus the massacre of Granada had already occurred in 1066 .

In 1285, 180 Jews were burned in Munich because they were suspected of murdering a Christian child.

With the onset of the plague , the anti-Jewish attitudes that already existed escalated; in the years 1348 to 1351 they increased to the so-called plague pogroms . Ideological points of reference were, among other things, certain passages in the writings of Paul , who accused Jews of having “killed the Lord Jesus”, as they had done before with the prophets; they now persecuted the Christians "and do not please God and are enemies of all men" ( 1 Thes 2,15  LUT ). Church councils took up these statements to the extent that "the Jews" were guilty of Jesus' death and were therefore " murderers of God ".

In 1421 200 Jews were burned in Vienna's Gesera and the ghetto was razed. In 1450, Duke Ludwig the Rich chased Jews out of the partial duchy of Bavaria-Landshut after accusing them of usury (the last of the persecutions in Munich dates from 1715). In 1492 27 Jews died in Sternberg ; after that all Jews were expelled from Mecklenburg . Bohdan Khmelnyzkyj , founder of the Cossack state in 1654 , was also notorious for anti-Jewish attacks. During these battles, pogroms are said to have killed over 100,000 Poles and Russian Jews.

After the Hep-Hep riots of 1819 (primarily in Germany), the Odessa Jewish pogrom in 1821 is considered the first pogrom of modern times.

The murder of Tsar Alexander II of Russia by the underground organization Narodnaya Volja in March 1881 was blamed on the Jews. The subsequent years of persecution of the Jews were first referred to with the term pogrom .

Between 1903 and 1906, an estimated two thousand Russian Jews were killed in pogroms in Russia. The pogroms of Kishinew in today's Moldovan capital Chișinău became particularly well known . They were probably at least partially fueled by the Russian government. As a result of these events , numerous Jews emigrated to Palestine .

Under the Ottoman Sultan Abdülhamid II, Kurdish and Turkish special forces massacred between 100,000 and 200,000 Christian Armenians between 1894 and 1896 . Others were forced to convert to Islam or were driven into exile.

A conservative Islamic revolt against the Young Turk government culminated in the Christian pogrom of Adana , Cilicia, Turkey. In April 1909, 20,000 to 30,000 Armenians were killed.

Monument of the Warsaw Ghetto Uprising in Yad Vashem

In National Socialist Germany, systematic attacks on opponents of the regime in March 1933, also supported by denouncing sections of the population, met the term pogrom. The actions took on an organized pogrom character, in which SA gangs attacked Jewish businesses in many cities on April 1, 1933, threatened those willing to buy (more here ) and began to separate the Jewish people from the rest of the population. According to the Nuremberg Race Laws of September 1935, the November pogroms of 1938 , which were initially known under the Nazi terminology as “Reichskristallnacht”, marked a further increase in the physical persecution of Jews. The systematic and organized persecution of the Jews turned into the Holocaust , the genocide of a Christian-Western cultural nation of 5.6 to 6.3 million Jews under the "eyes of the world". It was based on racial anti-Semitism and aimed at the complete annihilation of the Jews in Europe and the occupied territories. The persecution and extermination of the Jews became increasingly bureaucratic and systematic from 1941 onwards. Industrial methods were added in 1942.

The term pogrom was fulfilled, but overshadowed by the factory-like mass murders of mainly Jewish people from all over Europe. In addition, there was the devastating persecution of other population groups and political opponents during the National Socialist era.

Historians such as Gerd R. Ueberschär came to the conclusion of the military events after the start of the war : "The Wehrmacht was already involved in the Nazi crimes in Poland." This also included violent resettlements in all areas occupied by the Wehrmacht (see also Crimes of Wehrmacht ). The deportations during the Second World War were not accompanied by demonstrations of support from the population. Nevertheless, the term pogrom is used for the deportations, connected with the image that people are being rounded up by uniformed men. Task force groups murdered around 60,000 Polish intellectuals, including 7,000 Jews, during and after the attack on Poland by the end of 1939. The Wehrmacht leadership remained involved in these lethal activities. More than 3000 Polish soldiers were murdered by German soldiers away from the fighting. Over 16,000 civilians were executed between September 1 and October 25, 1939. It can be assumed that at least during the German invasion, more than half of the victims were due to the Wehrmacht.

Serbian Orthodox nuns in the Devič monastery, which burned down during the pogrom-like riots in Kosovo in 2004

The pogrom of Istanbul in 1955 was directed against a Christian minority, predominantly of Greek origin, in the Turkish metropolis; some historians see an influence of the then government and a connection with the Cyprus conflict . Pogroms in Turkey were also directed against the Alevi population , such as the Kahramanmaraş pogrom from December 19 to 26, 1978 or the Çorum pogrom on July 4, 1980.

Between October 31 and November 2, 1984, angry mobs killed around 2,800 Sikhs after the assassination attempt on Indira Gandhi .

Recent examples: the riots in Rostock-Lichtenhagen (1992), the Sivas arson attack in Turkey in 1993, riots in Kosovo in 2004 primarily against the Kosovar Serb minority, but also other non- Kosovar Albanians , riots in South Africa against African ones Foreigners (2008), in Kyrgyzstan against Uzbeks (2010) and in Eastern Europe against Roma, including at least five pogroms by right-wing extremist groups against Roma in different regions of Ukraine.