The swan flower ( Butomus umbellatus ), also called Wasserliesch , flowerbush , Doldige Schwanenblume or Wasserviole , is the only plant species in the monotypic genus Butomus and the monogeneric family of the swan flowers (Butomaceae). It thrives as a swamp plant on the banks of water and in wetlands.

The Hamburg Nature Conservation Foundation named the swan flower Flower of the Year 2014.

The common name "swan flower" probably refers to the shape of the ovaries with their gooseneck-like extension. The frequently used further term “rush” should be avoided as this can lead to confusion with Scheuchzeria palustris .

The swan flower grows as a perennial herbaceous plant and reaches heights of 50 to 150 cm. There is a short, white, creeping, monopodial, up to 1 cm thick rhizome ; Runners are missing. It contains clear milky juice .

The leaves are basal and more or less arranged in two rows. They are at least divided into leaf sheath and leaf blade, a petiole may be present. The shape of the leaves depends on the water level: If the plant is at a greater depth, it develops ribbon-shaped diving leaves that float in the water. The overwater leaves, which develop when the water level is low, are grass-like, linear and rutty (triangular); they are up to 1 cm wide. The stomata are paracytic.

The flowering period in Central Europe extends from June to August. At the end of a long, round inflorescence stem there is a golden inflorescence that contains up to 30 flowers. The inflorescence is covered by two or three bracts , which are ovate with a length of 25 mm and a width of 6 to 8 mm and have a pointed upper end. The individual flower stalks are between 5 and 10 cm long. 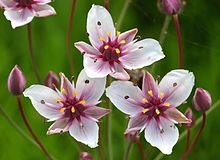 Structure of the flowers of a swan flower

The hermaphroditic, radial symmetry flower is threefold with double perianth . There are two circles, each consisting of three bracts , which can be significantly different or very similar in the two circles. The color of the bracts is green to white, pink to purple or sometimes brownish and often darker or green-veined. The stamens are also arranged in circles of three, with the outer circle doubled so that there are a total of nine stamens. The stamens are flattened along their entire length. The three-cell pollen grains have an aperture. In the center of the flowers are constantly top six red, bottle-shaped, completely free to deformed only at their base carpels arranged, having at its tip in each case of a yellowish scar end. In the cross-section, epidermal layers can be seen between the individual carpels. Each carpel contains a large number (20 to 100) of (laminar placentation) lateral and anatropic ovules . The stylus is curved.

The flowers of the swan flowers smell of honey. The nectar is released in the form of small droplets at the base of the carpels. Thus primarily be flies , hover flies , bees and bumble bees are active so as pollinators attracted, ( Entomophilie ). The flowers are protandric and self-sterile.

After pollination , the fruits develop, with the previous flower stalks growing again by a few centimeters. The follicles of the swan flower are raised further from the tall vegetation on the banks. The main purpose of this is to make use of the wind to spread the seeds. There are some follicles together in a collective fruit. The follicles have a relatively long beak. They open along their belly seam as they ripen and contain six to many seeds. When the wind moves the elastic inflorescence stem of the swan flowers, the numerous seeds are gradually scattered. Because of this spreading mechanism, the swan flower is also called a wind spreader . The starchy, only 0.2 to 0.4 mm long seeds have a leathery, phytomelan-containing seed coat (testa) and contain a straight embryo and no endosperm .

The seeds of the swan flower are buoyant and thus drift to new settlement sites. This spreading strategy , known as nautochory , is typical of many aquatic and marsh plants.

The natural distribution area includes the climatically moderate zones of Eurasia and North Africa (Eurasian-Mediterranean). In Central Europe, the swan flower has become quite rare in many places. In North America the swan flower was introduced as an ornamental plant; in the meantime it is regarded as an invasive plant in some states because of its wide spread .

Phytosociological the swan flower is the characteristic species of association Butometum umbellati from the association of the reed reeds (Phragmition).

The swan flower grows in eutrophic , stagnant to slowly flowing water in bank reeds and is quite heat-loving. It can be found in large stocks in floodplain waters of the Oder , Elbe and Rhine rivers, for example . The swan flower tolerates strongly changing water levels and settles mainly on sandy-loamy mud soils of fens and floodplains . It occurs more in the lowlands than in the mountains.

Within the order of the Alismatales , the Butomaceae are a sister group of the Hydrocharitaceae .

The species and generic name was first published in 1753 by Carl von Linné in Species Plantarum , 1: 372. The publication of the family name Butomaceae is considered to be that of Charles François Brisseau de Mirbel in Histoire naturelle, générale et particulière des plantes , 8, 1804, p. 194.

Some authors, however, distinguish a second species in the genus:

The botanical genus name Butomus is derived from the Greek words for bous for ox and temnein for cutting, this refers to the leaves mistakenly thought to be sharp-edged and on which cattle could injure themselves. However, the ancient Greek word boutomos, boutomon referred to an unidentified marsh plant. The epithet umbellatus for umbrella shape has the doldigen inflorescence back.

Use as food and plaiting

The rhizome of the swan flower, which contains up to 60 percent starch, is edible. In Asia, this subterranean, rooted stem is occasionally dried and processed into flour. The Kyrgyz , Kalmyks and Yakuts bake the rhizome in ashes and use it like bread . In Central Europe the rhizomes were also eaten during times of need. Similar to pond rushes , the stems were previously used to weave baskets.

In the past, rhizome and seeds were used as a remedy. Taken internally, it should fight dropsy . Applied externally, the swan flower was considered a "dissolving and softening agent".

Use as an ornamental plant

The swan flower is planted as an ornamental plant on garden ponds. We owe breeding to the very blooming, blooming and almost white variety "Schneeweißchen" as well as the somewhat later blooming, lilac-red and less garden-worthy "Rosenrot".