Habitus (overall appearance of the plant)

Marsh marigolds are typical plants found on the edges of waters 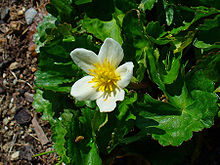 Illustration of the Marsh marigold in Otto Wilhelm Thomés Flora of Germany, Austria and Switzerland , Gera 1885

In the past, the buds of the marsh marigolds were pickled in vinegar and eaten as so-called "German capers "

Flower bud just before its unfolding

The marsh marigold is a deciduous, perennial, herbaceous plant that, depending on its location, reaches heights of between 15 and 60 centimeters. A strong rhizome serves as a storage organ . The arching ascending to upright, hollow and bare stems are branched in the upper area.

The basal leaves are long stalked; In contrast, leaves that are higher up on the stem have almost no petioles. The dark green, often shiny leaf blades are heart-shaped to kidney-shaped with a diameter of up to 15 centimeters, undivided and notched on the edge.

The flowers appear from March at the end of first spring and bloom until April or June, depending on the location. Occasionally, there is a weaker second bloom between July and October. There are usually several flowers on each stem. The hermaphroditic flowers are radial symmetry . The inflorescence usually consists of five broad oval tepals that are up to 2 inches long. There is no calyx. There are numerous yellow stamens . There are five to fifteen closely spaced, free carpels . The nectar glands are located at the base of the carpels.

From each fertilized carpel a slim developing follicle , wherein the mature follicles are arranged in a star-shaped. The ripe dark brown seeds are about 2.5 millimeters long and arranged in two rows in the follicles.

The marsh marigold is a hemicryptophyte .

The simple cup flowers are shiny golden yellow due to the carotenoids . Only areas that were visible to UV- sensitive animals were detected on the tepals, which were interpreted as sap marks . The flowers contain plenty of pollen and nectar . Cross-pollination is carried out by beetles, flies and bees, with hoverflies in particular often being observed on the flowers. When it rains, the flowers are open and fill with water. The anthers and stigmas are then at the same height as the water level in the flowers, so that self-pollination occurs (rain pollination).

Spreading strategies of the marsh marigold

The marsh marigold is ideally adapted to spreading with the help of water. As with many other buttercups, the thin fruit walls of the follicles dry out as they ripen and gradually open up along their ventral seam. However, the lower part of this follicle remains closed. This only opens when the follicle swells due to rain or contact with water.

When immature, the seeds of the marsh marigolds are attached to the pericarp with small, short stems. When the seeds are ripe, this stalk dries off. The star-shaped arranged follicles are ripe and directed upwards. If raindrops hit these fruits, the loose seeds are washed out and spread by the impacting raindrops. Because of this distribution mechanism, the marsh marigold is one of the rain inundates (so-called ombrochory ).

The seeds of the marsh marigold are also buoyant (so-called nautochory ). They are provided with a floating fabric, which consists of air-containing cavities and which holds the seeds on the surface of the water. With the help of this spreading mechanism, marsh marigolds are able to spread along the banks of a body of water.

The marsh marigold is widespread in Europe , temperate and northern Asia, and northern and arctic North America . It is one of the circumpolar plant species. In Europe it is distributed north to Iceland and in arctic Russia .

The marsh marigold grows in marsh meadows, at springs, streams and ditches. It is also found in swamp and floodplain forests . It tolerates changing water levels well. The moisture index (F-index) in the nine-step scale according to Ellenberg is 8. Frequent companion plants of the marsh marigold are meadowsweet , cabbage thistle , snake knotweed , marsh forget-me-not , cuckoo carnation and black alder . In terms of plant sociology, Caltha palustris is the eponymous association character of the marsh marigold meadows (Calthion palustris). These are nutrient-rich wet meadows and tall herbaceous meadows in damp and wet locations. It is also a companion species in alder forests (Alnion), in hardwood alluvial forests (Alno-Ulmion) and in reed beds (societies of the Phragmitetalia) as well as the spring meadows (Montio-Cardaminetalia).

In the Allgäu Alps , it rises on the Rappensee in Bavaria to an altitude of 2047 meters.

The coat of arms of the municipality of Bebensee shows u. a. a marsh marigold.

The marsh marigold population declines when wet meadows are drained, streams straightened and ditches are thrown in (piped). The keeping of dairy cattle in stalls, in which the cows are fed with ensiled grass, has also indirectly led to a decline in the population. To simplify the machine mowing, the meadows were leveled and depressions and hollows were removed, which offered the plants good site conditions due to the water that had accumulated there. The marsh marigold is currently only classified as an endangered species on the Red Lists of Lower Saxony , Brandenburg , Berlin and Hamburg , but is in decline nationwide.

The first publication of Caltha palustris was in 1753 by Carl von Linné . A synonym for Caltha palustris L. is Caltha polypetala Hochst. ex Lorent . The specific epithet palustris is derived from the Latin word palus for "swamp" and indicates that the marsh marigold can be found in damp locations.

The marsh marigold as a garden plant

Since it has become common to create ponds or moats in private gardens, the marsh marigold has also been available in gardening shops. Horticultural efforts have also produced some varieties that differ from the original species:

The rich insect life on the marsh marigold and their interesting reproductive mechanism via follicles can only be observed in unfilled varieties and best in the original species.

The marsh marigold from an educational perspective

The marsh marigold is particularly popular with children. So already writes Jerome Bock in his 1539 published standard work The Kreütter book : "The children have their beautiful kurzweil and joy with disen gold flowers. Are now not used in medicine. "

The marsh marigold as a poisonous plant

Marsh marigolds are classified as slightly poisonous to poisonous. Symptoms of poisoning are mainly due to the anemonines , saponins , aporchinal alkaloids (including magnoflorin ) and triterpene lacones (including caltholid ). In sensitive people, symptoms of poisoning can already occur through external contact with the plant, which irritates the skin and mucous membranes . This can lead to a rash and occasionally swelling of the face after four to five hours.

Consumption of parts of the marigold can lead to dizziness, vomiting and cramps as well as water retention. Depending on the severity of the poisoning caused by the consumption of plant components, countermeasures include inducing vomiting, taking activated charcoal, and gastric lavage .

When dried as part of hay or silage , Marsh marigolds are not poisonous.

Use as food and luxury goods

Despite the toxicity of the plant, the marsh marigold was used in the past as food , coloring plant for dairy products and as a luxury food . The leaves of the marsh marigold were traditionally used as salad greens in Spanish cuisine . In the English kitchen it was used to refine or colorize the taste of country wine and vinegar. The buds of the pungent-tasting plant were traded in times of need as a substitute for capers, but today they are hardly of any significance as food adulterations.

If the plant components are boiled, the toxicity is reduced. It was therefore often recommended to change the cooking water at least twice.

In the past, cooked roots and buds that had not yet opened were also considered edible. The flower buds were pickled in vinegar and eaten as a substitute for capers . They were called "German capers". Due to the anemonine content, vomiting, diarrhea and a rash can occur after copious consumption of such “capers”. From today's point of view, one should refrain from consuming components of the marsh marigold.

In the Roman and Greek antiquity , the Marigold was as a medicinal plant unknown. It was first mentioned as a "must flower" in an Alsatian manuscript from the middle of the 15th century. Here the water distilled from the flowers was recommended for the treatment of "dorren augen geswer". Hieronymus Brunschwig took over this information in his small distilling book . He called the marsh marigold «moss blůmen», «gel mey blůmen» and «dutter blůmen».

In his herbal book, published in 1539, Hieronymus Bock interpreted the marsh marigold as the “chrysanthemon” of Dioscorides , which the Romans also called “caltha”. Bock took over the indications given by Dioskurides: 1. The finely ground flowers with wax ointment spread skin tumors. 2. The herb with the flowers drunk in wine after a steam bath drives jaundice away.

The "chrysanthemon" of Dioscorides is now interpreted as a crown growth flower.

In actual folk medicine , the marsh marigold was only used sporadically as a medicinal plant. The herbaceous ingredients were used in Central Europe for skin diseases and menstrual disorders. In Russia it was used as a diuretic and laxative. The fresh leaves were also viewed as a wound healing agent and applied to insect bites. Furthermore, due to their properties as a moist swamp plant, they should be able to cure dry injuries such as broken bones, smoker's lungs or scabbed wounds. In the evidence-based medicine , the marsh marigold is no longer used; Today's use of the plant for skin rashes , bronchial diseases and menstrual cramps is limited to homeopathy .

Other German trivial names allude to the golden yellow flower color. Depending on the region, it is also known as lard flower, buttercup, egg flower, meadow gold or golden rose. However, the most common popular name is marigold. In parts of Switzerland this type of plant is known as Bachbummele.

The marsh marigold in superstition

Like many other spring plants, the marigold was considered to ward off demons by many peoples. Collected at Walpurgis and strewn in front of the door of the cattle shed, it was supposed to keep the witches away. They were also given to the cattle to eat so that the butter had a beautiful, yellow color all year round. In Denmark , Sweden and Ireland the plant (collected from Walpurgis and Georgi) was also considered to be magical.

The marsh marigold was voted “ Flower of the Year 1999” in Germany. With this choice, attention should be drawn to the loss of species caused by the straightening of streams and the draining of previously damp meadows and fens.