The corn poppy is a deciduous , annual to biennial herbaceous plant that reaches heights of 20 to 90 centimeters. Milky juice is produced in articulated and networked milk juice tubes. The little branched stem is relatively thin and hairy.

The flowering period extends from May to July. The flowers are solitary, terminally on the stem. The hermaphrodite flowers are radial symmetry and four-fold with a double flower envelope . The two hairy sepals fall off when the flower bud is opened. The petals are irregularly "crumpled" in the bud. The relatively large corollas with a diameter of 5 to 10 centimeters can vary considerably in size. The four scarlet to purple, rarely white or purple petals have a large black, often white-rimmed spot in the lower area, are very thin. They resemble a bit of wrinkled paper and are therefore easy to spot. There are about 164 stamens present. The short conical scar disc usually has 10 (5 to 18) scar rays.

The typical capsule fruit with a length of 10 to 22 millimeters up to twice as long as it is wide and rounded at its base contains a few hundred seeds. The capsule fruit is divided into incompletely fanned pore capsules (= "scattering boxes") by numerous "false partitions" (= growths of the seed ridges). The dark seeds ("poppy seeds") are very small with a diameter of up to 1 millimeter. 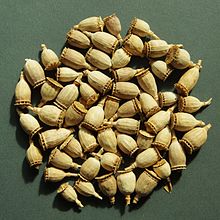 The corn poppy is a winter annual , more rarely a summer annual semi-rosette plant and a mesomorphic therophyte . As deep roots , its roots reach a depth of 1 meter.

A specimen only blooms for two to three days. The nectar and fragrance-free flowers are formerly male "pollen disc flowers". The petals, which are colored red by anthocyanins ( e.g. mecocyanin ), are likely to be seen blue-violet by the red-blind bees who are sensitive to UV light because of their strong UV reflection. The black stain marks are created by superimposing blue and red color cells (subtraction color). Around 2.5 million green-black pollen grains are produced per flower ; this unusually high number is only exceeded by the peony . The pollen presentation is subject to a daily rhythm. It is most plentiful during the main visit until 10 a.m. The “strip-shaped” scars lie on a disc of the ovary, which serves as an approach point for various insects . Even wind pollination is possible. The flowers are self-sterile .

The typical capsule fruits are formed, which contain 2000 (-5000) very small (up to 1 mm), kidney-shaped, hard, raised, reticulated veined and pitted, dark seeds (poppy seeds). The thousand grain mass is only approx. 0.11-0.125 grams. The widened roof immediately above the pores serves as a vestibule so that the seeds are blown out more quickly: "Centrifugal wind spreader". The seeds rattle in the capsule fruit and are scattered by the wind. The flight distance is up to 4 meters and is much larger in strong winds. The seeds are only scattered in dry weather. The mostly protruding bristle hairs of the stem and the capsule roof serve as Velcro organs: animal shakers. Human expansion as a follower of culture. Fruit ripening takes place from July to August. The seeds contain an oil-rich nutrient tissue, which is typical for wind propagation, since fats of the same weight are twice as rich in energy as carbohydrates . The seeds are light germs .

The well-known popular writer RH Francé has applied for a remarkable patent , namely a salt shaker based on the poppy seed capsule. This is considered a pioneering achievement in the field of research in bionics . Francé himself, however, used the term “biotechnology” in his book “The Plant as Inventor” (1920), which is now defined differently.

Poppy seeds in a barley field in Mecklenburg

The exact area of ​​origin of the poppy is not known, but Eurasia or North Africa (where make-up is still made from the flower in a traditional way) are assumed to be areas where arable farming has been practiced for a long time . With arable farming the poppy spread all over the world ( permafrost zone to subtropics ), but prefers the northern temperate zone. With this spreading strategy , the poppy belongs to the so-called hemerochoric plants, i.e. the plants that, through human intervention, colonize areas in which they are not originally at home and which they would not have reached without the conscious or unconscious spread by humans. A typical way of spreading the corn poppy is the contamination of grain seeds by corn poppy (so-called Speirochorie ).

The poppy is found widespread in grain fields, rarely also on rubble, on paths, in train stations, etc. It is also sown to green wasteland. He is an archaeophyte ("old citizen") and has been a cultural companion since the Neolithic . Due to the use of herbicides , it has often decreased significantly in grain fields, but it often occurs in large quantities, for example on unsprayed, open embankments. On loose and stony fallow land without competition, the poppy forms populations that are pushed back over time by grasses and other plants (pioneer plant).

Corn poppy prefers warm, mostly calcareous clay soil. According to Ellenberg , it is an indicator of freshness, growing in nitrogen-rich locations and a class character of the cereal weed corridors (Secalietalia).

Many alkaloids with a total content of 0.11–0.12% can be detected in the poppy . In principle, all parts of the plant contain the weakly poisonous rhoeadin as the main alkaloid (content approx. 0.06%), especially the white milky sap. Other ingredients worth mentioning are Allocryptopin , Berberin , Coptisin , Papaverin , Roemerin and Sinactin as well as Depside , mucilage , tannins , meconic acid and mecocyanin .

The petals were previously used to make red ink because of their anthocyanins , derivatives of cyanidin and pelargonidin .

All parts of the plant are poisonous, especially the milky sap . The young pre-flowering leaves, corolla leaves, the young green fruits and seeds are safe when used moderately. However, after consuming large quantities of seeds, gastrointestinal complaints with abdominal pain can occur. In the past, poisoning with corn poppy was more common in children, which can lead to paleness, tiredness, abdominal pain and vomiting. Apparently rhoeadin has an anticonvulsant effect.

First, you can use the young leaves before they bloom, for example in salads. They taste like cucumber with a hazelnut flavor . The red petals are suitable as an edible decoration. You can also eat the young, still green fruits. The leaves can be cooked like spinach , for example with fried shallots and a little cream .

The dried flower petals are used as drugs. The red poppy flower petals are nowadays contained in tea blends for various indications as a jewelry drug without any claim to be effective. It used to be used in the form of a syrup against coughs and hoarseness and as a sedative for small children, for pain, sleep disorders and restlessness. Since there is no evidence of effectiveness, these applications have been abandoned.

Garden shapes from Papaver rhoeas in various color variants, especially as filled varieties, are available in stores under the name of silk poppies .

An oil can also be obtained from corn poppy seeds, which has properties similar to those of opium poppy seeds ( poppy seed oil ).

In English-speaking countries, the poppy is a symbol of the memory of fallen soldiers . This goes back to the poem In Flanders Fields and the First World War , in which the poppies first began to bloom on the freshly raised mounds of the soldiers' graves. The stylized boutonniere consist of a poppy flower, also with a leaf.

In the Persian-speaking world, the poppy symbolizes love. One of the most famous poems by the modern Persian poet Sohrab Sepehri says: "Yes, as long as the poppy exists, we must live as long as it is."

Furthermore, its black center symbolizes the sufferings of love.

In heraldry, the poppy is listed as a rattle rose .

The corn poppy was the flower of the year in Germany in 2017 . With the appointment, the Loki Schmidt Foundation wants to draw attention to the fact that wild flowers are increasingly being lost. Every second wild herb species is on the red list in at least one country due to agriculture.