The corn wheel ( Agrostemma githago ), more precisely common corn wheel , is a species of plant that belongs to the carnation family (Caryophyllaceae). It is probably originally from the Mediterranean region. As a field herb , which is rarely found in Central Europe because of its toxicity and modern agriculture with seed cleaning, it is one of the endangered plant species. Further German trivial names for the Kornrade are Ackerrade , Ackerkrone , Kornnelke and Kornrose ; in Low German it is also called Klockenblume and on the Rhine Pisspöttken . The garden shape is also referred to simply as a wheel . 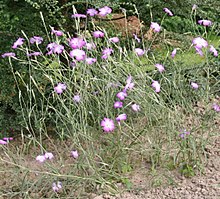 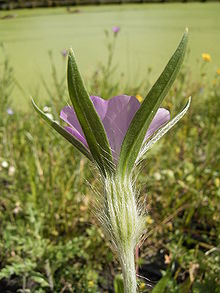 Blossom from the side 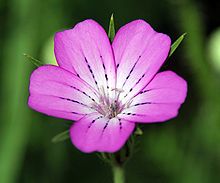 The corn wheel is an annual herbaceous plant and reaches heights of growth of usually 60 to 90 (50 to 100) centimeters. The spindle-shaped taproot can be up to 90 cm long. The above-ground parts of the plant are pressed down with shaggy gray-felt hair. The upright stem has hardly any, if any, branches only in the upper area, sometimes a few side branches.

The leaves are arranged opposite one another on the stem. The simple leaf blade is linear with a length of 4 to 13 centimeters and a width of 2 to 10 millimeters, narrow linear-lanceolate with a somewhat overgrown base and a pointed upper end as well as a raised central nerve.

The flowering period extends from June to August. The flower stalks are very long. The mostly hermaphrodite flowers are radially symmetrical and five-fold with a double flower envelope . The five 3 to 6 centimeters long sepals are fused into a 1.2 to 1.5 centimeter long tube with shaggy hair on the outside and the 2 to 3, rarely up to 4 centimeters long, calyx tips are longer than the petals. The five 3 to 3.6 centimeters long petals are nailed white, narrow-wedge-shaped and the purple-violet to pink, obovate crown tongues have a slightly edged upper end. There is no secondary crown. The ten stamens protrude from the corolla. The ovary is unicameral. The five free, hairy styles tower above the corolla.

The fruits ripen between July and September. The egg-shaped, septicidal capsule fruit opens with five teeth and contains many seeds. With a length of 1.2 to 1.8 centimeters, the capsule fruit is only slightly longer than the calyx. The black seeds are egg-shaped to kidney-shaped with raised, pointed warts, with a length of 2.5 to 3 millimeters.

The corn wheel is a winter annual, hibernating green, scleromorphic, mesomorphic therophyte . As a field weed in grain , it is ideally adapted to its location. The leafy sepals protrude from the grain with the flowers and are used for photosynthesis . The seeds are usually only released during threshing. The species has roots up to 85 centimeters deep.

From an ecological point of view, it is a matter of "plate flowers". The corn wheel is therefore gyno: the flowers are mostly hermaphroditic, but there are also purely female specimens. Pollinators are butterflies .

The spread of the seeds is highly dependent on people. Because the capsules are narrowed at the top, the large seeds are often only released when the wall is weathered or destroyed during threshing . Before the introduction of modern methods of seed production, the seeds could hardly be separated from the grain because of their similar size and were therefore sown again. As an exception, capsules were found in Hessen that open when the fruit is ripe .

All parts of the plant are highly poisonous. Three to five grams of the seeds are considered toxic. Due to the toxicity of the seeds, the grain wheel was for a long time a "dreaded field weed" because the cleaning of the grain was insufficient. Poisoning is very rare today; In addition, the grain wheel has almost been eradicated as a field weed thanks to modern seed processing.

The grain wheel is believed to be native to the eastern Mediterranean. According to other authors, it is native to Europe, the temperate zones of Asia and North Africa. In North and South America, in Australia, on the Canary Islands and in southern Africa, the corn wheel is a neophyte . It was found frequently in grain fields, fallow land and wasteland since Roman times. The corn wheel is dependent on spreading with seeds . The chain of spread has been interrupted by modern seed cleaning ( trieur ). The grain wheel is classified as safe in Central Europe. In 1996, the grain wheel in Germany was rated as critically endangered on the Red List of Threatened Species .

The Kornrade thrives best on dry soils that are moderately alkaline and nitrogenous . It thrives in companies of the Secalietea class.

After the corn wheel itself was no longer available in botanical collections as teaching material for phytomedicine students , this species has been searched for and found all over the world. It is now even available in seed shops. It is easy to grow in a wide range of ecophysiological conditions, including in an ornamental garden. There is a white culture.

Flower of the year

The grain wheel was chosen as flower of the year 2003 by the Hamburg Nature Conservation Foundation and the Loki Schmidt Foundation for the protection of endangered plants .

The first evidence of the grain wheel in Germany comes from the funnel cup period ( Walternienburg-Bernburg culture ) wall chamber grave Kreienkopp near Ditfurt am Harz . In the early Neolithic it was unknown as a weed, probably because it was a winter seed weed . In England three references from the containment of Long Stones Field originate Avebury ( Wiltshire ); but since little evidence is otherwise known from pre-Roman times, Ruth Pelling et al. contamination from later layers is possible. In France, Bronze Age remains (Bronze IIa) come from the Baume Layrou ( Trèves , Gard ) in the Trèvezel valley in Languedoc.

The plant names listed in the herbal books of antiquity, late antiquity and the Middle Ages can only be assigned very uncertainly to the plant species known to us.

In the 14th century, Konrad von Megenberg described the poisonous effect of the corn wheel in his book of nature : "... whoever eats the herb ſâmen, he makes him drunk and vnſinnich."

In 1479 , Vitus Auslasser reproduced the grain wheel under the names Zyzania , Ratem and Prawn korn pluem . In the small distilling book , Hieronymus Brunschwig recommended using the whole plant collected in May to produce a distillate from the grain. He gave the following indications for this distillate: A paralysis (“dwindling of the glider”). B Migraine (“nail in the eye”). C fistulas

The fathers of botany ( Otto Brunfels , Hieronymus Bock and Leonhard Fuchs ) only briefly described the plant and were very reluctant to recommend applications. The toxicology of the plant was researched in the 19th century .