Henry Ernest Sigerist (born April 7, 1891 in Paris , † March 17, 1957 in Pura , Canton Ticino) was a Swiss -US medical historian and medical theorist . He worked mainly in Leipzig and Baltimore .

In 1919 Sigerist visited Karl Sudhoff in Leipzig. He then shifted his main focus to the field of medical history and completed his habilitation in Zurich in 1921 with a thesis on early medieval antidotaria.

After the first international congress for the history of medicine in Antwerp, the “Société Internationale d'Histoire de Médecine” was founded in 1921. Strong forces in this society obtained a boycott against Germany and against the nations allied with Germany in the war . Karl Sudhoff in Leipzig and Max Neuburger in Vienna were particularly affected by this boycott . Thereupon Sigerist boycotted the 1925 congress in Geneva together with the Anglo-Saxon medical historians Fielding Hudson Garrison , Arnold C. Klebs , Victor Robinson and Charles Singer . The remaining American group that took part succeeded in passing a resolution stipulating that all nations could be members of the international society in the future.

In 1925 Sigerist took over the chair for the history of medicine in Leipzig from Karl Sudhoff as a full professor. His employees in Leipzig included Johann Daniel Achelis , Ernst Hirschfeld, Walter Pagel , Stephen d'Irsay , Erwin H. Ackerknecht and Owsei Temkin .

In 1926 the first chair in the history of medicine in America was established at Johns Hopkins University (Baltimore) with William Henry Welch as chair holder. In 1927 Welch went on a study trip to Europe. It was there that the Leipzig Medical History Institute made the deepest impression on him. In 1928 he was one of the founding members of the Paris Académie internationale d'histoire des sciences . In 1930/31 Sigerist did a research stay in the USA with a focus on Baltimore. During this time he transferred the interim management of the Leipzig Institute to Temkin. In 1932 Welch brought Sigerist to Baltimore as his successor. Sigerist took Owsei Temkin with him from Leipzig. To Marcel H. Bickel (2002):

"Both the Nazi enemy Sigerist and the Jew Temkin would have had no future in Germany just a year later."

Karl Sudhoff, who joined the NSDAP on May 1, 1933, was honored with lectures on November 27, 1933 in Baltimore on the occasion of his eightieth birthday. In an obituary Sigerist 1939 described his teacher Sudhoff: "He was an outspoken personality, a natural leader , as he liked to call himself, fierce in his sympathies and his antipathies."

Due to his close contact with Welch, Sigerist was a kind of persona grata during his lifetime. That changed when Sigerist began to publicly comment on controversial discussions and current events. In Leipzig he had already understood the history of medicine as part of general cultural history and raised this beyond the limiting description of the development of a specialist discipline. During the years in America he continued in this direction and now also took up social, economic and political conditions that influence the course of medicine. This enabled him to present the developments in medicine in a problematic and critical manner and to include them in the general historical process.

From 1932 to 1947, Sigerist was in charge of the Chair of Medical History in Baltimore. 1932 to 1945 was the time of the New Deal Roosevelt. When Sigerist came to America in 1932, the Committee on the Costs of Medical Care (CCMC) published its results in a report. This report summarized the opportunities for health care in the United States and provided an impressive description of the inequalities in the health care system. In response, plans were developed that aimed at ensuring that medicine should be equally available to the entire American population. The discussion about that report and about national health insurance was in full swing. Sigerist has taken a stand on these controversies and has advocated compulsory national health insurance.

Under Roosevelt, the Social Security Act was passed in 1935 with guidelines for old age pensions, unemployment insurance and assistance programs for the needy. National health insurance legislation was not included in this administrative act. It was only realized in 2010 in the Patient Protection and Affordable Care Act (Obama Care). The main obstacle was the opposition of the powerful American Medical Association (AMA), which viewed all attempts at national health insurance as an encroachment on the part of the state in the medical field and labeled it "state medicine" (nationalized medicine) and "un-American" - were too strong. As early as 1930, the AMA had defamed the socio-political demands of the " Association of Socialist Doctors in the USA " as "made in Germany".

During the Spanish Civil War, Sigerist represented the Republican side and worked in the “Bureau for Medical Aid for Spain”. He participated in the organization of the American Soviet Medical Society, for whose journal he was the editor. During McCarthy's anti-communist smear campaigns , Sigerist's acquaintance with Owen Lattimore was an additional source of defamation as a communist and propagandist. Finally, he was even summoned to a meticulous investigation by the "Civil Service Commission", where he had to comment on alleged communist activities and contacts. 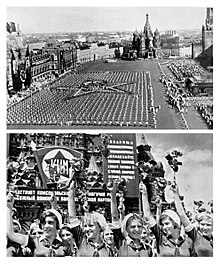 He visited the Soviet Union in 1935, 1936 and 1938 and published a work on the Soviet health system in 1937 , which he described as the most advanced system at the time. In doing so, he took over Russian statistics without critical examination and, according to the judgment of his student Erwin Heinz Ackerknecht, had Potemkin villages shown to him . During his stay in 1938, he visited his friend, the Jewish doctor and medical historian Richard Koch in the Caucasian seaside resort of Jessentuki , to which the Koch family had emigrated in 1936. Sigerist supported the Koch family and was probably also involved in their emigration. In any case, Koch wrote to his son in 1946 that Sigerist “did so much for us in the hour of need” .

Sarajevo 1938. 11th Int. Congress for the History of Medicine

The eleventh International Congress for the History of Medicine took place in Yugoslavia in autumn 1938. Sigerist also used this congress to see the progress that has been made in the Yugoslav health system with the collaboration of his friend Andrija Štampar . In 1939, Sigerist wrote a comprehensive report for the Bulletin of the History of Medicine with details on the history and state of the Yugoslav health system.

This report also contains many comments and allusions to the political tensions in Europe in the autumn of 1938. From Switzerland, Sigerist took the Simplon-Orient-Express via Italy to Zagreb and he had a large inscription with the when he left the Simplon tunnel Italian motto «CREDERE - OBBEDIRE - COMBATTERE (Believe - Obey - Fight)». That reminded him of another large poster with the inscription "EIN VOLK - EIN REICH - EIN FUEHRER" that the Germans had put up in Breisach across from France. The French replied with a poster of the same size with the words “LIBERTÉ - ÉGALITÉ - FRATERNITÉ”.

According to Sigerist's observation, the size of the delegation that each country sent to the Congress was dependent on the influence that these countries wanted to exert on Yugoslavia. So Germany sent the largest, well-disciplined delegation with Paul Diepgen as leader , which not only represented the German Reich and the University of Berlin, but also the University of Vienna. The second largest delegation with a dozen members was from Italy. The absence of some very prominent members of the International Association was noticeable. Arturo Castiglioni , who so far had not been absent from any congress and was the official representative of Italy on the association's committee, had not received an exit permit from his government. The same was true for the Viennese medical historian Max Neuburger and for other outstanding colleagues who, on racist grounds, had not received permission to leave their country.

From August to December 1939, Sigerist stayed in South Africa at the invitation of the South African Universitie's Lectureship Committee . There he held lectures at the University of Cape Town , Huguenot University College in Wellington , Rhodes University College in Grahamstown and at Witwatersrand University in Johannesburg . At the invitation of the Ministry of Education, he gave a lecture in Pretoria and the official part ended with a speech in front of the Pietermaritzburg and Durban branches of Natal University College . But Sigerist also came to South Africa to study. He visited health care facilities wherever and whenever he could. He summarized the impressions he gained in a radio address that he was able to give on the occasion of his departure from South Africa. He came to the conclusion:

"I got the impression that only by gradually building up a public health service can health be brought to all people in South Africa, regardless of their race and income."

In 1944 the Socialist Government of the Canadian province of Saskatchewan won an election with the promise, among other things, of introducing a comprehensive system of social health services. To carry out this promise, it set up a Health Services Survey Commission. Sigerist was invited by the newly elected Prime Minister Tommy Douglas to lead this commission and he toured the province from September 3 to October 3, 1944. In closing, he presented the Minister of Health with a report outlining a program for the gradual socialization of the health system in Saskatchewan.

Through Sigerist's mediation, Milton I. Roemer was able to work in Saskatchewan from 1953 to 1957 in setting up the first social insurance system for hospital care in Northern America.

Henry and Emmy Sigerist with their grandson Christopher in Pura 1952

In 1947 he left America to work as a Research Associate at Yale University in Pura on his project to publish a manual on the history of medicine.

Erwin H. Ackerknecht, who wrote a dissertation with Sigerist in Leipzig in 1931, entitled Contributions to the History of the Medical Reform of 1848 , remembered his teacher Sigerist in 1957:

"For better or for worse, he never became a Marxist, despite his political sympathies."
"Is it more than a coincidence that his favorite century in medical history was the cosmopolitan 18th century,
aristocratic even in its revolutionaries, philanthropic, enlightening and yet devoted to beauty? "

The medical historian Sigerist began in 1919 as a student of Sudhoff, that is, as a philologically oriented medical historian. He completed his habilitation in 1921 with a thesis on early medieval antidotaries and in 1927 he edited the late antique Pseudo-Apuleius together with the classical philologist Ernst Howald . His grand plan to collect and analyze all early medieval medical manuscripts, on which he worked intensively until 1934, remained unfinished. Around 1930, sociological considerations began to appear more and more prominently in his work, until they became dominant in his American era and became his real legacy.

Issues appeared in New York (1937 and 1947), London (1937), La Habana (1944), Bombay (1947), Shanghai (1950) and Osaka (1952). It was particularly widespread in the former British Empire through the initiative of the Left Book Club, which printed a special edition and sold it at an extremely low price. A summary version was published in October 1942 during the German occupation in Belgium by some doctors from the Belgian underground with the title “Dr. Antoine, à propos d'un cas d'ulcus duodénal “ printed.